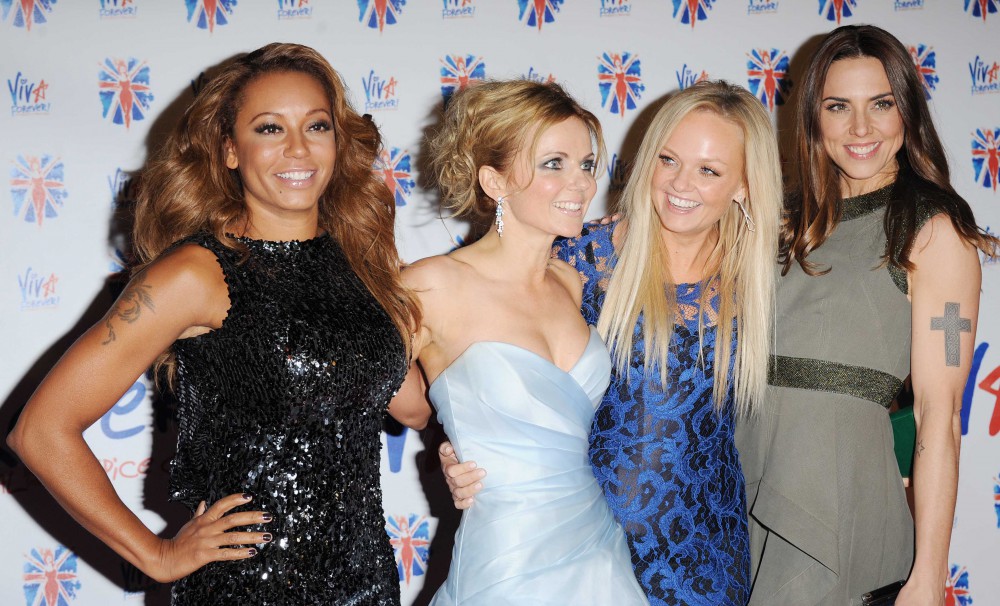 ALERT, ALERT: dig up your crop top and memories of your middle school dance. Four new Spice Girls songs have been unearthed for the first time.

The Spice Girls were the sexy British imports American teenagers were obsessed with before the members of One Direction were even born, famous for their outrageous outfits, songs like “Wannabe” and “Say You’ll Be There,” and spawning the fashion mogul who would become Victoria Beckham (originally Posh Spice, for the record). An unnamed source has leaked four previously unreleased tracks from the group’s final album Forever from 2000.

The tracks only feature four of the five original Spice Girls – Geri Halliwell (Ginger Spice) departed from the group in 1998 and these songs were recorded in 1999 – but Baby Spice (Emma Bunton), Posh Spice (Victoria Beckham née Adams), Scary Spice (Melanie Brown) and Sporty Spice (Melanie Chisholm) still bring most of the signature heat. Originally posted on Soundcloud, the songs have since been removed but not before “A Day In Your Life” and “If It’s Lovin’ On Your Mind” were salvaged by the glorious Internet, and one’s actually a solid single.

DAMN, Girls, why wasn’t this released as a single? This is what girl group jams are made of: a latent “I don’t need no man but I could blow your mind regardless” message, weird pop harpsichord and catchy chorus. There’s even a lyrical reference to a pager number! Perfect.

“A Day in Your Life”

The perfect song to dance with your eighth grade crush to, with the signature harmonies and Victoria, do you still sing sometimes or are you just constantly staring at your own cheekbones? A girl wonders.

The other songs, “Right Back at Ya” (a different version was released on Forever) and “Pain Proof” show some attitude that isn’t tangible in their early work – keep in mind, these songs were recorded just a few months before the group went on a seven-year hiatus that ended for a brief reunion tour in 2007 and an (admittedly incredible) performance at the 2012 London Olympics.

Had they continued, it appears that the Spice Girls were interested in moving away from the teen queen personas and into an empowered ladies ensemble a la En Vogue. Mel B even raps about their early days on “Right Back at Ya”, singing:

We’re coming right back atcha
No R.I.P.
Not forgetting the days
When we were all wannabes

The leaks don’t mean that the Girls are back together, but hey, maybe a little extra attention will light a fire under their zigazig-ahs. In the meantime, does anyone want to watch Spice World on VHS with me?

Enter to win tickets to see Trio Da Kali at The Villa Victoria Center of the Arts (Newton, MA) on April 10th. END_OF_DOCUMENT_TOKEN_TO_BE_REPLACED

END_OF_DOCUMENT_TOKEN_TO_BE_REPLACED

Enter to win tickets to Rhye at The Paradise on February 28th. END_OF_DOCUMENT_TOKEN_TO_BE_REPLACED

Her new album has been pushed back, but we have Kimbra’s new single for you. END_OF_DOCUMENT_TOKEN_TO_BE_REPLACED

The folk duo returns with a new record this week. END_OF_DOCUMENT_TOKEN_TO_BE_REPLACED

Now that we’re done looking back at 2017, let’s look ahead at 2018. END_OF_DOCUMENT_TOKEN_TO_BE_REPLACED

Our first Song of the Week for 2018. END_OF_DOCUMENT_TOKEN_TO_BE_REPLACED

In a year when so many things were off, the music was right on. END_OF_DOCUMENT_TOKEN_TO_BE_REPLACED