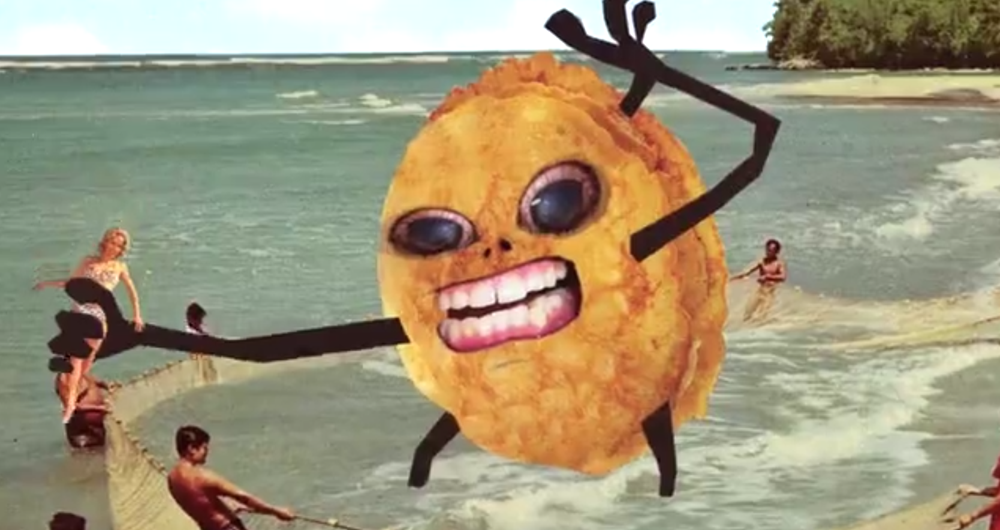 It all started one fateful morning in 2007. Damon Bishop and Cara Kuball wanted to avoid hosting a huge party at their apartment at the risk of destroying their new home. They considered some more civilized option and decided that a housewarming brunch was a safer bet. Little did they know that their new apartment was about to become the birthplace of the International Pancake Film Festival: an event built on the foundation of appreciating pancakes through creative homemade videos that honor these fine, fluffy disks as king of the breakfast table.

On Thursday November 13, at 8:30 p.m. the 2014 IPFFs will debut at the Brattle Theatre in Cambridge. Bishop and Kuball’s epic, pancake-themed gathering was so much fun that their guests returned the following year to repeat the experience. This time, however, they raised the bar and watched some movies featuring pancakes as they ate. Cuball and Bishop recall gathering around the projector, covering the windows, and having a blast with their friends as the original IPFF took place.

Seven years later, the two Somerville residents reflect on the strides the “ever-present pancake foundation” has made over the years. In 2011, they hosted a batch of wintery pancake films for the holiday season and in 2012 they held the first spooktacular Halloween collection of flapjack films. Each event consists of about a dozen DIY style films that are submitted from people in the area.

The upcoming festival is slated to be one of their craftiest events to date due to this year’s theme: Animation and Puppetry.

In addition to the nine, never-before-seen films that will premiere, boy genius Anthony Montuori will share his latest creation with the crowd: a one of a kind pancake-themed video game. Montuori will be playing a few rounds of the game before the submitted films screen.

In preparation for the big night, Bishop and Kuball have been busy “collecting pancake recipes, playing pancake games, inviting artists to create new work in the form of posters and t-shirts just for this year’s festival, and generally doing everything we can to make this event an excellent time for all.”

When asked to describe both the submissions and general tone of this year’s IPFF, Bishop and Kuball gave me five words: Fluffy. Funny. Fulfilling. Sweet. Redonkulous. While they could not release any sneak peaks of the films premiering this Thursday, the following videos, screened in past IPFFs, were offered as an amuse-bouche of what is to come.

This first example of prime IPFF quality, “Look Back in Batter,” has throw-back appeal, featuring still shots of pancake-themed places and people.

The IPFF presents: Look Back In Batter-Intro&Outro from damon bishop on Vimeo.

This second video, “The Pirates of Pancake Island,” features a lego animation of pirates rowing their boats to Pancake Island, where some questionable booty is discovered beneath its fluffy service.

The Pirates of Pancake Island from Shannon Daly on Vimeo.

The last teaser, “The Pancake Killer,” branches out the horror genre, showing the dark side of the traditionally golden brown treat.

Bishop and Kuball recognize the importance of addressing the “humble and floppy” spirit of the pancake. Past participants in the IPFFs have received awards for Excellence in Punctuality, the Attention to Detail Award, an Audience Choice Award, and even a Lifetime Achievement Award. However, as the founders of the event, Bishop and Kuball would prefer to give everyone who takes advantage of the IPFFs, “a fantastic blank canvas for people to work upon,” or a participation prize.

The two did mention that in the future they would be interested in teaming up with some waffle experts in a breakfast food film expansion, but there is only one ever-existing threat that could cast a shadow on the big day. “We live in constant fear that someone will start an oatmeal film festival.” Bishop says. “The thought keeps us up nights. An oatmeal film festival would single-handedly shut us down within 6 months!”

END_OF_DOCUMENT_TOKEN_TO_BE_REPLACED

Enter to win a pair of tickets to attend The Hess Collection Seminar and Dinner as part of Boston Wine Festival 2018 at the Boston Harbor Hotel on Wednesday, March 14th. END_OF_DOCUMENT_TOKEN_TO_BE_REPLACED

I referred to it as the “best kept secret” in Boston arts for the holidays. END_OF_DOCUMENT_TOKEN_TO_BE_REPLACED

Boston’s arts scene shines at this time of year. END_OF_DOCUMENT_TOKEN_TO_BE_REPLACED

It’s so much more than a holiday show. END_OF_DOCUMENT_TOKEN_TO_BE_REPLACED

Rock for a cause this holiday season. END_OF_DOCUMENT_TOKEN_TO_BE_REPLACED

Get out and see a show this holiday season, and save some money when you do. END_OF_DOCUMENT_TOKEN_TO_BE_REPLACED

You can help give the gift of music to kids in need this holiday season. END_OF_DOCUMENT_TOKEN_TO_BE_REPLACED