Without Peyton, Patriots/Colts rivalry ain’t what it used to be 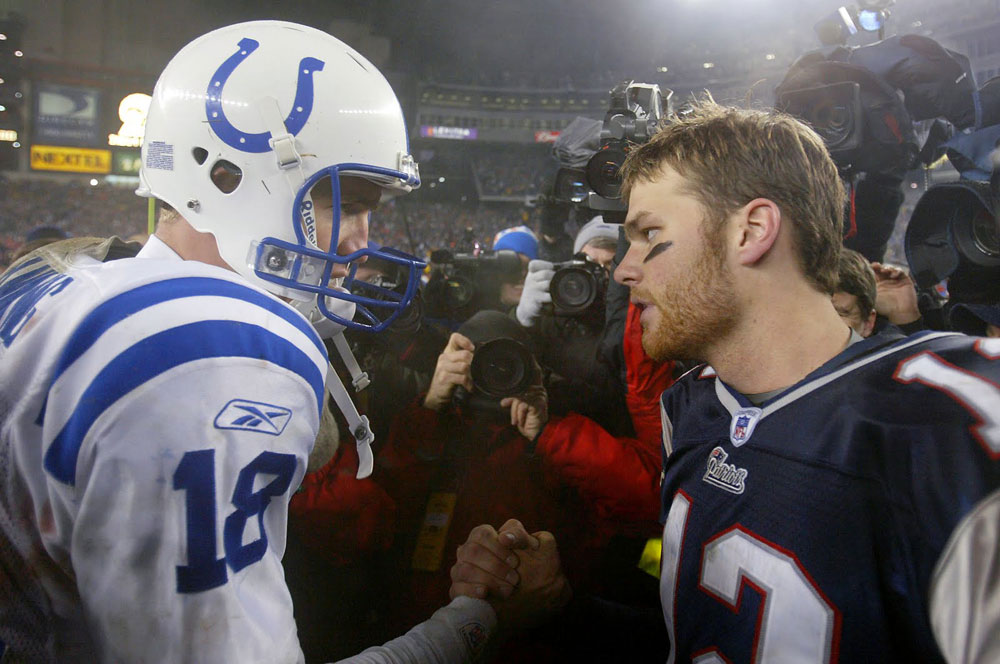 Arguably the New England Patriots’ biggest rival team outside the AFC East is on its way to Foxborough for a postseason showdown at Gillette Stadium on Saturday. But the feud with the Indianapolis Colts just isn’t the same anymore. When Peyton Manning left Indy for Denver, he took the rivalry with the Patriots with him. Can Saturday’s game ignite a different kind of rivalry?

The bad blood between the Colts and Patriots largely started due to an argument that stretched on for more than a decade. Who is the better quarterback, Tom Brady or Manning? The rivalry with Peyton’s Colts was never so much about the teams going head-to-head as it was the franchise players going at it. People were captivated by seeing future Hall of Famers Brady and Manning try to outscore one another. That’s what made their regular season bouts feel like playoff games and their playoff games feel like a bonus Super Bowl.

Watching Andrew Luck and Brady duke it out just doesn’t have the same luster. As much as Luck is a fast-rising young QB, the media doesn’t paint this as a prime gun-slinging contest between near-equal foes. Until Luck establishes himself as a super-duper-star, it’s more of a David and Goliath story. If he manages to knock off an all-time great this weekend, maybe the script changes a bit.

Though the Colts don’t have Peyton, the team does have some leftover players from his era, like Robert Mathis and Reggie Wayne. The veteran receiver won’t be able to suit up due to injury but Mathis and his 19.5 sacks could have an impact on this playoff game. But even with Mathis, Wayne, and other familiar faces, the Patriots/Colts rivalry was never carried by those guys. It was always carried by the QBs. Don’t expect any fights or any extra trash talk when these teams play one another this Saturday. Not even the Colts’ latest signing of former Patriot Deion Branch will create tension between these two teams, since Tom is happy for his buddy.

Unfortunately, even if the Patriots take care of business at home and beat the Colts, New England fans unfortunately won’t be able to throw their hands up and scream “Suck it, Manning!” or relish No. 18’s struggle face. All they will see is the sad look upon a scruffy Luck and head coach Chuck Pagano. Likewise, if New England’s playoff dreams come to a premature end this weekend, Patriots fans are not going to be nearly as pissed off as they would be if the Colts of old sent their team packing early. Having the Pats season end thanks to Luck’s Colts instead of Manning’s Colts would leave a much smaller lump in the throat of fans. Sure, they’d be pissed and we’d be having a different discussion about Luck’s star status, but the Patriots losing to Manning is on with the Red Sox losing to the Yankees or the Celtics losing to the Lakers. That kind of sports hate runs deep.

This weekend’s game should be an entertaining bout between a couple of solid teams. Both Indy and New England are two of the most consistent and successful franchises since the new millennium. But with Manning gone, there’s no reason for Patriots fans to get any more rowdy than usual when Indy’s bus rolls up to Gillette on Saturday. There won’t be any extra tension in the air. This feud has become more about sportsmanship than bad blood.

The Patriots’ rivalry with the Colts isn’t dead without Manning. It’s just close to dead. Maybe this weekend will help give it some new life.

The Black and Gold continue their run tonight at TD Garden. END_OF_DOCUMENT_TOKEN_TO_BE_REPLACED

Who will make the Class of 2018? END_OF_DOCUMENT_TOKEN_TO_BE_REPLACED

It’s been awhile since we talked Black and Gold. END_OF_DOCUMENT_TOKEN_TO_BE_REPLACED

You’re going to wish you were in the Northern Alps. END_OF_DOCUMENT_TOKEN_TO_BE_REPLACED

END_OF_DOCUMENT_TOKEN_TO_BE_REPLACED

Bill might be “on to Tennessee,” but we’re not. END_OF_DOCUMENT_TOKEN_TO_BE_REPLACED