With new album, Riff Raff is the evolutionary white rapper 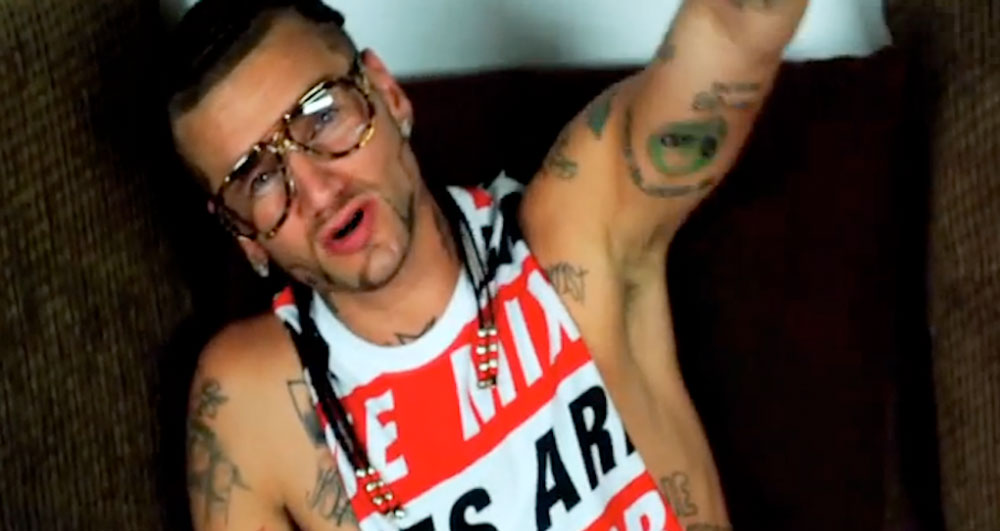 Riff Raff has been an Internet mainstay for at least two years and his artistic credibility has been defended and derided. His Warhol-esque skin, with pop culture references from the BET logo to Slimer the ghost tattooed on his body, Riff Raff has become the poster child for the new age of sardonic Internet-based hip-hop. More than that he is pioneering new ground for white rappers. How exactly does Riff Raff fit in to the history of white rappers? Before hip-hop’s fastest rising and most divisive star releases his most anticipated album, “NEON iCON,” on Jan. 28 on Mad Decent, we take a look.

It’s hard to say who the first white rapper was. Obviously any kid who knew where to find Kool Herc or lived in the South Bronx at the right time can claim the title. But the First White Person to Achieve Fame Outside of Their Neighborhood award goes to Debbie Harry, whose 1981 crossover hit “Rapture” proved the marketability of the new genre.

By the end of the decade, the rap world had seen the success and emergence of artists like the Beastie Boys, 3rd Bass (one of the first interracial rap groups), and the beautiful collaboration between Rick Rubin and Russell Simmons that spawned Def Jam and years of hegemony from the label.

Few white rappers, aside from MC Serch from 3rd Bass, had made a credible name for themselves without the help of a group or team. In 1990, it all changed. A young b-boy from Texas who had been opening for EPMD, Stetsasonic, and MC Hammer released the fastest selling rap record in history and forever altered the role of the white rapper. Vanilla Ice’s career is a cautionary tale for aspiring white rappers — his failure is as amazing as his success. Regardless of your opinion on his artistic integrity, Vanilla Ice remains the first solo white rapper. In an interview with Rolling Stone, Riff Raff revealed his love of Vanilla Ice because of his outlandish personality and positivity.

Perhaps influenced out of a desire to ensure the place of white rappers in a post-Vanilla Ice world, the ’90s produced white rappers determined to carve credibility outside of hammer pants and shaved eyebrows. The decade was the start of white rappers coming to terms with their race and their desire to participate in a black art form. The ’90s saw the rise of RA the Rugged Man, El-P and Company Flow, Celph Titled, High and Mighty, Evidence and Dilated Peoples, Miilkbone, and of course, Eminem.

Little needs to be said for Eminem’s contribution to rap music and how he redefined the role of white rappers in hip-hop. What he did was completely change the scene; by embracing his race and challenging any other rappers to battle him if they think they could do it better.

Since the birth of Slim Shady, numerous white rappers have come and gone. As a result of technology and the shrinking of the rap world, there are hundreds of white rappers: Mac Miller, Action Bronson, MGK, Yelawolf, Cam Meekins, and Riff Raff.

Riff Raff fits into the history of white rappers as the walking embodiment of hip-hop’s Internet age.

His style is rooted in the lean-influenced Houston swang of OG Ron C and Swishahouse. His non-sequitur rhymes about Versace, cars, codeine, and Regis Philbin are an extreme version of rhymes heard across any screwtape. While his tattoos, braids, and rhymes may seem like a gross distortion and minstrel show to onlookers, Riff Raff is merely a product of his environment. For any rapper, white or not, his environment is his most basic inspiration. Riff Raff’s environment is twofold: Houston and the Internet.

In the age defined by the Soulja Boys, Odd Futures, and Mac Millers, rappers rise to fame by producing buzz around there entire aesthetic. Beyond just the music rappers must have dozens of videos, free mixtapes, and a brand. Rappers, like Coke or Apple, brand themselves until consumers have a personal connection and buy them not for the music but for the idea.

Riff Raff has mastered personal branding. His body is literally branded by corporations.

Since he first appeared on MTV’s “The White Rapper Show” in 2009, his entire career has been based around a larger-than-life persona. His success builds on itself as people debate whether or not he is serious, whether or not he is a genius, and whether or not his music is even worth listening to. No matter the opinion, Riff Raff has perfectly mixed a distorted southern style with a hedonistic, sardonic detachment.

Blondie opened hip-hop up to white rappers. 3rd Bass and the Beastie Boys gave them credibility. Vanilla Ice took it away. White rappers of the ’90s worked to regain it. Eminem ensured success. Now, Riff Raff is pioneering the Internet age for white rappers and opening new neon doors.

Enter to win tickets to see Trio Da Kali at The Villa Victoria Center of the Arts (Newton, MA) on April 10th. END_OF_DOCUMENT_TOKEN_TO_BE_REPLACED

END_OF_DOCUMENT_TOKEN_TO_BE_REPLACED

Enter to win tickets to Rhye at The Paradise on February 28th. END_OF_DOCUMENT_TOKEN_TO_BE_REPLACED

Her new album has been pushed back, but we have Kimbra’s new single for you. END_OF_DOCUMENT_TOKEN_TO_BE_REPLACED

The folk duo returns with a new record this week. END_OF_DOCUMENT_TOKEN_TO_BE_REPLACED

Now that we’re done looking back at 2017, let’s look ahead at 2018. END_OF_DOCUMENT_TOKEN_TO_BE_REPLACED

Our first Song of the Week for 2018. END_OF_DOCUMENT_TOKEN_TO_BE_REPLACED

In a year when so many things were off, the music was right on. END_OF_DOCUMENT_TOKEN_TO_BE_REPLACED