Will This Man’s Beard Secure the Pats Win? 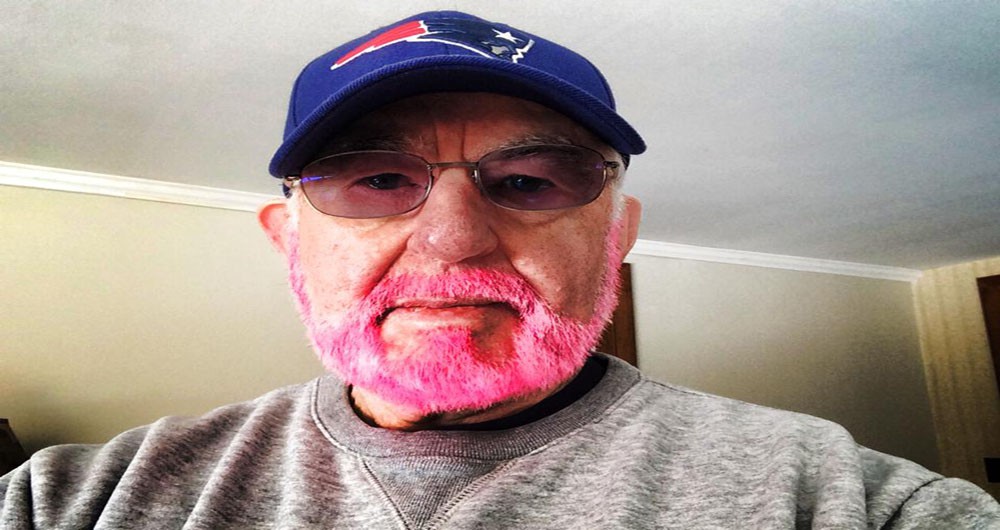 Fred Delfino, 77, is a regular guy from North Attleboro who works security at Gillette Stadium…but does he have the key to the Patriots Super Bowl win? Statistics and superstition say yes.

Delfino posted a photograph of himself online sporting a bright pink beard, a tradition he’s performed for twelve Patriots home games to big approval from fans, and with a 12-0 record just may have the key to this year’s win. We caught up with the local hero before the game, florescent beard and all.

How long have you worked at Gillette Stadium?Since June. 8 months.When was the first time you dyed your beard pink? How did fans react?The story goes I was sitting there minding my own business in the beginning of October and all the girls at the stadium were dying their hair pink. They asked me if I wanted to dye my beard pink and I said, “get the hell out of here”. They said it was for Breast Cancer awareness month, so I said ok. I dyed my hair every game that month. They won every game. How did fans react when you stopped dying your beard pink?The first game in November I didn’t dye my beard. A few fans said if they lost the game it would be my fault. At half time, I colored my beard and they won. For the game against Buffalo, everyone agreed it was okay not to have a pink beard since the game wasn’t important. They lost. So far they’re 12-0 with the pink beard.How long does the pink dye stay in?That stuff washes right out. When I come home it takes me ten minutes to wash it out.Do you think the pink beard will work even though the Pats aren’t at home?Absolutely. My co-workers made sure my beard’s pink even though I’m watching from home.Any favorite moments from working at Gillette?One day everyone was in line to high-five the guy with the pink beard. A woman walked up and said “I don’t want a high five”. I said “what do you want?” She said, “I want a chest bump.” She took a running start and chest bumped me. My boss thought she was attacking me. Any game predictions for tonight? Who’s gonna win, and by how much?I got the Patriots to win by two touchdowns. Let’s say 35-21?I need to know your thoughts on Katy Perry.Katy Perry? Well, I love her. She’s a good entertainer. She’ll do a good job at halftime.How did Delfino get started working at the stadium and discovering his magical powers?

“Working at the stadium is fun. My granddaughter works there, too. It’s a good time. That’s what life is all about,” he said.

Enter to win a pair of tickets to attend The Hess Collection Seminar and Dinner as part of Boston Wine Festival 2018 at the Boston Harbor Hotel on Wednesday, March 14th. END_OF_DOCUMENT_TOKEN_TO_BE_REPLACED

The Black and Gold continue their run tonight at TD Garden. END_OF_DOCUMENT_TOKEN_TO_BE_REPLACED

Who will make the Class of 2018? END_OF_DOCUMENT_TOKEN_TO_BE_REPLACED

It’s been awhile since we talked Black and Gold. END_OF_DOCUMENT_TOKEN_TO_BE_REPLACED

You’re going to wish you were in the Northern Alps. END_OF_DOCUMENT_TOKEN_TO_BE_REPLACED