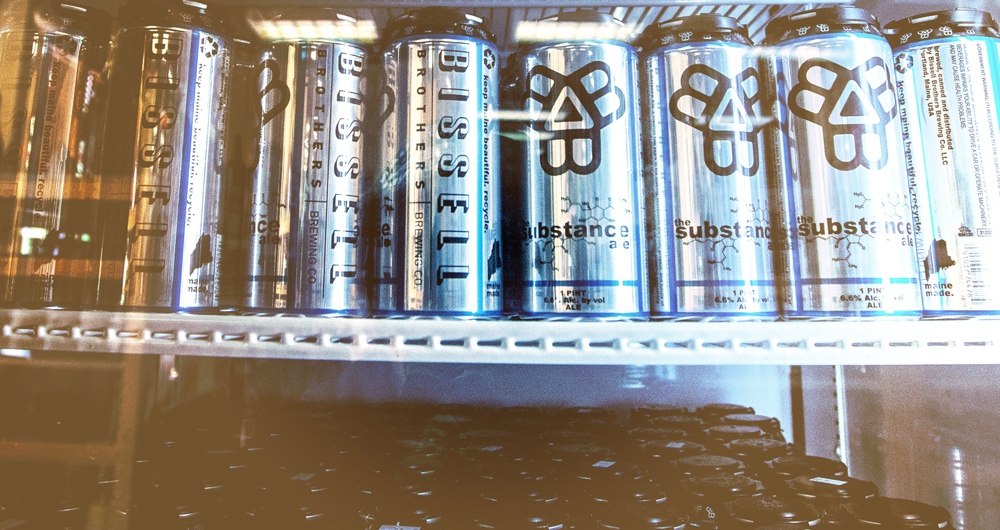 Local fans of Heady Topper, the infinitesimally popular double IPA by Vermont’s Alchemist Brewery were making three hour-long cannonball run drives to the Green Mountain state to stock up long before BeerAdvocate.com branded it the best beer in the world.

Chances are it won’t be long until beer fans here start embracing another New England craft brewery, Maine’s Bissell Brothers, in a similar fashion.  By taking a (much shorter) drive to Portland this weekend, hop heads can secure cans of the brewery’s first beer, an aromatic India pale ale known as The Substance.

The brewery’s second batch of the beer was canned earlier this week and is slated for release on Saturday. If you can find it that is.

One of Portland’s premier craft bottle shops, Bier Cellar, located on Forest Ave, sold over 400 four packs, about 70 cases, of the beer over just the course of just three days last month. When it whipped through 40 cases the first day it was available, February 26, The Substance set a single-day, single-beer sales record, and single-day, single-beer case record, simultaneously for the store.

Before the boys knew it there was none left. Over 1,000 four packs, 175 cases in total, of The Substance were gone in less than a week; it was a bona fide hit.

The eldest brother, co-founder and business director Peter Bissell, 30, discussed the brewery and its future with me earlier this month, and claims that keeping up with demand was never something they expected to contend with.

“I am not being smug … but months ago, we were scheming ways to move the cans once we had them, like it was going to be a problem,” Bissell said, “It was just a genuine shock to watch such quantities of our beer move so fast.”

That’s where the Pine Tree State’s thirsty patrons came in.

It only took a few days but Mainers depleted the shelves at Bier Cellar, along with those at the Ohno Cafe, RSVP Discount Beverage, Maine Brewing Supply and Downeast Beverage in Portland. Outside of the city, eager drinkers looking to get their hop fix raided The Vault in Lewiston and Ron’s Market in Farmington.

While the beer is delightfully crushable – it goes down exceptionally easy for 6.5 percent ABV – being able to pull off a hell of a marketing campaign didn’t hurt sales either.

For months, the brewery was shrouded in mystery. Shortly after they took up residence in Maine Beer Company’s old digs on Industrial Way around this time last year, the Bissells covered the windows with neon yellow posters. Each one had the brewery’s logo – three Bs coming together to form a nuclear symbol of sorts – with words below it: “ALPHA ACIDS AT WORK.” Alpha acids, of course, being the class of chemical compounds needed to produce beer. Soon the logo was popping up all over town: Bars, cafes, coffee shops, even other breweries.

While The Substance may come in shiny, silver tall boy cans like Heady Topper, it’s lazy to compare it to the Vermont juggernaut on a physical level. While the beer is certainly flying off shelves at the clip that Heady did during its early days, at least from a beer standpoint, they’re completely different beasts.

Brewmaster Noah Bissell, 23, first crafted The Substance during his waning days at the University of Maine Farmington. Even in its infancy, The Substance was expected to be the brewery’s flagship, an extremely quaffable, hoppy American IPA.

And is it ever drinkable. Notes of citrus and pine, hints of Summit and Falconer’s Flight hops, dominated the nostrils when I had my first pint late last month at Portland’s The Thirsty Pig.

Bissell likens the Pig, a bar/sausage shop on Exchange Street in the bustling Old Port, as the brewery’s Fenway. There was even a point in January, when it first went on draught, where it was responsible for slinging about 75 pints of the beer a day.

“We built the brewery, figuratively and literally, from behind the bar at the Pig. It taught us invaluable lessons about how people actually decide on beer at a point-of-sale level.”

Now, it’s just one of the many places you can find the beer across Maine.

On a recent trip to Portland, it was hard to find a gastropub or a bar in Portland that didn’t have Noah and Peter’s suds on tap. Wandering from The Thirsty Pig, to the buzzy new Central Provisions to the West End hotspot LFK, the Substance was a presence at each stop. When it couldn’t be found, it was because the keg had already kicked and the establishment was waiting on more.

That same weekend, one of, if not the best beer bar in town, Novare Res Bier Café had two kegs of Heartstrings, a red ale Bissell Brothers brewed with El Dorado, Centennial, and Meridian hops, finished with Lublin and Marynka hops for a Valentine’s Day chocolate pairing. The kegs, like Substance has in many places, lasted all of one night, barely, before they kicked.

Bissell wouldn’t disclose exactly how many accounts they ship the beer, which they’ve affectionately begun referring to as ‘woofer,’ to but insists its way more than the figure I initially surmised.

“Some of our top-selling bars are places no one has ever heard of,” Bissell says.

Chances are if you spot the brewery’s bright neon green delivery van, or their Substance kegs, which are just as distinct – a neon green ring adorned with a spray-painted ‘BBB’ logo – you’ll be able to find the beer nearby.

“The Van was a crucial part of the business plan from the very beginning. We wanted to make it stand out and we succeeded,” Bissell said, “People will come up to us while we’re taking logs into places and go ‘I just wanted to say I love your beer!’”

While The Substance was briefly on tap at Cambridge’s Lord Hobo and three New York City bars a few weeks back, it’s not something Boston (or NY) craft beer drinkers should expect to happen again with any frequency. There are no plans in the works to distribute outside of Maine and the Bissells prefer it that way.

“If you gave Noah and I the choice of a million dollars for putting beer in as many markets as possible or being a leader in beer innovation in Maine, we would choose the latter. Some things are more important than money or wonton expansion,” Bissell said.

Still though, the brewery, which happens to be located next door to two other new brewery upstarts, Foundation Brewing and Austin Street Brewery, and down the street from the venerable Allagash Brewery, plans on ramping up production as much as they can for the foreseeable future.

For now, the tentative plan is to continue to do double brew days in their 10 barrel brewhouse to fill two 20-barrel fermenters (and a brite tank). That should max them out at 60 barrels of capacity per batch until they receive their third fermenter, slated for delivery at the end of May, or the start of June.

Bissell Brothers plans to alternate between kegs and cans each batch, which would put a 20 barrel batch in cans – distributed through their brewery and the aforementioned shops – every three weeks or so.

Once the summer gets rolling, Bissell says Portlanders can expect to see 20 barrel batches of draft-only specials on tap at local Portland establishments while the brothers try to keep up with Substance demand.

“We never set out to just make one beer,” Bissell says.

“The demand for The Substance took us by surprise, and while we’re happy to focus on making just that for the time being, Noah is bursting with ideas.”

Enter to win a pair of tickets to attend The Hess Collection Seminar and Dinner as part of Boston Wine Festival 2018 at the Boston Harbor Hotel on Wednesday, March 14th. END_OF_DOCUMENT_TOKEN_TO_BE_REPLACED

This year, the festival is welcoming more female wine producers than ever before, making up 20% of all winemakers that will be at the festival. END_OF_DOCUMENT_TOKEN_TO_BE_REPLACED

The holidays are here, so raise a glass. END_OF_DOCUMENT_TOKEN_TO_BE_REPLACED

‘Tis the season to mix a nice, stiff drink. END_OF_DOCUMENT_TOKEN_TO_BE_REPLACED

Warm up with Tito’s on your sweater and Tito’s in your glass. END_OF_DOCUMENT_TOKEN_TO_BE_REPLACED

There’s a ton going on at Idle Hands in Malden this spring. Dan McDonnell and Josh Deering joined me in studio to talk about Maifest, what’s new in the Taproom, and their collaboration with The Black Ale Project. Oh, and don’t miss Idle Hands at BeerAdvocate’s Microbrew Invitational next month! END_OF_DOCUMENT_TOKEN_TO_BE_REPLACED

Giovanna Guzman is the marketing coordinator at Kings Bowl, who you can visit in the Back Bay, Burlington, Lynnfield, Dedham, and soon in the Seaport. We talked beverages, naturally, seeing as it’s Thirsty Thursday. And we sampled sangria. And it was soooo good. END_OF_DOCUMENT_TOKEN_TO_BE_REPLACED

These five words might change your life: Farmer Willie’s Alcoholic Ginger Beer. Co-founders Nico Enriquez and Max Easton were in studio with me this morning. Nine-packs and kegs of Ginger Session coming next week! END_OF_DOCUMENT_TOKEN_TO_BE_REPLACED

Chef Avi Shemtov–he of the Chubby Chickpea and Single Guy Cookbook–was back in for a visit this morning to talk about his latest venture. TAPPED is a mobile beer catering company that specializes in on-site draft pours of both craft beers and mainstream brands. Thirsty yet? END_OF_DOCUMENT_TOKEN_TO_BE_REPLACED