UPDATE: The Man Who Shoveled the Marathon Finish Line Has Been Found

Boston spent all of yesterday shoveling their way out of one of the largest winter storms in its history, with many getting just enough snow out of the way to move their cars. But one local hero went above and beyond, taking the time to carefully clear off the Boston Marathon finish line.

UPDATE (2:00 PM) — We have a winner! Back Bay Social Club, a restaurant right next to the marathon finish line, reached out claiming the shoveler was Chris Laudani, a bartender who was working at the restaurant yesterday.

@BostonDotCom The marathon finish line shovler was Christopher Laudani! He borrowed our shovel to do it!

According to Back Bay Social Club manager Ryan Swann, Laudani asked to borrow a shovel because things were a bit slow.

“I asked him why he needed the shovel, and he said ‘I’m going to go clear off the Marathon finish line if that’s ok with you,” Swann says. “He’s run the marathon the last few years, so I told him to go for it. And now his photo is everywhere.”

In a comment to Boston Magazine, Laudani said he loves the Marathon, and didn’t like the word ‘hero’ being thrown around to describe him.

I only did it to send a message…I love the Boston Marathon and everything it stands for, the finish line doesn’t deserve to be covered in snow.” He then added, “I think it’s cool that so many people feel the same way, but I saw the word ‘hero’ being tossed around and that I don’t like. I’m no hero, I’m just a nut who loves the marathon. The real heroes are the people who were out there clearing the streets and sidewalks, the [Boston Police Department], and the [Boston Fire Department] who risk their lives every day to keep people safe.”

We have reached out to Laudani for comment, and will update if we hear more.

The photo was taken by Twitter user @PhillyIdol1017, aka Phillip Hillman, from a window at the Charlesmark hotel.

Powerful photo, taken by my friend @PhillyIdol1017 – let’s find the guy in the photo! #whoshoveledthefinishline pic.twitter.com/HO9WrxeHnI

Hillman and his friends have started a Twitter hashtag, #WhoShoveledTheFinishLine, hoping to find the identity of the man.

One of the early guesses was an employee of the hotel, but according to an editor at Mashable who called, the hotel had nothing to do with it.

#WhoShoveledTheFinishLine: I’ve got calls in with Boston’s mayor’s office, @bplboston & the @bostonmarathon to find out whodunnit. — Brian Ries (@moneyries) January 28, 2015

Whoever that mysterious man is, we salute you. 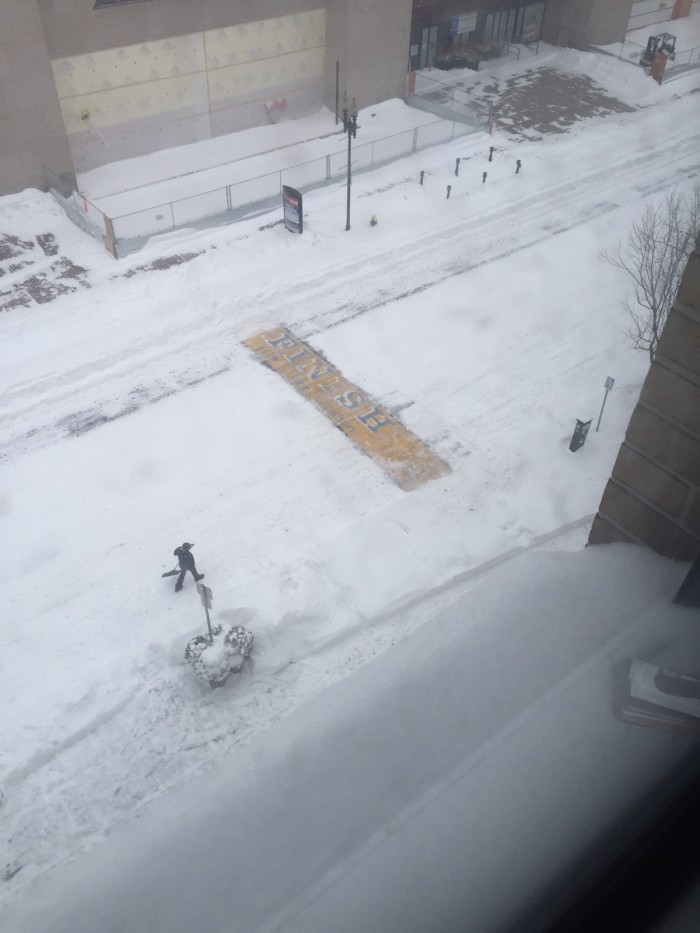 UPDATE (12:30 PM) — We have several leads on possible shovelers, leading us to believe the ‘local hero’ may in fact be several ‘local heroes.’

The first photo comes from John Campbell, who submitted this photo to the Boston.com Blizzard 2015 Instagram contest.

Shoveled off the finish line. April 18th is around the corner. #Bosnowcontest.

In a comment to Mashable, Campbell confirmed that he was not the shoveler, but arrived soon after.

@JessieHeasman sorry, I came upon the scene just after the shovel hero finished. I just took photos.

The next is from Monkmpls, who looks similar to the man in Hillman’s photo, though it’s too far away to tell for sure.

And finally we have a photo from Kelsey Karkos of a different man shoveling the walk posted two hours earlier.

This guy was so nice to shovel off the #bostonmarathon finish line today to remind us why we go out there and run #everyday even in the blizzard! #bostonstrong #boston

Even the Boston Police want to know who he is.

Given how busy Boylston Street is, it’s very possible that there’s a whole brigade of shovelers who kept the Marathon finish line clean throughout the day.

Enter to win a pair of tickets to attend The Hess Collection Seminar and Dinner as part of Boston Wine Festival 2018 at the Boston Harbor Hotel on Wednesday, March 14th. END_OF_DOCUMENT_TOKEN_TO_BE_REPLACED

We ate vegan blueberry cake and it was amazing. END_OF_DOCUMENT_TOKEN_TO_BE_REPLACED

Dan Croll is a great musician and an even better person. END_OF_DOCUMENT_TOKEN_TO_BE_REPLACED

We kicked off the weekend with a visit from Sasha Purpura, Executive Director of Food For Free. Sasha was back to promote next month’s Craft for a Cause event, a craft beer festival celebrating the Central Square Cultural District. END_OF_DOCUMENT_TOKEN_TO_BE_REPLACED

Summer is the hungriest time of the year. Millions of kids rely on school meals, but in summer, the meals disappear. HGTV’s Taniya Nayak was in studio this morning to talk about Taste of the Nation this coming Tuesday, June 6, which benefits Share Our Strength’s #NoKidHungry initiative. Click here to get your tickets. END_OF_DOCUMENT_TOKEN_TO_BE_REPLACED

Community Servings provides nutritious meals to individuals and families living with a variety of illnesses. Stephanie Carrigg was in studio this morning to talk about this year’s Meals4Moms program, where your contribution not only helps feed moms in need, but nets you some great goodies for a mom in your life. END_OF_DOCUMENT_TOKEN_TO_BE_REPLACED

Continuing our month-long series spotlighting videos we hope will inspire you think. END_OF_DOCUMENT_TOKEN_TO_BE_REPLACED

The first in a month-long series focusing on new songs that go a little deeper. END_OF_DOCUMENT_TOKEN_TO_BE_REPLACED