What It’s Like Owning the Most Famous Dog in Boston 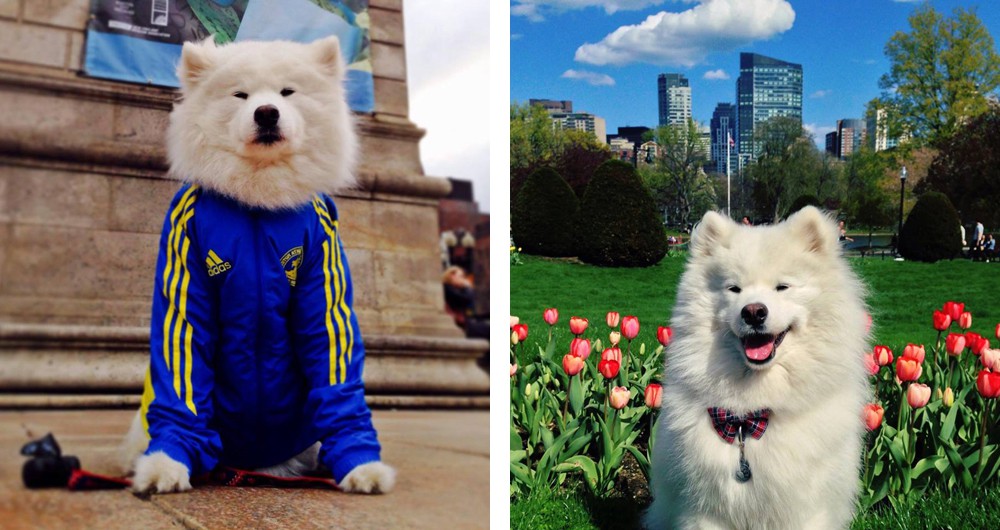 Grumpy Cat memed her way into her own Christmas movie. New York City’s Marnie the Dog regularly receives invitations from celebrities. Here in Boston, an 11-year-old Samoyed and his owner can’t walk the streets of Back Bay without being stopped by onlookers for petting and pictures. His full title is Champion Skilo Bear’s Ivy League C.G.C. Samoyed Sir Harvard, but owner Dana Sullivan calls him Harvard Dangerfield for short.

Like any other pet with a presence on social media, Harvard boasts a huge following – his Instagram account currently entertains around 11,000 people. So whenever Sullivan, a medical researcher and singer with the Tanglewood Festival Chorus, posts new content, the account instantaneously garners hundreds of likes and comments. 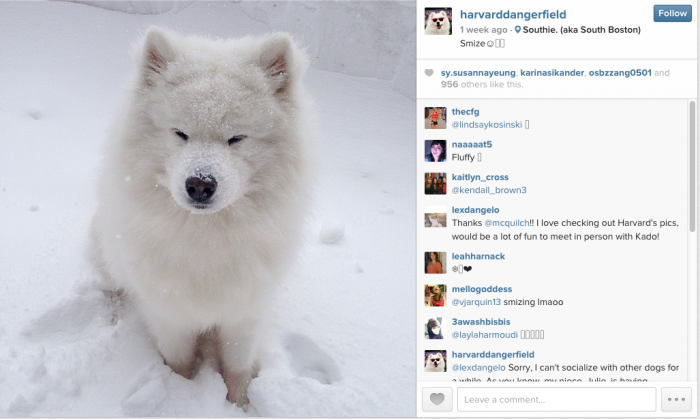 However, Harvard’s Boston-based Internet celebrity features a trait many of his four-legged contemporaries do not possess. When he was six months old, Sullivan began training the young Samoyed to become a certified therapy dog. 11 years later, the duo regularly visits area hospitals and nursing homes, letting patients young and old pet the adorable white fluff ball.

“The breed’s temperament is made for being a therapy dog,” Sullivan tells BDCwire. “Plus, he’s just the cutest thing. You have to share him.”

“I don’t even know how my mom got into it, but I always remember her doing it.”

This instilled a strong attachment between Sullivan and the breed. So when she decided to get her own dog 11 years ago, she inquired with breeders about Samoyed litters. During one particular visit, a male pup wouldn’t stop following her around. He ended up following her home. 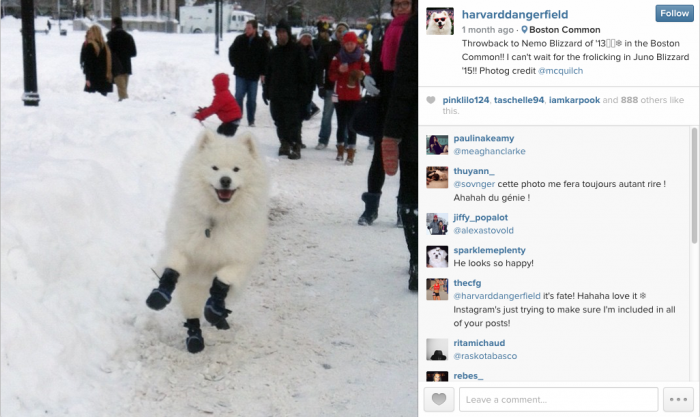 From the get go, people couldn’t stop stopping Sullivan and Harvard on their daily walks in the city. “Oh my gosh, can I pet your dog? Can I take a picture?” Family, friends, strangers – everyone wanted to say hello to Harvard and give him a few good scratches behind the ears. They were happy to oblige, and soon after social media was replete with the Samoyed’s likeness.

“They tell their friends, and their friends tell their friends,” explains Sullivan. “I’ve actually talked with people who’ve started following him online because people they knew were following him. Next thing you know, a friend who had no idea Harvard was mine said, ‘Oh my gosh, your dog is Harvard Dangerfield? I follow him on Instagram. All my friends are obsessed with him!’”

Hence the phrase “going viral.” Harvard’s Instagram spread throughout Boston and other parts unknown after Sullivan created the account. As a result, Sullivan felt obligated to post as often as possible. Still, certain difficulties never waned: “Taking a picture of a dog – you have to take 20 just to get a shot where he’s actually looking.” 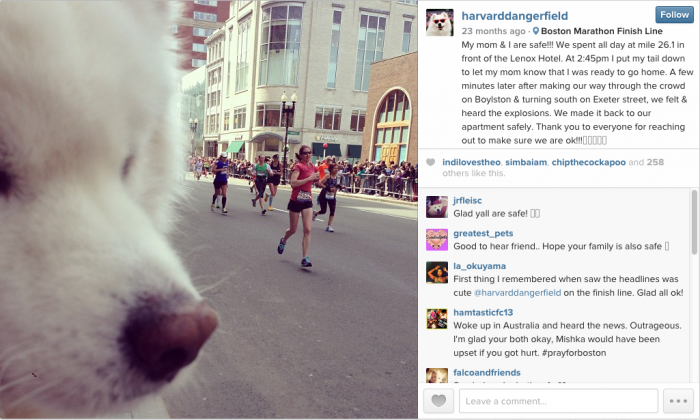 On Monday, April 15, two explosions went off at the finish line of the 117th Boston Marathon. Minutes prior, Sullivan and Harvard were cheering runners in front of the Lenox Hotel.

The news caused many of Harvard’s Instagram followers to panic, but Sullivan assuaged their concerns with a photo and a brief note.

The next day, a Reddit user announced she and her two pugs would be in the Common on Wednesday for free dog cuddles. Boston Redditors quickly latched onto the idea, including a friend of Sullivan and Harvard. “My friend sent it along, and I thought, ‘Well obviously we have to go.’” With that, the pair made their way to the Common.

So did local and national news outlets, whose attention to the impromptu therapy session plastered Harvard’s name and photo all over the Internet. When a Redditor posted a link to a photo of Harvard and described him as a “Ridiculously photogenic dog,” another commented, “That’s Harvard Dangerfield” and provided a link to Instagram. 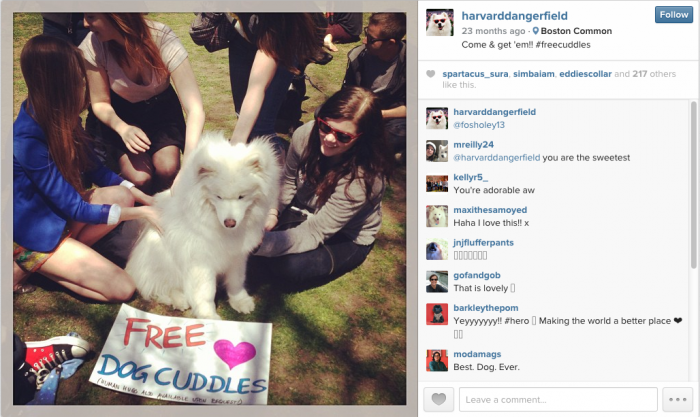 Sure enough, Harvard’s following increased dramatically after that Wednesday afternoon. And with each successive photo, video, and batch of new followers, the positive messages affirming Harvard’s status as a celebrity therapy dog came pouring in.

“He received some really nice messages from people in other states and countries,” says Sullivan. “They said things like, ‘I just wanted you to know he’s still providing therapy all the way over here.’”

Nowadays work prevents the two from volunteering much of the time, but Sullivan suggests Instagram helps fill in: “It gets so busy, it’s hard for us to get out there and volunteer as much as we would like. Having an Instagram is another way to do that.”

Seeing an image of a dog like Harvard on your smart phone, tablet, or monitor isn’t quite the same as petting the fluffy Samoyed in person, but it still triggers the same chemicals in your brain. Dopamine can be just as powerful in person or via distance. Otherwise, how could the /r/aww subreddit be so popular?

Enter to win a pair of tickets to attend The Hess Collection Seminar and Dinner as part of Boston Wine Festival 2018 at the Boston Harbor Hotel on Wednesday, March 14th. END_OF_DOCUMENT_TOKEN_TO_BE_REPLACED

Lee Domaszowec from the Petco Foundation and Rebecca Baylies, Director of Development and Communications at Cape Ann Animal Aid, joined me to talk about Unleashed by Petco’s upcoming series of adoption events. They’ll be held at Brattle Square, Boston Common, and several adoption shelters throughout Massachusetts. Listen to get all the details! END_OF_DOCUMENT_TOKEN_TO_BE_REPLACED

Boston band Funeral Advantage is Tyler Kershaw. And Tyler Kershaw had a fun childhood, so it seems. END_OF_DOCUMENT_TOKEN_TO_BE_REPLACED

Perry put me on to daephne and the album blew my mind. END_OF_DOCUMENT_TOKEN_TO_BE_REPLACED