What Do Boston’s ‘Comics Come Home’ Comics Do When They Come Home? 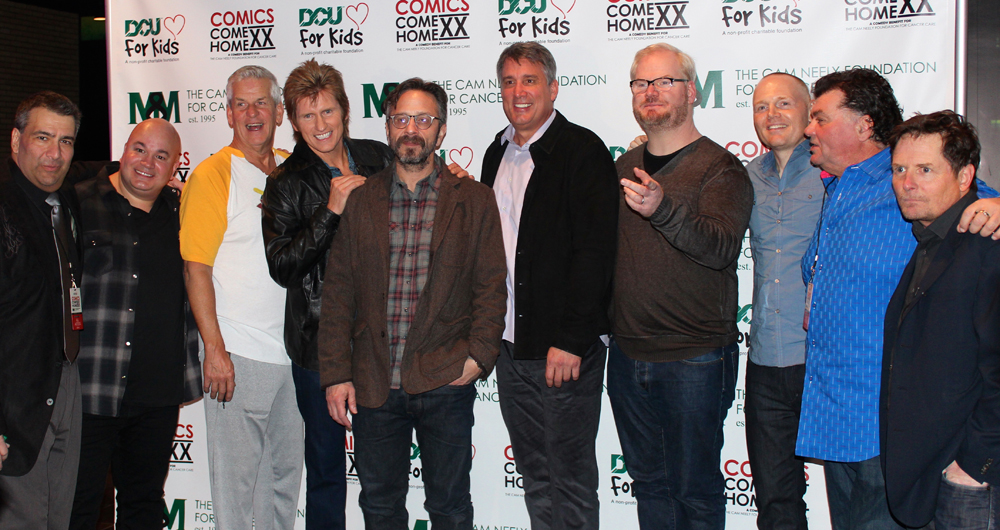 12,000 fans packed the Garden this Saturday night for an evening of laughter and fundraising. Denis Leary lead a motley crew of 9 other comedians in the 20th iteration of Comics Come Home. The event has grown throughout the years starting The Orpheum Theater, and moving to the Agganis Arena. This year the show was held at the home of the Celts and Bruins, its biggest venue yet.

Most of the comics got the crowd to roar in ways that are only heard after an overtime goal, and as always, the proceeds went to The Cam Neely Foundation For Cancer Care. Neely addressed the crowd before the festivities began, thanking everyone for their support. But the night’s grand finale got the best reaction, when the entire Bruins team took the stage with the stand-ups to show support for the President of the organization.

Most comics mused about everyday topics, while some touched upon Boston-specific themes, from hatred of the Tsarnaev brothers to all things local sports. Some of the comics had a special connection to the benefit. Joe Yannetty, for example, had just found out that his aggressive throat cancer was in remission. Yannetty turned the battle of his life into one of the funniest sets of the night. The versatile Jimmy Fallon took the stage to insult, joke and sing with Denis Leary. Before Fallon’s good natured fun, he talked about what great care his father received at The Neely House.

After twenty strong years, the event has become a classic in the City Of Boston. Since most of the comics are from or have lived in Boston, we asked a few what they like to do when they come home. This is what they said:

Lenny Clarke has been a staple in the Boston comedy scene since the ’80s. He appeared in “Rescue Me” with Comics Come Home host Denis Leary. He also had a cameo alongside comic Jimmy Fallon in the now-classic “Fever Pitch.” Lenny lives in Boston, so he had to think of this from a different angle. “Oh my God, my favorite place is the No Name fish restaurant over at the pier. I’ve been going there since I was kid, and it’s still great. Jimmy, the manager, he’s fantastic. It’s one of my favorite joints and when people come from out of town, I take ’em there. Fresh fish fast!”

Jim Gaffigan is a comedian, author, and food lover whose highly anticipated new book “Food: A Love Story,” is out now. Jim is not from Boston, however he did film his new comedy special, “Obsessed,” at the Wilbur Theater this January. Jim kept his answer short and sweet (no pun intended). He loves visiting Mike’s Pastry when in town… sorry Modern.

Marc Maron is a man filled with anger, hilarious observations and coffee. His biweekly podcast, WTF with Marc Maron, is the number one podcast in the country, and for good reason. The 3rd season of his sitcom, “Maron,” will be on IFC in 2015. Maron lived in Boston for a decade after graduating from BU. He remembers those days fondly, saying, “I was in Somerville when they built Redbones, so I will head there for some ribs. I usually need some Dunkin Donuts Coffee when in Boston. I used to go Kenmore Square, but a lot of the places I went are now gone. I used to go this place called the Deli King, but that’s now closed.”

Bill Burr is a “Comedian’s Comedian” from Canton. He now tours, bringing taboo humor to large rooms across the country. He publishes a weekly Monday Morning Podcast on iTunes, and his new special “I’m Sorry You Feel That Way” is out on Netflix now. Burr originally didn’t want to tell us where he went. Burr told us he didn’t want to be the guy who spoiled the local spot, “like they do on ‘Anthony Bourdain.’” Eventually, we got him to crack. He told us, “I go to Town Spa Pizza in Stoughton. A lot of places I used to go to are now closed. Dominic’s by Nicks used to have giant slices of pizza but they aren’t there anymore. I live in LA now so the pizza sucks. I usually get pizza, but, believe it or not, I get Chinese food, too. Like a poo-poo plater or something.”

Although the comics love supporting their favorite joints, they all came home to support the Cam Neely Foundation. You can too by seeing the show next year, or by donating here.

Enter to win a pair of tickets to attend The Hess Collection Seminar and Dinner as part of Boston Wine Festival 2018 at the Boston Harbor Hotel on Wednesday, March 14th. END_OF_DOCUMENT_TOKEN_TO_BE_REPLACED

Comedian Myq Kaplan is a comedian named Myq Kaplan. He joined me in studio this afternoon, and he’s at Laugh Boston this weekend. Click here for tickets. END_OF_DOCUMENT_TOKEN_TO_BE_REPLACED

My goodness, I love Sue Costello. It was great having her back in studio today to talk about her one-woman show, #IAmSueCostello, playing tonight at the Revere Hotel. Click here for tickets. END_OF_DOCUMENT_TOKEN_TO_BE_REPLACED

Trump Takes On…Boston! is running now through election night at Laugh Boston. David Carl was back in studio this afternoon to talk about bringing Donald Trump to the stage, the cathartic element (for both him and the audience) and how audiences have been reacting so far. END_OF_DOCUMENT_TOKEN_TO_BE_REPLACED

Trump Takes On…Boston! has arrived at Laugh Boston. I had comedian David Carl, who is portraying Trump, in studio this morning to talk about the show. END_OF_DOCUMENT_TOKEN_TO_BE_REPLACED

Lachlan Patterson made me laugh this morning. Let him make you laugh this weekend at Laugh Boston. Click here for tickets, and click “more” to hear our conversation. END_OF_DOCUMENT_TOKEN_TO_BE_REPLACED

It was great to have Alonzo Bodden back in the RadioBDC studio this morning. Don’t miss him at Laugh Boston this weekend! Click here for tickets and info, then click through to hear my interview. END_OF_DOCUMENT_TOKEN_TO_BE_REPLACED

You know him from Bar Rescue, so see him at Laugh Boston this weekend. Comedian Owen Benjamin was in studio this morning with his dog Ben. Catch him Friday night at 7:30 or Saturday night at 7:30 and 10. Click here for tickets, then click through for our chat. END_OF_DOCUMENT_TOKEN_TO_BE_REPLACED