When trolls accused this woman of faking her major weight loss, she fought back

This is Simone Anderson of New Zealand. Over the last year, she has been chronicling her weight loss on her Facebook page, Simone’s Journey to Health, and on Instagram.

Through a combination of exercise, diet, and weight-loss surgery, Anderson has lost nearly 189 pounds.

“I am officially half the person I was 11 months ago!” she wrote on Instagram two weeks ago, sharing her message with the photo below. “From 169 kg to 83.85 kg, I can’t even begin to explain in words what this accomplishment feels like.”

While most of her followers responded positively, others reportedly claimed Anderson was faking, pointing out that her phone was in front of her face in the second photo and that there’s an ostensible lack of excess skin and stretch marks.

At first, Simone didn’t respond to her haters.

But a few days later, she posted a photo with her pants folded down.

“I don’t [know] why, but every single comment that called me out for being fake and a liar really bothered me far more than it should,” Anderson wrote on Instagram. “I think it’s because it took hours of crying and debating whether to share my story online and for others to see, posting the first picture online along with my weight for the world to see [was] the hardest thing I have ever done.”

“Yes, my hair and eyebrows are a different colour as I’m going back to blonde, yes, I have changed my phone from Samsung to Apple and have moved house so the background has changed,” she continued. “Yes, I have loose skin and stretch marks, but I don’t feel the need to show them in every single photo I post online.”

Simone is now raising money on Givealittle for surgery to have her excess skin removed. So far, she has raised a little over $4,000. 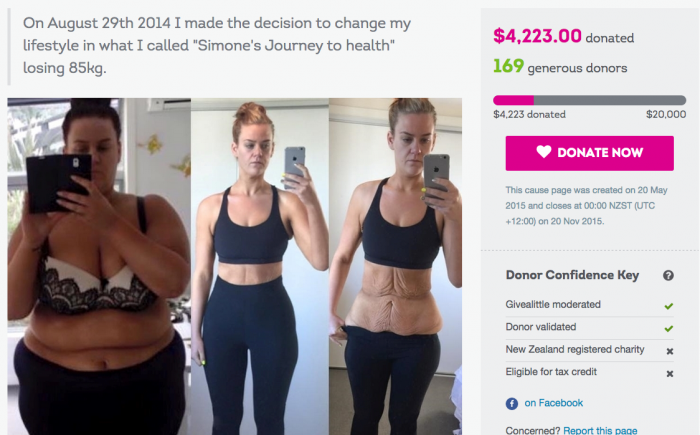 Simone told Buzzfeed that she hopes chronicling her weight loss — stretch marks and all — inspires others. “We would be a much better world if we all started to truly love ourselves from the inside out,” she said.