Here’s How to be a Perfect SNL ‘Weekend Update’ Host 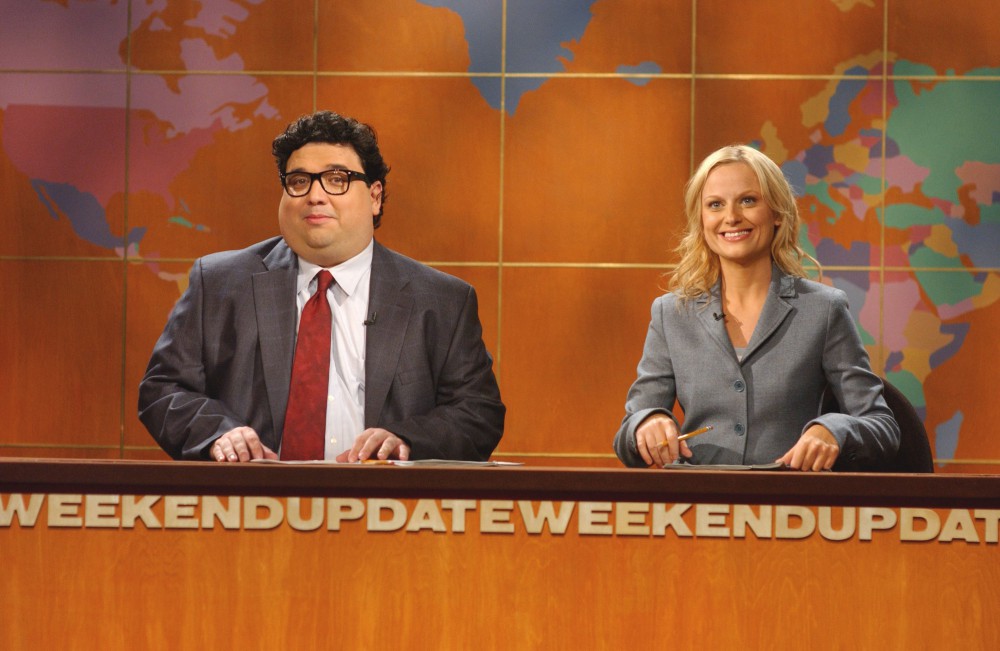 With the 40th Anniversary of Saturday Night Live being celebrated this weekend, it’s essential to look back on one of the few constants in the history of the show: ‘Weekend Update.’

When you think “Weekend Update,” what SNL era do you think of? Everyone’s got their favorite host and character segments, and every host brings a unique flavor to the segment so firmly planted in our culture. (Full disclosure: I’m a Seth-head, “Update” not “Late Night.” There’s a difference.)

Whether it’s gone by the name of ‘Weekend Update” or not – the segment cycled through both “SNL NewsBreak” and “Saturday Night News” in the five years Lorne Michaels wasn’t producing – it’s a known honor to be selected to host the beloved segment of Saturday Night Live, and one that is difficult to master.

More so than any other area of the show, “Update” matters because it’s where a lot of people get a portion of their news, and there’s a measure of responsibility that comes with satirizing the news because, ideally, writers are informing and providing commentary in one fell swoop — and it’s supposed to look easy.

So who can take on this hosting responsibility with the most success? Someone we made up. Here it is, the makings of the Perfect Weekend Update Host (or, PWUH).

You’ve got to have charisma.

The most delicate balance the PWUH must make is the ability to deliver jokes like a comedian while keeping the pedigree and composure of a news anchor, and not every predecessor has been successful. If you’re Charles Rocket (1981-82), you worked as a real anchor previously and have sporadic comedic timing, but if you’re Jimmy Fallon (2000-2004) you can’t get through a joke without cracking a smile and relying on boyish charm to make up for lack of togetherness.

Charisma can mean a lot of different things in this context – it could be falling back on natural charm like Chevy Chase, or it could be as simple as knowing when to deliver a joke deadpan and when to tear your shirt off a la Jane Curtin. The PWUH is steadfast with tricks up their sleeve, not a complete loose cannon.

Who Did It Best: Chevy Chase, Jane Curtin, Norm Macdonald
Who Did It Worst: Colin Quinn

You’ve got to be a solid writer.

While this isn’t a hard and fast rule, writing your own material and being intimately familiar with the material and its development is only an advantage. In the past fifteen years, it’s become customary for the Update anchor to also serve as the show’s head writer — Tina Fey, Seth Meyers and Colin Jost all anchored the desk while also helming the writing for the entire broadcast with a team of professional writers. In past years, other hosts have been on writing staff but not necessarily in charge.

While the advantage of being a writer as the PWUH is a stronger connection with the jokes, the disadvantage is that there will never be a head writer who is not also attractive and a solid performer in addition to being a great writer. In a way, this is a disservice to deserving writers with the skills to run a writing room competently and may very well be the funnier joke writer, but couldn’t take the gig because they’re unable to fill the very specific dimensions of a PWUH.

You’ve got to be an excellent performer.

This is true for every SNL cast member, but worth mentioning sheerly because there have been hosts of Weekend Update who have missed the mark by a long shot. There are some major SNL stars who were never given the honor of manning the desk – major personalities like Gilda Radner, Adam Sandler, Will Ferrell and Kristen Wiig come to mind – partly because they were put to better use playing the high-energy characters that drove the interview portion of the segment.

The PWUH is the type of performer that has a ton of energy and is giving to partners, but can command an audience with no trouble. Big personalities who anchored the show tended to go on to have acting careers in film and TV, while more writing-focused hosts continued to write for themselves or others, but generally have less acting range. (That includes you, Tina baby).

Who Did It Best: Kevin Nealon, Amy Poehler, Dennis Miller
Who Did It Worst: Colin Quinn

You need to be OK with being the straight man.

When you’re anchoring Weekend Update, you’re essentially playing the character of a news reporter – sure, sometimes they have fun, but the majority of the job is delivering funny stuff with a straight face. This isn’t as easy as it looks, especially when it comes to dealing with the bevy of hilarious, bizarre characters that drop in for interviews on the segment, all the way from Roseanne Rosannadanna to Drunk Uncle and Stefon.

The PWUH knows when to turn up the funny and when to let their castmates shine. The interview is the time for the host to step back, and engaging too much creates a bizarre audience tug of war that ultimately distracts from the focus of the sketch.

Who Did It Best: Seth Meyers, Norm Macdonald
Who Did It Worst: Jimmy Fallon, Dennis Miller

But not too much of a straight man.

While some Weekend Update hosts were too impossibly goofy to be believed as a person who keeps up with the news, much less deliver it, there’s also the opposite issue of not having enough charisma to be able to interact with the character guests.

Sure, the host isn’t the main element of these interviews, but they are a critical one – after all, they’re providing the pathways for characters to bring the funny, and are tasked with matching and keeping up with their enemies without trying to steal the show themselves.

A great example of hosts indulging their guests without upstaging them is the timeless love story of Seth Meyers and Stefon (Bill Hader). Meyers tolerates Stefon’s ridiculous ramblings about clubs and resists his affection, but always gives in by the end.

Who Did It Best: Seth Meyers, Chevy Chase, Tina Fey
Who Did It Worst: Colin Quinn

You’ve got to have a strong point of view.

As the first all-female duo to host “Weekend Update” and bring enough energy to fuel an eighteen-wheeler, Tina and Amy easily take the cake on this one. The duo tackled issues relevant to women with a lighthearted, iron-fisted approach that inspired a generation of female comedians. Remember “bitches get stuff done“?

This doesn’t mean you need to be representing a movement to be a PWUH, though it certainly doesn’t hurt. Norm Macdonald was eternally sarcastic, Chevy Chase turned every story into his own sexcapade, Jimmy Fallon was just there to have fun and be the little brother, and Jane Curtin was the uptight news type who let loose every once in a while.

These are all valid and unique points of view that were effective on the show. The PWUH doesn’t phone it in, and knows that even though they’re reading one-liners, the secret success is to have a character behind those lines instead of a mere talking head.

Who Did It Best: Tina Fey & Amy Poehler, Chevy Chase, Michael Che
Who Did It Worst: Charles Rocket

You’ve got to be the audience proxy.

With the amount of insanity that’s liable to arise through the character interview and celebrity guest appearances alone, the PWUH acts not just as the harbinger of news, but the audience’s window into the world of Weekend Update. They’re accessible, acknowledging the weirdness of both the news and the people around them without breaking character.

Communicating this can be as simple as a little look to the audience when delivering an especially bizarre news story of hacky one-liner it’s clear the PWUH didn’t write – they know what the audience is thinking, and is their ally.

Who Did It Best: Seth Meyers, Jimmy Fallon
Who Did It Worst: Colin Quinn

You’ve got to deliver the joke like it’s news.

While Weekend Update’s main story focuses tend to be either huge news (think Lewinsky scandal) or weird, highly specific news (think weird behavior at a drive thru), the PWUH treats every story as equally significant and deserving of the audience’s attention.

Norm Macdonald exemplified this in his slightly sarcastic, always straight-shooting news persona who chose his moments to indulge in the weirdness of a story, but didn’t make it a habit.

Who Did It Best: Norm MacDonald, Cecily Strong
Who Did It Worst: Kevin Nealon, Jimmy Fallon

You need to have chemistry with your cohost.

This rule doesn’t apply to solo hosts like Norm Macdonald, Kevin Nealon and Colin Quinn, but the PWUH with a co-host must have chemistry or their own talent tends to under-deliver. Pairings like Fallon and Fey, Fey and Poehler, and Curtin and Aykroyd worked off each other during segments, often initiating physical bits.

When this natural chemistry between hosts and balance of composure and goofiness is struck, this opens a whole new world of possibility. Could any other pairing but Fallon and Fey get away with being branded as “secretly married” unless they worked so well together? Probably not.

When the hosts of “Weekend Update” actually like each other, you can tell, and when they’ve never seen each other’s face outside of 30 Rockefeller Plaza, you can tell even more. Do you think Colin Jost and Michael Che have ever gotten a beer together?
Who Did It Best: Tina Fey & Amy Poehler
Who Did It Worst: Colin Jost & Michael Che

Have we ever been #blessed with a PWUH? Maybe not, but hey, at least it’s not Colin Quinn. (Sorry, boo.)

A decade of Wreck The Halls. END_OF_DOCUMENT_TOKEN_TO_BE_REPLACED

Leah Wellbaum from Slothrust brought her trusty six-string to Studio B and turned in the first RadioBDC Session of 2017. Check out her three songs and her chat with Julie Kramer, recorded live on February 28, 2017. END_OF_DOCUMENT_TOKEN_TO_BE_REPLACED

This should never have happened. END_OF_DOCUMENT_TOKEN_TO_BE_REPLACED

Comedian Myq Kaplan is a comedian named Myq Kaplan. He joined me in studio this afternoon, and he’s at Laugh Boston this weekend. Click here for tickets. END_OF_DOCUMENT_TOKEN_TO_BE_REPLACED

I spend far too much time on Twitter. Here’s a handful of posts from last year that I found to be entertaining on one level or another. Enjoy. END_OF_DOCUMENT_TOKEN_TO_BE_REPLACED