Watching Patriots/Broncos? 3 things NOT to think about 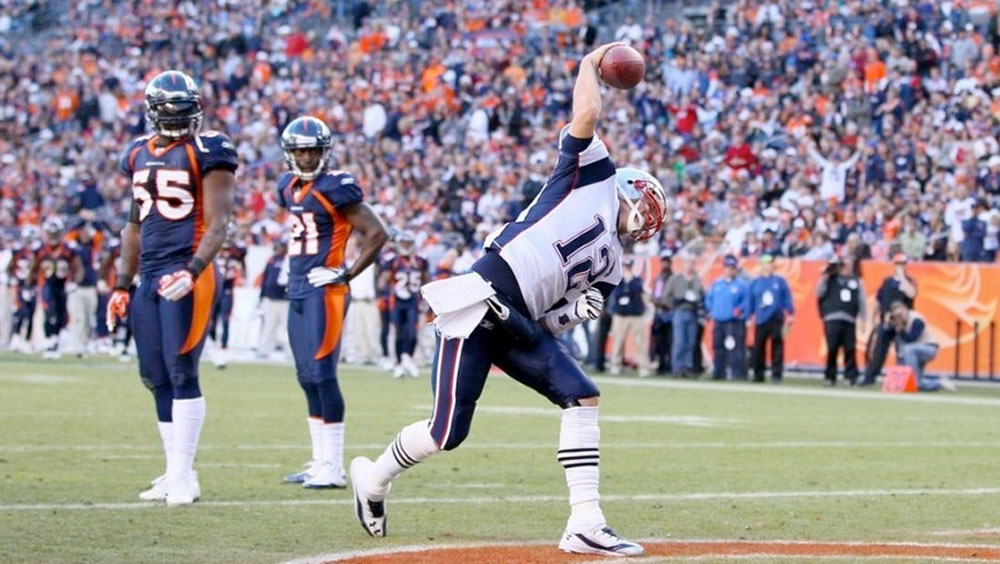 Here we go again. Sunday afternoon. Brady. Manning. Does anyone think this one isn’t going down to the wire? It has a different feel from other years, though. There’s less of a sense that the Patriots should win, more uncertainty about the team’s roster given the brutal drubbing it has taken at the hands of the injury gods. There’s always the temptation to be a homer, to insist, despite the dictates of reason, that the Pats should beat the Broncos or even that they are destined to hoist the Lombardi Trophy. I say be realistic: Don’t fight back against reality. Embrace it. Treat this as just one game. Enjoy the Pats and their underdog role and the ridiculous band of patched-together misfits that has come farther than they have any right to.

To promote this mindset, here are three things you shouldn’t think about while nailbiting your way through Sunday’s matchup of AFC powerhouses.

When it comes to simply winning games, Tom Brady is undeniably one of the best of all time. His overall record — an insane 166-50 — serves as a 10-story exclamation mark on a remarkable career (Peyton Manning, for those who are curious, has 11 more wins but 34 more losses). No one comes close to his .769 career winning percentage.

Playoffs-wise, though, Brady’s career simply stopped being special awhile ago. After winning his first 10 games — an astonishing achievement — often in something of a “game-manager” mode, Brady’s gone 8-7. In terms of QB rating, he’s gazing upward at all the other contemporary quarterbacks he shares the stratosphere with: Aaron Rodgers, Drew Brees, and Peyton Manning all have better career playoff ratings, as do Eli Manning and, gulp, Mark Sanchez (albeit in far fewer career games).

Yes, there’s a case to be made that QB rating is a stupid stat, and yes, it’s oversimplification given the numerous other factors at work (between the early and late parts of career Brady lost some guys on the other side of ball named Bruschi and Vrabel and Harrison and Law who you may have heard of). But this isn’t just a quantitative argument — it’s a qualitative one, too. You’ve seen Brady in the playoffs in recent years. Has he struck you as the brilliant, poised quarterback we’ve all come to develop unhealthy crushes on? Is there any sign opposing teams fear or dread him lately? Not saying it’s his fault — certainly he’s been roughed up by some Giants and Ravens and Jets defenders during recent playoff runs. But there has undeniably been a sizable distinction between Regular Season Brady and Playoff Brady in recent years. Hopefully it won’t continue on Sunday — hopefully the offense’s brilliant reinvention as a bruising run-first unit will continue.

I don’t expect Bengals or Chiefs or Browns fans to countenance Pats’ fans bellyaching about the team’s fortunes since they beat the Eagles in Super Bowl XXXIX. But we’re among friends here, and surely we’re smart enough to hold two slightly clashing thoughts in our heads at the same time: 1) the Brady-Belichick run has been incredible; and 2) were it not for a few bad bounces, it could have been arguably the most remarkable run in pro sports history, period.

I don’t need to tell you about Indy in 2007 or Glendale in 2009 or Indy again in 2012. You’re familiar with these heartbreaking losses, and by now you’ve internalized some of the hate directed at Pats’ fans nationwide for daring to complain about them after the brilliant run the team had between 2001 and 2005.

But the fact remains that if someone told you on Feb. 7, 2005 that the Patriots, coming off a third Super Bowl in four years and reveling in the existence of a still-very-young quarterback who was thus far incapable of losing in the playoffs, would go at least 10 years before earning another Lombardi Trophy, you would have been disappointed. Would this have made you spoiled? Sure, a little. But also human. Any other fan in the same position would have felt the same way.

Maybe the Pats missed out on an all-time run of Super Bowl greatness. But what Brady, Belichick, and (to a much lesser extent) co. have done during the past 13 seasons has been astounding. Eleven consecutive seasons of 10 wins or more — including one in which Brady played half a quarter, and all of them occurring over a period of parity (you may have heard that mentioned once or twice) in which other than the Manning-era Colts, who had a run of nine consecutive 10-win seasons, no one else came close.

The randomness of tipped balls and missed calls gets somewhat smoothed out over the course of a 16-game season. You can’t explain away this level of greatness. We’ve been privileged to witness it. Unfortunately, it can’t last much longer. Both coach and quarterback are much closer to the ends of their respective careers than the beginnings. The clock is ticking louder for TB12, and it’s hard to imagine a situation where Brady leaves and Belichick is able to keep the team at a championship-competing level. It’s scary to think about, given that it seems like just yesterday Brady was lifting that incredible, unlikely first trophy over his head, but our team could soon be headed to the bloated middle of NFL mediocrity — or worse — for years to come.

My point in all of this is not to dwell on missed opportunities or Brady’s mortality (if he is indeed mortal — I’m not entirely convinced). My point is that we need to acknowledge this history, but set it aside. The team set to take the field in the mountains on Saturday night is not like the Pats teams of recent years. It lacks talent on both sides of the ball, has been godsmacked by injury, and, in a world that made any sense, simply wouldn’t have gone 12-4 and wouldn’t be in the AFC Championship game. Despite all that, the Pats have a chance to do something amazing this weekend.

But whether they do or don’t do it, we should try to enjoy the ride, to put blinders on and enjoy a scrappy, undermanned team trying to knock off a superior opponent — a storyline not so different from the one Tom Brady and Bill Belichick first brought us in that incredible winter of 2002.