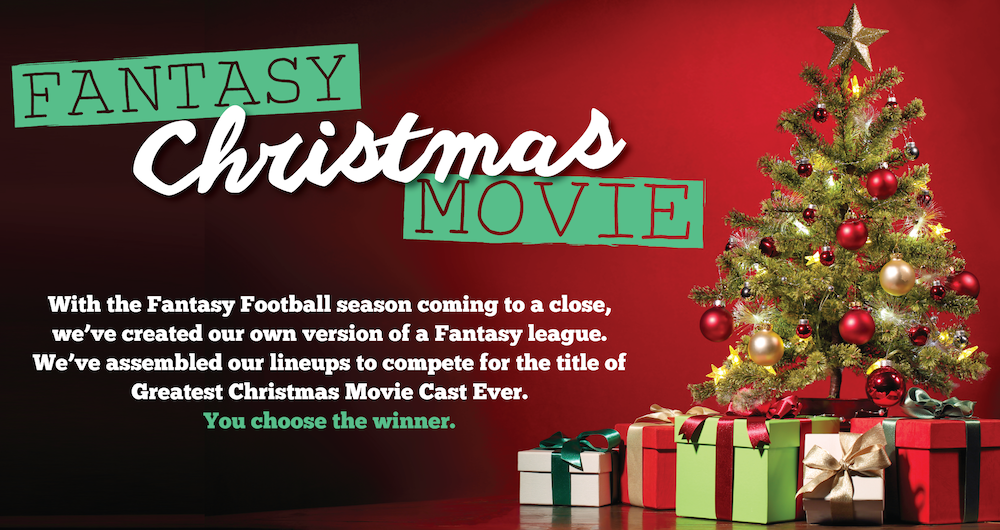 After a quick draft, our designer Eric Silva whipped up some Christmas-colored rosters for the league’s six teams. And now it’s up to you to vote for your favorite team. Whether you vote based on potential football talent or simply pick your favorite characters is unimportant. The only thing that matters is that the popular vote determine a single winner, so one of us has bragging rights for the next couple of weeks.

To aid you in your difficult decision, each team’s owner has prepared a few words arguing for their team’s superiority. 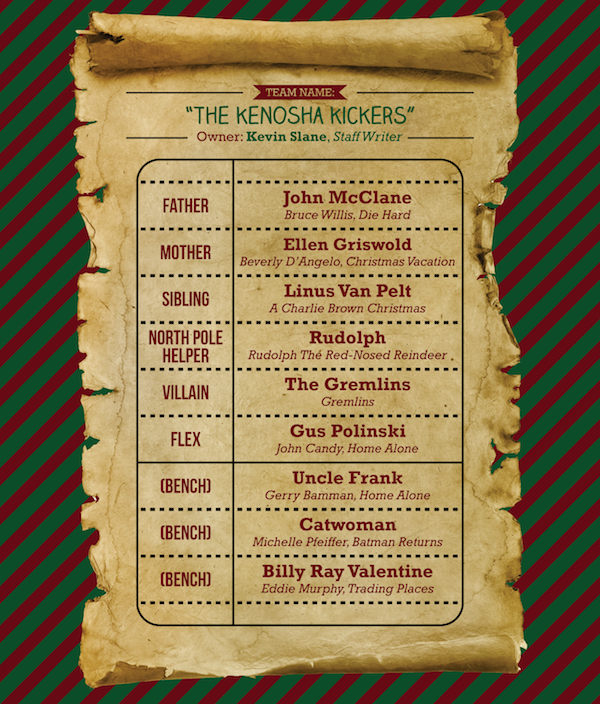 The Kenosha Kickers
John McClane may not be the best father, but he’s the best father to lead a fantasy Christmas movie team. Pair him with Ellen Griswold, and the cherubic well-meaning son they would have produced surely would have been Linus Van Pelt, the only player out there who really knows what Christmas is about.

The real strength of The Kenosha Kickers is in the bench, where Uncle Frank has eligibility at the Father, Sibling, and Villain slots. Even if someone on the Kickers suffered a tragic injury — say, someone blew up a movie theater and the Gremlins were inside, for example — my squad runs deep. — Kevin Slane, Staff Writer 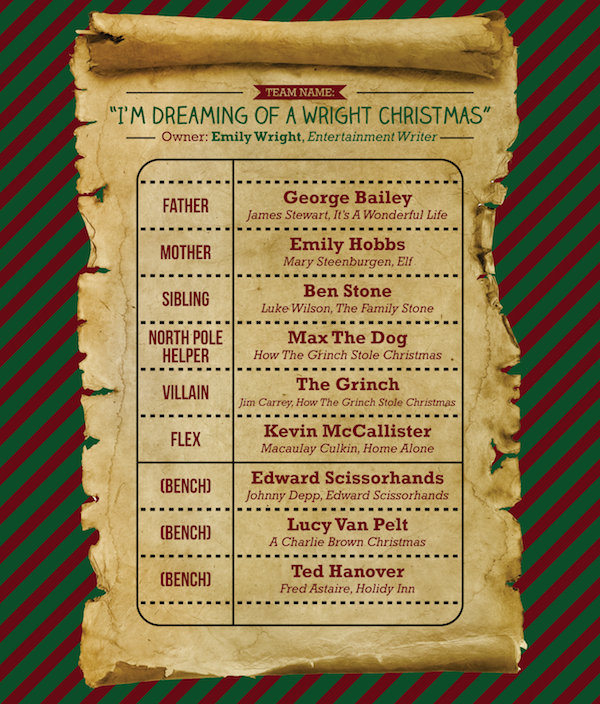 I’m Dreaming of a Wright Christmas
Nothing says warm and welcoming like a crackling fire — or Christmas movie parents George Bailey (you know, after Clarence works his magic) and Emily Hobbs (who else would welcome an elf-raised human into their home?). They’re bolstered by Ben Stone, filmmaker and laidback brother extraordinaire, Max the Dog, who’s always down to help his master, and the best villain of all, The Grinch — because he’s not actually a villain in the least. Kevin McCallister, the world’s bravest and most inventive kid fills the flex slot. 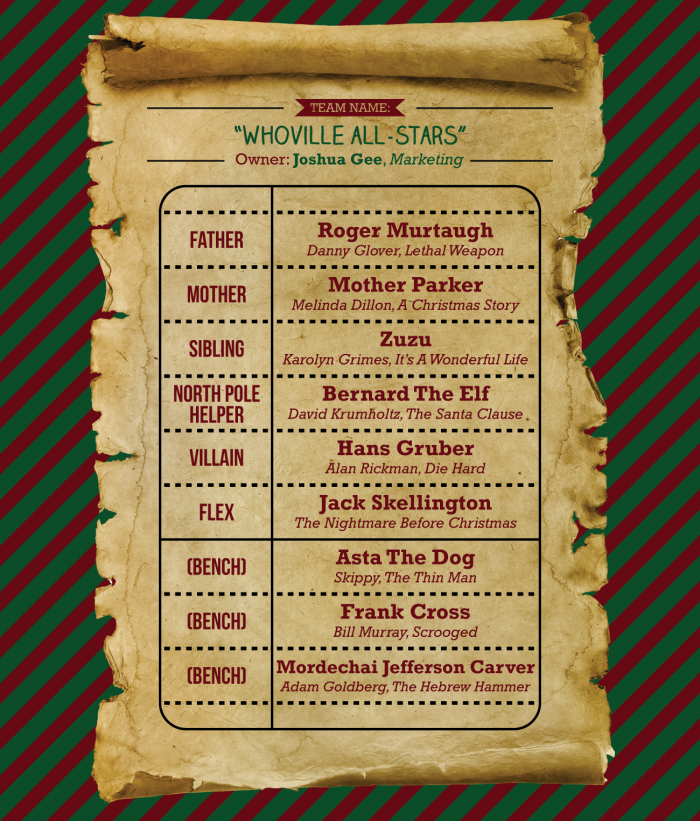 Whoville All-Stars
We looked outside what people traditionally think of as holiday movies to put together a roster of all-stars, veterans, and young talent. Like “Major League,” but EVEN MORE HEARTWARMING.

Mother Parker is not just the ultimate holiday movie mom, but the ultimate movie mom, period. Hans Gruber and Jack Skellington are probably the strongest Villain and Flex plays in this league. Roger Murtaugh is as beleaguered as any Christmas dad. Bernard The Elf’s sarcastic performance makes him a sleeper to watch. Not to mention a bench made up of players who would be starting on any other team in this league. That means we’re going to be competitive for all 12 days of Christmas, and well into the New Year.

And Zuzu? “Teacher says every time a bell rings, you just got your ass handed to you.” — Josh Gee, Marketing 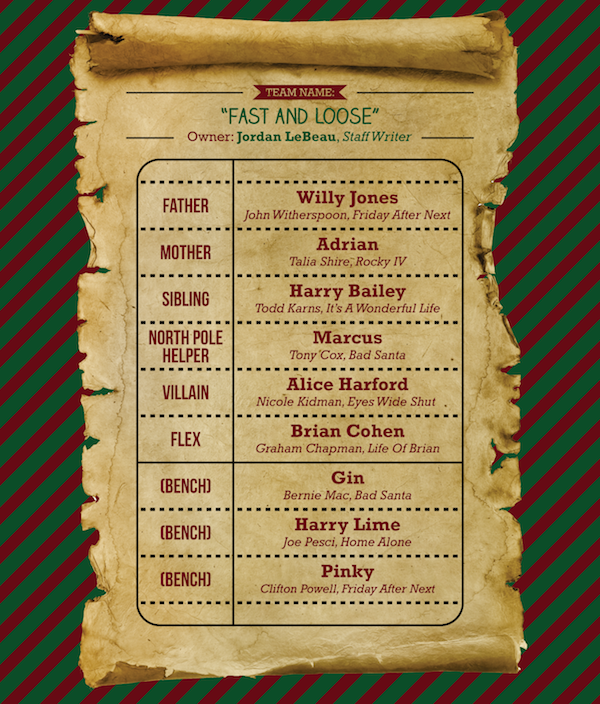 Fast and Loose
My team is scrappy. There are no stars on this team; I’ve assembled a roster of Yuletide grinders. Where would Rocky be without Adrian? How would Craig have found the strength to whoop Debo in the first “Friday” if it wasn’t for his dad, Willy? And where would this world be without Bernie Mac? You can, nay, must find it in your heart to vote for my motley, meat-and-potatoes crew of X-mas X-factors. — Jordan Lebeau, Staff Writer 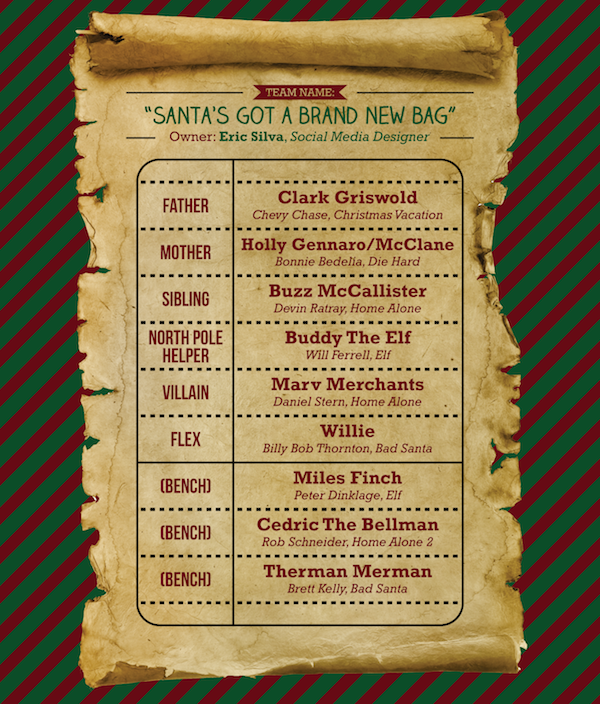 Santa’s Got a Brand New Bag
I don’t see how anyone could argue the superiority of my team. Clark Griswold is easily the G.O.A.T. when it comes to Christmas movie dads. Marv Merchants is unbeatable in the villain slot. Buddy the Elf is untouchable. Willie doesn’t put up with any nonsense.

And even if my starting lineup wasn’t dominant enough (which it is), my bench is packed full of starters. I mean, c’mon… THERMAN MERMAN! This isn’t even a competition. It’s a bloodbath. STOP THE FIGHT! “Santa’s Got A Brand New Bag” with a blowout win! — Eric Silva, Social Media Designer 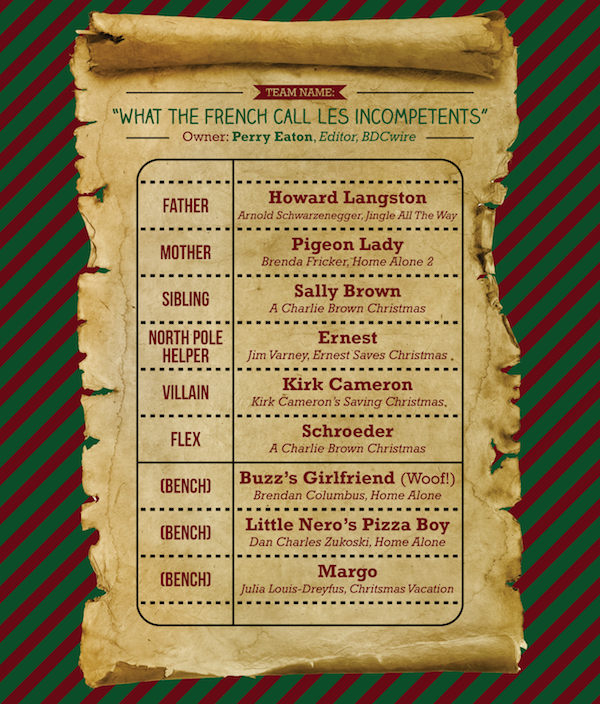 What the French Call Les Incompetents
When Arnold Schwarzenegger is the father, you’ve got a family that everyone can be proud of. Especially if that family contains an array of vibrant personalities, from the backwoods accidental heroism of Ernest, to metal-mouthed smile of Buzz’s Girlfriend (woof), to the Gen X snark of the Little Nero’s Pizza Boy.

Sprinkle on a cartoon who can tickle the ivories with the best of ’em, an overzealous religious asshole (every family needs one!), and a high-pitched baby sister– has there ever been more of a winning combination? “I don’t know, Margo!” — Perry Eaton, Editor, BDCwire

And now, the vote. Polls close at midnight, so don’t delay.

The Black and Gold continue their run tonight at TD Garden. END_OF_DOCUMENT_TOKEN_TO_BE_REPLACED

Who will make the Class of 2018? END_OF_DOCUMENT_TOKEN_TO_BE_REPLACED

It’s been awhile since we talked Black and Gold. END_OF_DOCUMENT_TOKEN_TO_BE_REPLACED

You’re going to wish you were in the Northern Alps. END_OF_DOCUMENT_TOKEN_TO_BE_REPLACED

END_OF_DOCUMENT_TOKEN_TO_BE_REPLACED

Bill might be “on to Tennessee,” but we’re not. END_OF_DOCUMENT_TOKEN_TO_BE_REPLACED