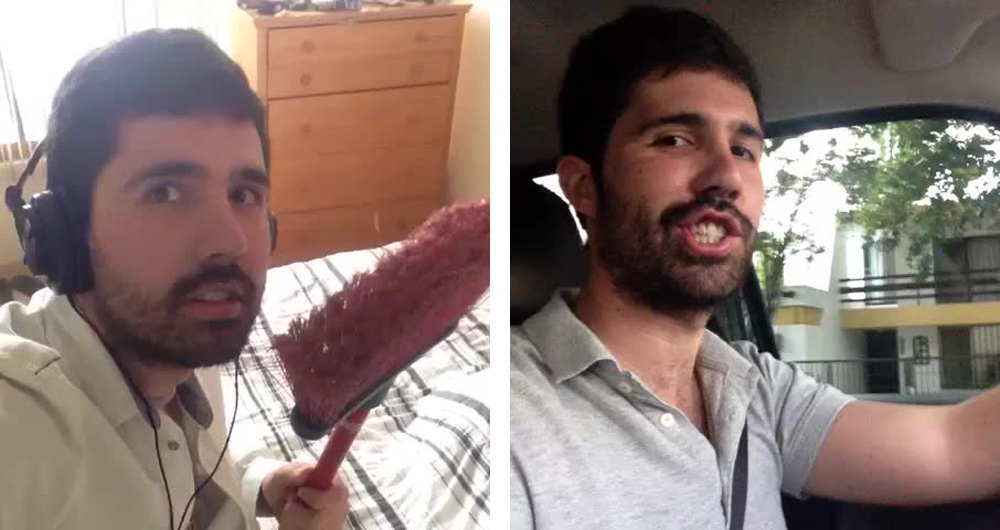 Cali Robles takes the crown as Viner of the Week because whatever your reaction to his social media presence may be, his reaction to every other form of media is the defining quality of his account. Robles’s specialty is taking well-known audio and video clips, then simply recording his comical reaction to them.

He doesn’t discriminate on the type or age of media he features, either. He had a cringe-filled reaction to Nicki Minaj’s signature laugh at the beginning of “Anaconda” AND Jack Dawson’s infamous spit scene in Titanic. Even within his self-scripted skits (in which he plays every character) the plot is still reaction-based. Since the official Vine site dubbed him as “Popular Now” his already impressive 200k fan base has been growing every day. His posting dedication has been on point for the past two weeks, so if you’re interested in seeing Robles’ dramatic reaction to pop culture, old and new, strike now while he is embracing his trending vine fame.

In several of his vines, he reacts to the same creepy baby mask. He just changes the context from vine to vine with different introductions. In one of these vines, “#imblindnow,” a mother (AKA Robles in a hoodie) tells a stranger (AKA Robles wearing the same hoodie) to look at her beautiful baby (AKA Robles still wearing that hoodie but also wearing the wrinkled baby mask) and the stranger freaks out.

Tapping into our childhood memories, Robles reminds us about how abrasive the THX sound check sound was. Even though the infamous noise sounds the same every time it plays, at the same aggressive decibel, Robles captures the impact it has on people who just want to watch a nice movie at a normal level.

In “Everytime someone knows I am a medical student…” Robles offers his personal reaction to the public’s expectation of him as a medical practitioner. Apparently people think that his pending medical degree means he has the magical capability of diagnosing anyone, anywhere, any time. And, no pun intended, he is sick of it.

Robles doesn’t always have negative reactions to things. In “Shaq strikes again now on a TV commercial,” he can’t help but break into a “little shake, a little tingle” inspired dance. He can’t even take the grin off his face whilst he embraces the catchy jingle.

A decade of Wreck The Halls. END_OF_DOCUMENT_TOKEN_TO_BE_REPLACED

Leah Wellbaum from Slothrust brought her trusty six-string to Studio B and turned in the first RadioBDC Session of 2017. Check out her three songs and her chat with Julie Kramer, recorded live on February 28, 2017. END_OF_DOCUMENT_TOKEN_TO_BE_REPLACED

This should never have happened. END_OF_DOCUMENT_TOKEN_TO_BE_REPLACED

I spend far too much time on Twitter. Here’s a handful of posts from last year that I found to be entertaining on one level or another. Enjoy. END_OF_DOCUMENT_TOKEN_TO_BE_REPLACED

Mike McColgan and Lenny Lashley of Street Dogs were in session on November 30, 2016 to play three songs and chat about their annual Wreck The Halls shows at Brighton Music Hall December 15-18. END_OF_DOCUMENT_TOKEN_TO_BE_REPLACED

Tegan and Sara stopped by for a chat before their House of Blues show on Halloween night. END_OF_DOCUMENT_TOKEN_TO_BE_REPLACED