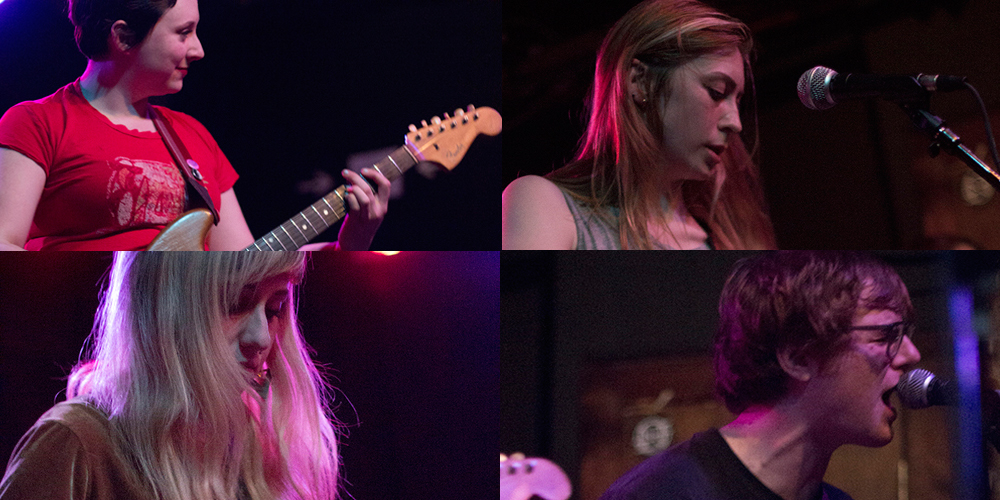 How does a band keep its own identity when every media outlet pushes them as a comparison to their surroundings? For Philadelphia band Swearin’, it’s comparisons to Waxahatchee, which shares both members and bloodlines. For Potty Mouth, it is riot grrrl, “all chick bands,” and the exploding Western Massachusetts music scene. How is a band to set itself apart from these factors while remaining unscathed and unshaped by the press? I discussed these topics and more with Allison and Jeff from Swearin’, Abby and Ally from Potty Mouth, and Potty Mouth’s tour friend Sam, on Saturday evening at their show at Great Scott.

The six of us gathered in the Swearin’ tour van to enjoy a bit of a quiet break from the bustling sold out crowd. First topics included weed, of course. According to Allison of Swearin’, a Big Muff box is the perfect size for traveling with weed on tour. She says that she doesn’t smoke before she plays, but told a story of when Swearin’ toured with Waxahatchee (led by Allison’s sister, Katie Crutchfield), splitting “a Rice Krispy treat that it turns out had over a quarter ounce of weed in it before we played, and it was the most intense drug experience of my life. It was awful.” They ended up sitting in a dark room as Waxahatchee played, and once they took the stage, Swearin’ played six songs without a single word between. Jeff called it “terrifying.”

“The moral of the story is be really careful before you eat weed when you’re in California.” He says.

Quickly, the discussion morphed into a more serious theme that was a bit surreal for me to listen to: interview topics. Allison said, “If I ever do an interview, and it gets printed into something, they’ll do a big quote. They always pick the one I’m most embarrassed about.”

Ally chimes in with a quote from an interview that band mate Abby did recently. She says in a sarcastic tone, “these songs are inspired by our day to day lives.” So deep. It’s interesting to see the idea of the interview from a different perspective than my own. I started to second-guess my own purpose of the evening. Is my own credibility as a writer at stake?

“This represents me. This is it,” Allison says. Everything about a band is printed or published online for the world take too seriously. Abby says, “It’s what ‘Twisted’ is about. It’s one of our new songs. Annoying writers misrepresenting. BOOM YEAH!”

Allison wrote a song about the topic as well. “That shit is a bummer. Maybe we’re more self-conscious than we should be.” Ally thinks out loud on the subject, “If anything, we’re not perfectly objective and over-analyze what we say.”

“It’s hard to relax,” says Allison. This is all happening as I listen to them bare a bit of their insecurity to me. I find some comfort in it. They talk back and forth about how interviewers lead you and try to mold you to their own pre-determined narrative.

“Something that Victoria [drummer, Potty Mouth] and I have been talking about lately is how we’re just framed. People find it very interesting that when Potty Mouth started, Abby and Phoebe hadn’t played guitar before. It IS interesting, but that was three years ago. People still like to impose this kind of narrative of us being an inexperienced band… wait a second. I’ve been playing bass for five years now. At what point do we stop talking about this?”

“Swearin’ experiences this same thing. We are constantly just linked to Waxahatchee,” says Allison. “I don’t think there’s ever been a Swearin’ article that has not mentioned Katie at some point. There are four people in our band. We are intertwined a lot. We’re good friends… and obviously related. It’s just like such a weird close-knit family, but it misrepresents our band in a lot of ways. It makes our band just more about me in this way that we don’t like.”

“I do think that people focus on one fact [Allison looks to Abby], like that you’re super young, and that makes the band more about you than they realize. It doesn’t necessarily cause tension, but we’re four people.”

Identity is hard for any one person to find, but linking that identity to form a cohesive unit, like in a band, is an even harder accomplishment. Both Swearin’ and Potty Mouth struggle with it as many other bands do within their career. Allison’s advice: “Maybe move on from this one little thing.”

“Ever since we put out the new record [2013’s Surfing Strange] it’s been less about that.” She comes back with, “To be fair, in most Waxahatchee articles, they mention me. We’re twins. We’re both in bands. We’re different… I love her [Katie]; she’s my best friend.”

Ally gets deep with Potty Mouth’s supposed identity: “People want to find patterns and reasons for everything. We’re constantly asked like, (in surfer-bro journalist voice) ‘so what the fuck’s like going on with Western Mass right now with all these bands all at once? Did you guys like get together and plan it or something?’” Abby jokes, “We’re all plotting together in Western Mass. Just because there are a few bands doing pretty well from that, all the sudden people view it as this music area.” Ally explains, “People can’t just let coincidence be coincidence; they want to attach some kind of story to it.”

Jeff jokes, “What about Dinosaur Jr?”

He’s right though. Western Mass isn’t just “in” right now. Bands have always come and gone. Some musicians find a home there like J. Mascis and Kim Gordon, but it has always been a hotbed for music and art.

The conversation switches from its serious tone to sharing celebrity-sighting stories. Abby running into J. Mascis in Provincetown and Molly Ringwald at a SoHo coffee shop that Allison once worked at.

Sam takes the lead in the interview and asks, “What is the forest creature that you would embody if you had to be fancy?” He is referencing the show that the two bands would play the next night in Western Mass which took the theme of “Enchanted Forest.” Abby thinks she is a rabbit. Allison a finch. Ally is an owl and Sam is a red-tailed hawk.

We brainstormed touring money schemes for Sam, including but not limited to: selling her underwear, forming pop-up flea markets, buying cheap cartons of cigarettes and flipping them for more at shows, re-selling regional snacks like crab chips, or just a classic tip jar.

Abby tells a story of the party at the “patriarchy aka panarchy” at Dartmouth College from night before. She was keeping Victoria company when a guy walked up to her and asked, “so you guys are an all-chick band? So like, Paramore?” The van bursts into laughter.

Jeff suggests they put it on the tour flyer: “for fans of Paramore.”

“As ridiculous as it sounds, we’ll get tweets from venues promoting the shows that say like ‘Like Bikini Kill? Then you’ll LOVE Potty Mouth.’” Ally says. “Playing with these broads on Broad St.” is another good one Jeff points out, referencing a band they had played with previously. “Swearin’ and Potty Mouth are basically synonyms. We should market our tour together: ‘See the synonyms.’”

Enter to win tickets to see Trio Da Kali at The Villa Victoria Center of the Arts (Newton, MA) on April 10th. END_OF_DOCUMENT_TOKEN_TO_BE_REPLACED

END_OF_DOCUMENT_TOKEN_TO_BE_REPLACED

Enter to win tickets to Rhye at The Paradise on February 28th. END_OF_DOCUMENT_TOKEN_TO_BE_REPLACED

Her new album has been pushed back, but we have Kimbra’s new single for you. END_OF_DOCUMENT_TOKEN_TO_BE_REPLACED

The folk duo returns with a new record this week. END_OF_DOCUMENT_TOKEN_TO_BE_REPLACED

Now that we’re done looking back at 2017, let’s look ahead at 2018. END_OF_DOCUMENT_TOKEN_TO_BE_REPLACED

Our first Song of the Week for 2018. END_OF_DOCUMENT_TOKEN_TO_BE_REPLACED

In a year when so many things were off, the music was right on. END_OF_DOCUMENT_TOKEN_TO_BE_REPLACED