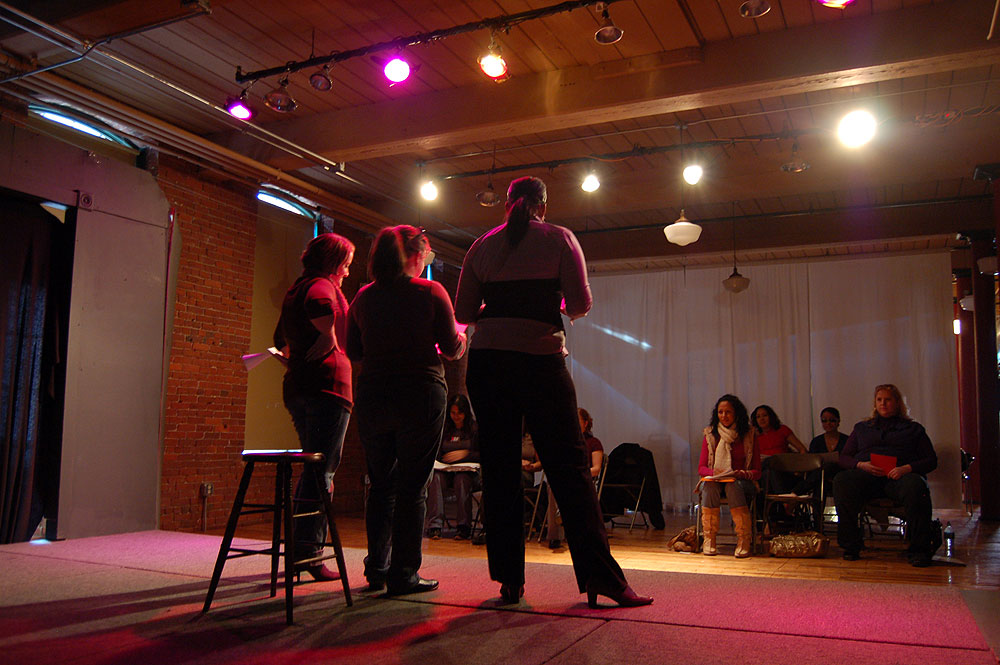 Whitney Henderson has been involved with V-Day, an annual movement near Valentine’s Day to end violence against women and girls around the globe, since her first semester of college in 2005. A staple of V-Day is “The Vagina Monologues,” and this year, Henderson, Asha Chana, and Karen Durham will be putting on a production in Somerville for the second time. Last year, they raised $1,100 each for three local beneficiaries. We spoke to Whitney Henderson about this year’s performances on Feb. 28 and March 1.

Q. What were the first steps you took in planning this year’s production?

A. A lot of it was based on last year’s performance. A friend from college [Chana], I met through “Vagina Monologues,” it turns out recently moved to Somerville just down the street. We decided if we’re going to be living this close to each other, we both really miss that community of women, that safe space. The play is so much fun, so we just said, “Let’s do this!” A lot of it was built off that. We were lucky in that last year we ended up identifying someone who not only has an acting background but also has has a directing background, and she has come on board again as our artistic director, Karen Durham. Overall, it just came together very easily. We had women that we had never met who came and auditioned for the show. Last year at least five women, not including Asha nor myself [that] went to college with us at Providence College, just happened to be in the area. This year, it was many new women from different backgrounds and experiences.

Q. Part of the V-Day movement is supporting causes and charities. What charities is this specific performance supporting and how did you pick them?

A. We have three beneficiaries this year. As part of V-Day, you actually get the rights to the play for free, which is fairly rare. You usually have to pay a lot of money to get the rights for this play. Because we get it for free, there are a lot of rules we have to abide by, one of them being that you have to donate 10 percent of all the money you raise toward the V-Day Foundation. This helps cover things like overhead of the V-Day movement and their funding of various causes around the world. In years previous, they helped found a women’s hospital in the Democratic Republic of Congo, which has been deemed by numerous sources as the most dangerous place in the world for women. Ten percent of our raised funds overall go to the V-Day Foundation, but the other 90 percent we can choose however we want. It does have to be a local organization, so we chose three.

One of them is Respond, Inc. They are a domestic violence and advocacy center based in Union Square in Somerville, the longest running one in Massachusetts. The second one is Girls Leap, a non-profit based in Dorchester. It’s a self-defense and self-esteem program for middle and high school girls, building self-confidence and self-defense so they feel safer. We chose that one, because one of the actresses who was in the production last year became their part-time development manager. She was telling us how much she loved the work and how it was really reaching out to women and girls in the inner city. They reach out to women who probably have a higher likelihood of being attacked at some point in their life. We thought that was really good work being done. The third and last one is Amirah. It is a fairly new organization [that] is a safe house and recovery home for women who have been commercially and sexually exploited, survivors of human trafficking. Human trafficking has always been one of my main advocacy causes since I’ve been in Boston, and I heard about Amirah when it was still in the works. It just so happens that one of my good friends from graduate school became the program director. I got to learn all the ins and outs of what they do. What’s nice about their approach is they have a whole person, holistic approach. You’re not just being treated for medical issues but mental, physical, spiritual, educational, skill building — the whole picture.

Q. What advice do you have for someone who might be going to see “The Vagina Monologues” for the first time? What should they expect?

A. [Laughs] I guess it depends on the person’s background, and their context of what they think feminism is in this world. I saw it as a senior in high school, not really knowing what it was, but wow, it was an eye-opener. It really did change my life. I think it’s different for men and women. I know some men who love it and fully support the play and its goals. I have also known women who cringe at the word “vagina.” I guess one thing to keep in mind, [the creator Eve Ensler] interviewed over 200 women of all races, ages, [and] backgrounds, and that’s where these stories come from. Some of them are based on one woman’s story or multiple women’s stories. You have to keep in mind that despite how it’s said, how it’s performed, it’s based on someone’s story. Be prepared to laugh, because some of them are just downright hilarious. Some of them are very heavy, especially the ones where you’re learning what atrocities women and young girls around the world face every day.

Last year, we did have at least one therapist/trained rape counselor present at the performance. We’re also going to try to do that this year, because we realize that a lot of these heavy topics, they are triggering. Let’s face it: One in three women worldwide will be beaten, raped, or abused at some point in their life. If there are 300 people in the audience, and they’re all women, you do the math.

Q. What advice would you give someone who might be thinking of setting up their own V-Day production of “The Vagina Monologues”?

A. Oh my God, can we be friends? Definitely reach out to the V-Day website. There are so many different forums, whether that’s LISTSERV or Facebook groups. There’s a huge community of activists all over the world. Some people have been doing this once, some people have been doing this since “Vagina Monologues” was started. You gotta get used to saying the word “vagina” a lot. Just be open to anything and everything. Be patient. Get a really good planner broken down day-by-day. You cannot do it alone. You have to have a good team, a good support team with you, so you don’t go crazy.

A. I am not a native of Massachusetts, but I love Somerville. I don’t particularly ever want to leave it. Since I first moved here in August 2009, I’ve noticed that there is this wonderful sense of community throughout. I think that sets this production apart. I think we have a really good cast this year, different ages, different backgrounds. In fact, one woman who is in our cast was pregnant. Her due date was the week after the show, but she actually gave birth to her first child, a boy, two days ago. Less than 24 hours after giving birth, she emailed us saying, “Alright, so I may still be able to do this!”

Q. Which of the monologues is your favorite?

A. That’s hard. That’s like choosing which is your favorite tea or which is your favorite child. I’m partial to “The Flood.” This monologue pertains to experiences of older women between the ages of 65 and 75. The interviewer was talking with one woman who was 72 [and] had never even seen her vagina. She talked to her therapist, as they do in New York. She went home, drew a bath, lit some candles, played some music, and she got down with herself. She said it took her over an hour because she was arthritic, but when she finally found her clitoris, she said she cried. “The Flood” is from the perspective of an older woman who was in her teens in the 1950s and just how she had an experience and after that she just didn’t really associate with anything “down there.” That one’s always a fun one to do. There’s also “Angry Vagina,” and that one just addresses some of the issues that women, at least in the western part of the world, have to experience every day like: tampons, gynecological visits, thongs, douches, and the overall “Why is the world trying to clean everything up and make it pretty?” No, I don’t want that. That’s the mentality of it.

Tickets for V-Day Somerville at the Center for the Arts at The Armory, 191 Highland Ave., Somerville, can be purchased through Brown Paper Tickets here. They are $10 for students and seniors, $15 general admission, or $20 VIP(general ticket + raffle tickets) plus applicable service fees. More information can be found on the Facebook page.

END_OF_DOCUMENT_TOKEN_TO_BE_REPLACED

Enter to win a pair of tickets to attend The Hess Collection Seminar and Dinner as part of Boston Wine Festival 2018 at the Boston Harbor Hotel on Wednesday, March 14th. END_OF_DOCUMENT_TOKEN_TO_BE_REPLACED

I referred to it as the “best kept secret” in Boston arts for the holidays. END_OF_DOCUMENT_TOKEN_TO_BE_REPLACED

Boston’s arts scene shines at this time of year. END_OF_DOCUMENT_TOKEN_TO_BE_REPLACED

It’s so much more than a holiday show. END_OF_DOCUMENT_TOKEN_TO_BE_REPLACED

Rock for a cause this holiday season. END_OF_DOCUMENT_TOKEN_TO_BE_REPLACED

Get out and see a show this holiday season, and save some money when you do. END_OF_DOCUMENT_TOKEN_TO_BE_REPLACED

You can help give the gift of music to kids in need this holiday season. END_OF_DOCUMENT_TOKEN_TO_BE_REPLACED

Be honest: when’s the last time you attended a Gala? END_OF_DOCUMENT_TOKEN_TO_BE_REPLACED