The Pitch: For Buskers, Sometimes Blending in Is Best 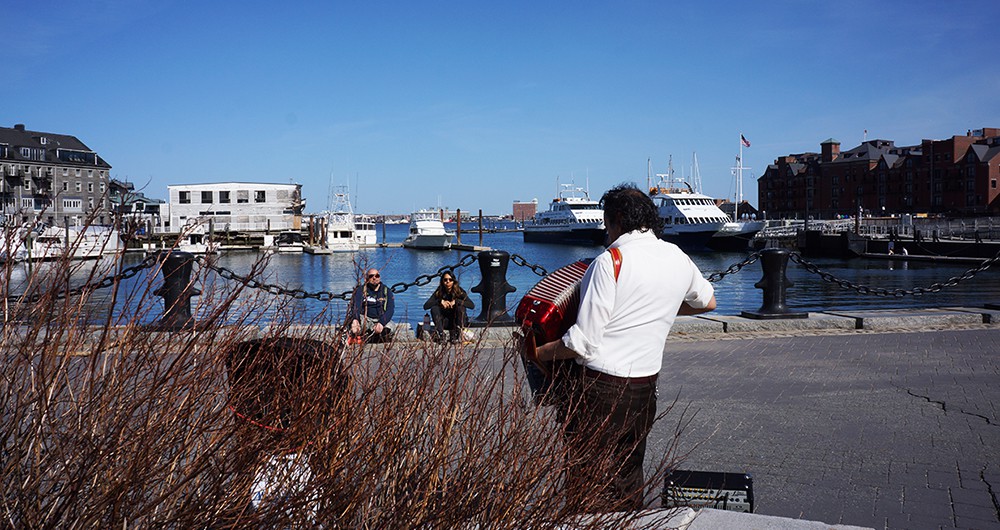 Boston’s bouquet of buskers also contains orchids: musicians whose playing is so elegant—so technically refined—that you can’t help but wonder if they aren’t simply using the subway or the street as an alternative to formal rehearsal space. After all, Boston has limited stock of official rehearsal spaces…

It’s also important to be reminded from time to time how much of a difference context makes in our perception and valuation of art.

Though it has received some critique around its methods, the 2007 Washington Post experiment that observed responses to a world renowned violinist playing a world renowned violin as a busker in the DC Metro, does highlight how differently attention (and cash) is doled out to the same artwork presented in a public space versus a concert hall. The talent and the music are the same, but one setting makes an orchid of a musician seem majestic. In the other setting, orchids have limited meaning. 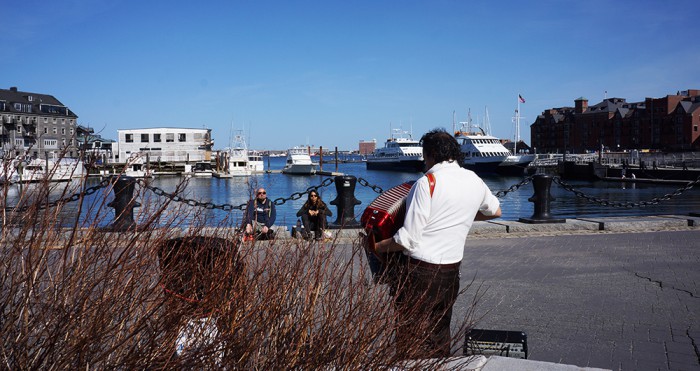 Another of Boston’s orchids is pictured above. His accordion playing is sublime. If you stand beside him and look out to sea, it feels as if he’s conjuring up the entire view with his accordion. What he’s playing at any given moment for any given crowd ranges from the famous circus song (actually called “Over the Waves“…) to things that are completely unrecognizable, except as old. Very, very old.

This busker agreed to be interviewed for this series and then changed his mind, so we’re left not knowing what those old songs are or where they come from. We can only appreciate them (and him) in the moment…

In the course of creating this series, profoundly talented buskers of all varieties were invited to participate and declined. Others were recommended, but never found.

Some, like Garv Bomjan and Steppers Heaven were suggested by name. Others were simply an instrument and a location: “the hurdygurdy player in Harvard Square” or “the ehru player at Downtown Crossing,” “the Longy student who plays clarinet at Park Street” or “that guy who plays flamenco—I see him everywhere, man!”

In many cases, people just weren’t able to communicate in English well enough to be interviewed in English. If there had been a translator available, an interview with the amazing, unnamed ehru player could have happened.

And some people did not want to be interviewed. They had been interviewed before and felt burned by the experience. Though most were kind when declining, one busker said explicitly: “No press is good press!” There is a sense that people are giving enough of themselves and shouldn’t have to give interviews as well.

There are also folks who are barely here legally. Or living so precariously that making the time to do an interview is problematic. They can just manage to squeeze out the time to busk, but not to talk about busking.

You also really never know where people are coming from when they begin busking here. Stephen Baird, the busking expert and advocate quoted in the introduction to this series, has traced a repeating pattern throughout the history of busking.

And some—well, you only see them once. This whole series was inspired by a pair of buskers who might have just been passing through, as they were never spotted again, but keep your ears and eyes peeled anyway: they are a youngish blond girl with long hair and a nose ring and a much older black man in a fedora who plays blues guitar like he crawled here from the Mississippi Delta. She sings an ungodly good cover of Ray Charles’ Losing Hand.

So this section of the series is held open for them—the unnamed, unfound, and uninterviewed who are nonetheless among the best street musicians in Boston. Plus here’s one sentence devoted to the girl with the dreadlocks and the tiny dog getting set up to busk for the very first time on the Boston Commons—her friend standing by with his ukelele, ready to support her guitar playing if she’d just get started already and stop cracking nervous jokes. She may not be an orchid. But she may be.

There are many unnamed orchids out there, and even some unnamed wildflowers that still make such an impact on our travels through the city that they deserve a nod here. It’s far better than leaving an empty space where one of them should have been.

Once you start listening to good busking, a vacant pitch where you’re used to hearing someone play becomes the most silent place in the world.

Enter to win a pair of tickets to attend The Hess Collection Seminar and Dinner as part of Boston Wine Festival 2018 at the Boston Harbor Hotel on Wednesday, March 14th. END_OF_DOCUMENT_TOKEN_TO_BE_REPLACED

Abe Rybeck, founder and Executive Artistic Director of The Theater Offensive was in studio this morning to talk about ClimACTS! Bounce, which celebrates art loud and proud at Royale on Wednesday, May 3. END_OF_DOCUMENT_TOKEN_TO_BE_REPLACED

Melanie Gillespie is an author and the founder of Mel O’Drama School of Acting in Milton. She was in studio this morning to talk about her latest book Darlene and the Drama Queen and how acting can help kids to develop confidence. END_OF_DOCUMENT_TOKEN_TO_BE_REPLACED

We’re not suggesting coconuts migrate, but we are suggesting that you see Spamalot at North Shore Music Theatre, two weeks only, September 27 through October 9. Click here to grab your tickets, and click “more” to hear my interview with Brad Bradley, who plays Patsy. END_OF_DOCUMENT_TOKEN_TO_BE_REPLACED

You know Dracut, MA native Scott Grimes from television’s American Dad and ER. You know Bob Guiney from The Bachelor and The Bachelorette. But did you know the two are teaming up to raise funds for the Dracut Performing Arts Program? END_OF_DOCUMENT_TOKEN_TO_BE_REPLACED

Boston band Funeral Advantage is Tyler Kershaw. And Tyler Kershaw had a fun childhood, so it seems. END_OF_DOCUMENT_TOKEN_TO_BE_REPLACED

Perry put me on to daephne and the album blew my mind. END_OF_DOCUMENT_TOKEN_TO_BE_REPLACED