Today’s USA vs. Canada hockey game could be an all-time great 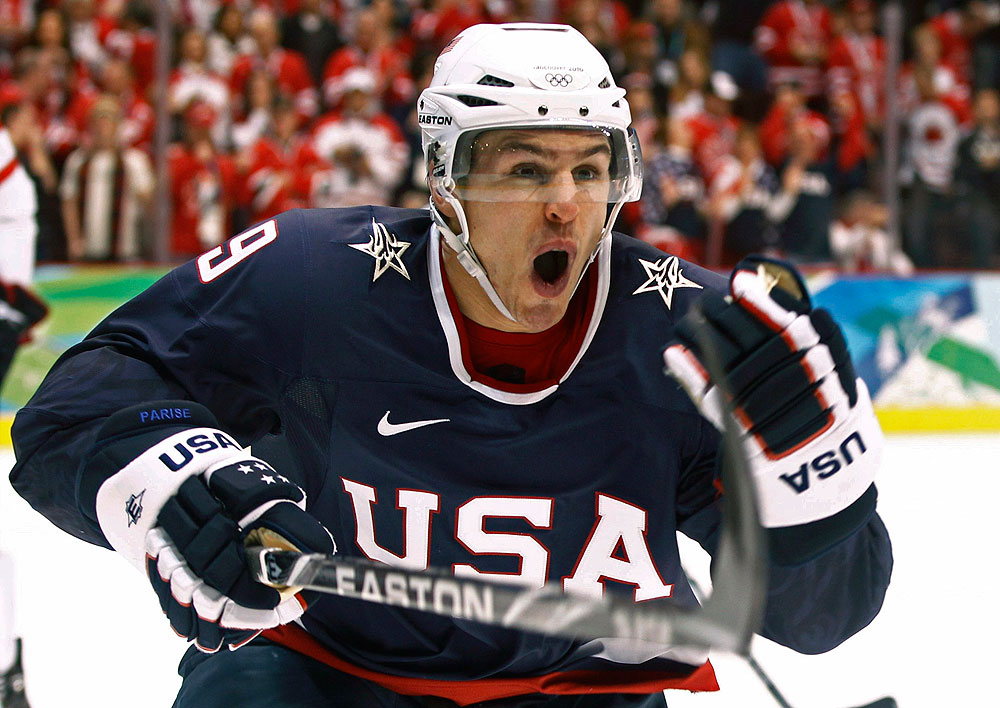 Thank heavens for hockey. If not for that, the Winter Olympics would be insufferable. Maybe I’m not really the sports nerd I think I am, maybe I’m afraid of different things, maybe I’m just an ugly American (there’s a photo over there on the left – you decide).

No matter the reason, I can’t stand the Winter Olympics. It’s nothing more than a two-week long reality show, with a few athletic competitions thrown in here and there. I don’t know the skeleton from the Super G from the triple salchow, and I really don’t care to.

But hockey represents the exception to the rule. The games, particularly as the tournament progresses, are on par with most NHL playoff games, which sit comfortably among the best, most exciting sporting events. The intensity level is through the roof and given that each country sends its best professional players, the overall skill at which each game is played elevates the proceedings to a different galaxy.

And today at noon, it’s the moment we’ve all been waiting for.

Team USA takes on Team Canada for the right to play for the gold. The only thing that would make this game any better would be if the winners actually left wearing medals, like in the overtime classic that closed out the 2010 Vancouver Olympics.

On one side, you’ll find the Canadians, the defending champions, the representatives of the birthplace of the sport. On the other stands Team USA, an outfit shooting to achieve its greatest feat since the miracle of 1980 in Lake Placid.

Both countries sent mega all-star teams to Sochi, as has been the custom since NHL players started participating in the Olympics in 1998. Team Canada is so loaded that Bruins center Patrice Bergeron, arguably the B’s best player, can’t even crack the lineup at his natural position and has been skating on the wing for the balance of the games.

The US, while also unbelievably talented, has more of a complete feel, with star role players like Washington defenseman John Carlson and St. Louis forward/shootout master T.J Oshie alongside big names like Chicago’s Patrick Kane and Minnesota’s Ryan Suter.

Team USA has been a wagon thus far, scoring a combined 20 goals in four games and only really being threatened in last weekend’s shootout win over Russia. Team Canada, on the other hand, has struggled, posting only one truly resounding win (6-0 over Austria in the preliminary round) in four games and barely getting past Latvia, not exactly a world hockey power, in the quarterfinals. The Canadians are still waiting for a breakout game from a majority of its superstar forwards, with Pittsburgh center/Bruins enemy Sidney Crosby at the front of the line.

It will be tough for these two teams to top the gold medal game from four years ago, when the US, having already beaten Team Canada in a preliminary round matchup, forced overtime on a Zach Parise goal with just 24 seconds left in the third period before Crosby ended the tournament off a tremendous give-and-go with then future teammate and current Bruin Jarome Iginla. It was widely considered one of the best games of all time.

But still, today’s contest has all the makings. Team Canada is trying to defend its title and there aren’t many squads it takes more pride in beating than Team USA. The US, meanwhile, has a chip on its collective shoulder after having lost in such heartbreaking fashion in 2010 and has played much better than the Canadians throughout.

The winner will face either Finland or Sweden for the gold on Sunday morning, but it feels like today marks the main event. Remember, Team USA’s win over the Soviet Union in 1980 was also in a semifinal. It’s possible for a matchup prior to the gold medal game to be even better.

Regardless, this game, and the entirety of both the men’s and the women’s tournaments have served as the highlights of these Olympics. Just like always.

The Black and Gold continue their run tonight at TD Garden. END_OF_DOCUMENT_TOKEN_TO_BE_REPLACED

Who will make the Class of 2018? END_OF_DOCUMENT_TOKEN_TO_BE_REPLACED

It’s been awhile since we talked Black and Gold. END_OF_DOCUMENT_TOKEN_TO_BE_REPLACED

You’re going to wish you were in the Northern Alps. END_OF_DOCUMENT_TOKEN_TO_BE_REPLACED

END_OF_DOCUMENT_TOKEN_TO_BE_REPLACED

Bill might be “on to Tennessee,” but we’re not. END_OF_DOCUMENT_TOKEN_TO_BE_REPLACED