This random act of kindness will remind you that empathy is possible anywhere. Even on the bus.

The good will of one man has caught the Internet by storm. A photo posted to the Only in Hamilton Facebook page on October 6 shows Godfrey Cuotto performing a random act of kindness, and it has since gone viral.

People near and far are commending Cuotto for comforting a special needs man while the two of them sat side by side on public transit last week.

Someone spotted the heartwarming moment, documented it, and submitted it to a Facebook page dedicated to documenting the goings-on in Hamilton, Ontario.

According to Huffington Post Canada, Cuotto thought he was being pranked when Robert held onto his hands after shaking them. But he soon realized what was really happening.

“I just allowed it, like what am I going to do?” Cuotto continued. “Sometimes you just have to be selfless and put someone else’s needs above yours.”

Cuotto stayed on the bus with Robert until the end of the line, according to the Independent. His generosity of spirit prompted a member of Robert’s family to reach out to and thank him for being kind to her Uncle. 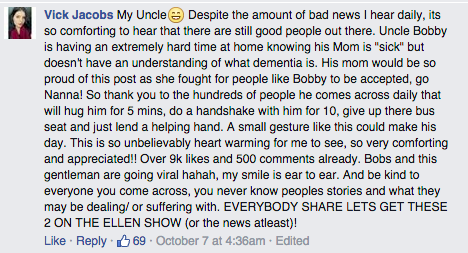