This Is My America: The Story of a Brazilian Barbecue Panic Attack 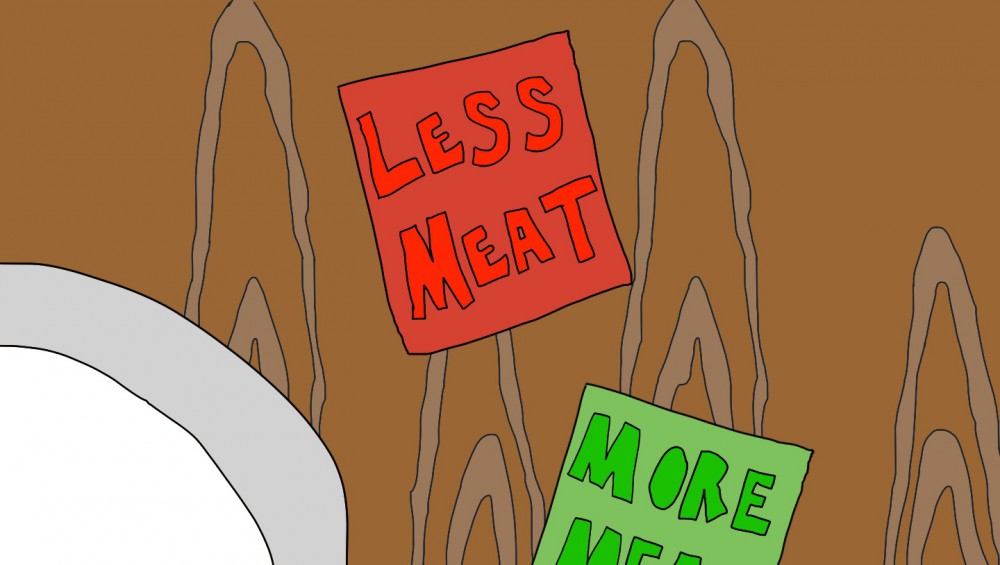 If you haven’t practiced self-love yet today, do so by not Googling the phrase “meat sweat,” a cultural term so vile it’s reserved for trucker hats, early episodes of Friends and within the hallowed walls of your local Brazilian barbecue restaurant.

It’s not certain if this disgusting phenomenon is even real, a fact that calls the past seventeen hours of my life into question – am I suffering from placebo meat sweats or a steady stream of tiny, pork-induced panic attacks?

Last night, I went to a Brazilian barbecue with my yes-man attitude and a forsaken anxiety pill refill, forgotten in a series of pressing short-term errands that all included coffee. Today, I am a victim of my own silly belief that anyone can handle anything, and that the human spirit is indomitable.

To be fair, I knew what I was getting into – I had been taken to the same discount Brazilian steakhouse with the same Groupon by the same bad boyfriend five or six times before. Birthday? Unlimited meat. Valentine’s Day? Unlimited meat. I’m-sorry-I-accidentally-starved-your-pet-turtle-when-you-were-on-vacation? So much meat, and don’t you dare order a beer because that’s not part of the Groupon. I am a barista, I am not made of money, Jamie. 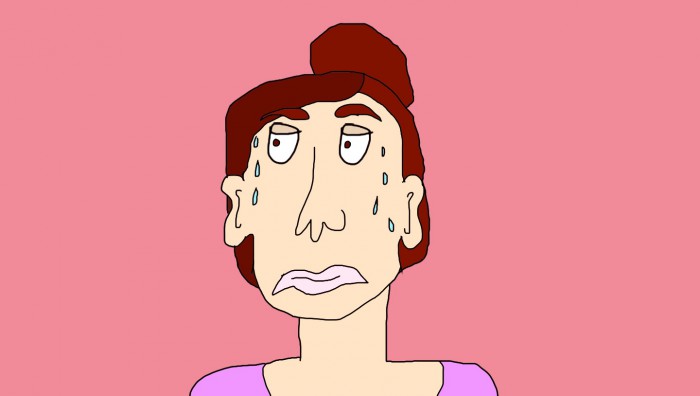 Based around the gaucho lifestyle of the 1800s (which also inspired a trend of ridiculous pants) current Brazilian steakhouse chains are inspired by the gauchos’ consumption of mass amounts of beef after killing a cow, a need inspired by a lack of preservatives. Today, the consumption of skewered meat in unlimited quantities is inspired by weird peer pressure from beef-peddling waiters and a lack of self-control.

I’m not going to tell you which meat emporium it was that led me to my downfall because at the end of the day, it’s me, not the meat that is the problem.

I was brought to this palace of beef by coworkers in light of recent success on a company project. I didn’t show any weakness or opposition, in part because of my college-born policy of never turning down a free meal under any circumstances. And because no one wants to be the one person to disagree on the restaurant. Instead, I will refer to this place by a different name every time.

The Boston satellite location of Brazilian Meat Sweat Emporium is a deceptively brilliant setup that aims to incapacitate its victims by parading around upwards of fifteen waiters with fifteen different skewers of meat at a time. They’ll ask patrons if they’d like a cut of this or that depending on whether their “meat card” was turned to stop or go. If you’re the type of person who has trouble saying no and the type of person to not refill their anxiety meds, this becomes a problem fast.

“Have you been to a Brazilian steakhouse before?” the hostess asks, with a glint in her eye that warns me that this is my last chance to leave this place, take shelter in the nearest Wendy’s and eat only the food that I ask for. I allow her to give us the full rundown as my meal-mates nod hungrily, listening as she talks us through the buffet, the meat cards, the beer list, and amazingly not the bathroom, an element of the Brazilian steakhouse experience that became pretty critical for the majority of the table. 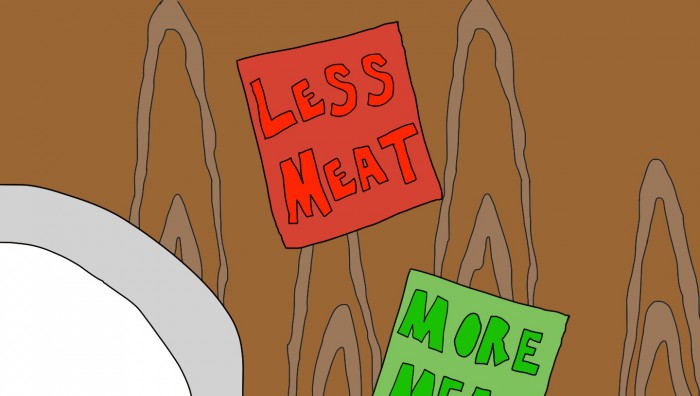 Testosterone hangs heavy in the air of these places like the garbage scent of a Hollister as I release some comically large slabs of cheddar cheese from their metal-plated prison. There’s a man at the buffet who is quietly mumbling the names of foods to himself as he drenches everything in salad dressing, a clear act to pretend that he does not frequent this establishment. To do so would be the height of hubris, and I quietly allow him this small victory as he rushes back to a table for one. He is already sweating.

A half hour into the meal, I feel at ease – the potatoes aren’t half bad, I’ve been served Diet Coke in a glass (!) and our meat cards remain as red as the blood of the restaurant’s best customers. We’re good, I think. This time is different. I miss my pet turtle. In a move intended to express togetherness, we flip our cards to green in unison.

There are a number of reasons why people have trouble saying no, according to blogger Celestine Chua – you’re afraid of being rude, you want to appear agreeable, you don’t want to burn bridges, among other things. This is where the role of the skewer-bearing waiters comes into play, making the experience of taking a slab of steak both personal and a test of endurance.

What is the job title of these beef-bearing waiters? What do they tell people they do when they’re on Tinder after a long day of meat-related duties? For the purposes of this article I will refer to them as “meat boys,” but know that that isn’t a commonly held term and absolutely shouldn’t be.

I can’t speak to what any of the meat boys look like because I was too afraid to make eye contact with them, but they should all abandon their posts immediately and take up a career in sales. Many of them ask “are you sure?” before moving to the next table if you don’t happen to be a fan of chicken hearts. It feels almost like handing them a rejection that isn’t a reflection of the corpses they carry, but of the meat boys themselves. This is a sentiment we all shared. 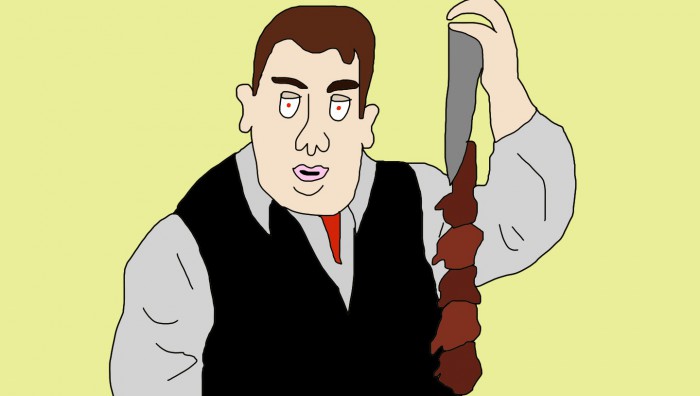 Though I constantly flipped my meat card back to the ‘stop’ setting, it only took 20 minutes to get more food than I had a prayer of finishing, implying that, not only must I appease the almighty meat boys, but I should also eat this stuff. Let’s do it for the meat boys, I tell myself, promising to finish the next cut of whatever is served.

And now, the meat sweat– or the beginning of a panic attack that comes with flipping your card to red before everyone else. What does this say about me? Am I able to keep up? Am I underperforming? Will they inevitably laugh in unison as I reject a meat boy, reflecting on how much better and stronger they are due to their increased capacity for beef storage? I look nervously between my three insatiable companions, waiting for a sign that there are grounds to fire you based on how much food you can consume in a single sitting.

One of the meat boys, the alpha meat boy as it were, possesses the same charisma of a Wall Street banker and a sexual approach to meat description (gross) that was everyone’s downfall. Who knew there were so many ways of saying “this cow has died”? When he wasn’t lurking in the crevices of the restaurant with an enormous beef skewer, he was over your shoulder, describing the meat to you as if it were his own child. I would have asked him out if I wasn’t so terrified of him.

“You done?” my coworker asks, and I’m suddenly reminded of dreams I had as a kid where people grow to ten times their size. The restaurant has defeated me and I know it, so I make a hasty retreat to the kitchen (which I thought was the bathroom), then outside for a moment to consider bolting, and the finally the actual ladies’ room.

The bathroom stalls of the Steakhouse Where Men of Excess Go to Die were cruelly small, considering the crimes of nature that undoubtedly occur inside them. They are, however, perfectly sized for what I needed: a compact panic room. I Google whether panic attacks can kill you or not (they can’t), whether Walgreens carries my medication yet (they don’t) and what the meat boys are actually called (there’s nothing). 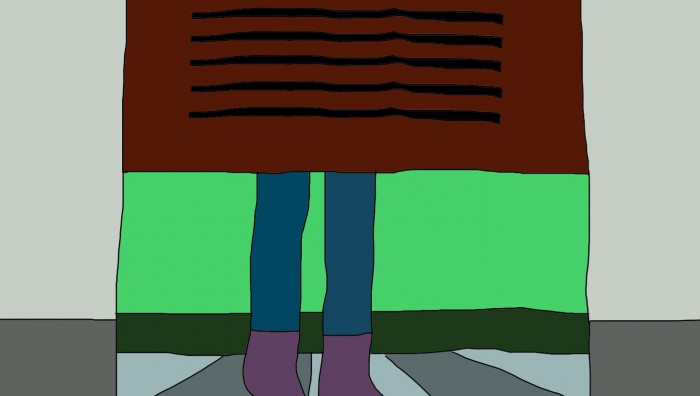 Are these tears or can your eyeballs sweat? Where are we? Who am I? I sit on a toilet wearing pants and question everything. I am nothing. I am everything. I don’t even know where Brazil is.

I return to the table ten minutes later, fully aware what it seems like I’ve been doing. The reality is, my body will trap this meat inside me for nearly a full day, as if to remind me that the human body is an incredible garbage factory that can produce all kinds of sounds. The work is complete – three clean plates and red cards sit atop the table, and I breathe a sigh of relief that is only a second or so long because there’s no room in my body for air. I am a person full of delicious corpses and unresolved anxiety issues, and I am going home.

So I take it all back – it’s me and the meat, a significantly less sexy take on “Me Against the Music” that features me crying in a public bathroom instead of Madonna in leather, though the theme of dead cows is consistent. If you’ll excuse me, I need to go sweat and call Walgreens again.

It’s been a crazy week with all the snow. We need a drink. END_OF_DOCUMENT_TOKEN_TO_BE_REPLACED

Amazing sandwiches for a good cause? Make a bunch for us! END_OF_DOCUMENT_TOKEN_TO_BE_REPLACED

And they came to our studios, too! END_OF_DOCUMENT_TOKEN_TO_BE_REPLACED

It’s almost time send off 2017 and welcome in 2018, and we have some ideas about how you can do precisely that. END_OF_DOCUMENT_TOKEN_TO_BE_REPLACED

The pics alone will make you want to make a reservation. END_OF_DOCUMENT_TOKEN_TO_BE_REPLACED

Some people love cooking for the holidays. Others, not so much. END_OF_DOCUMENT_TOKEN_TO_BE_REPLACED

There’s so many to keep track of, you might have missed this one. END_OF_DOCUMENT_TOKEN_TO_BE_REPLACED

Looking to add a little more “cheers” to your holiday cheer? Pabu can help you. END_OF_DOCUMENT_TOKEN_TO_BE_REPLACED

The holiday season is in full swing at Royal Sonesta. END_OF_DOCUMENT_TOKEN_TO_BE_REPLACED