These badass presidential portraits are the most American thing ever 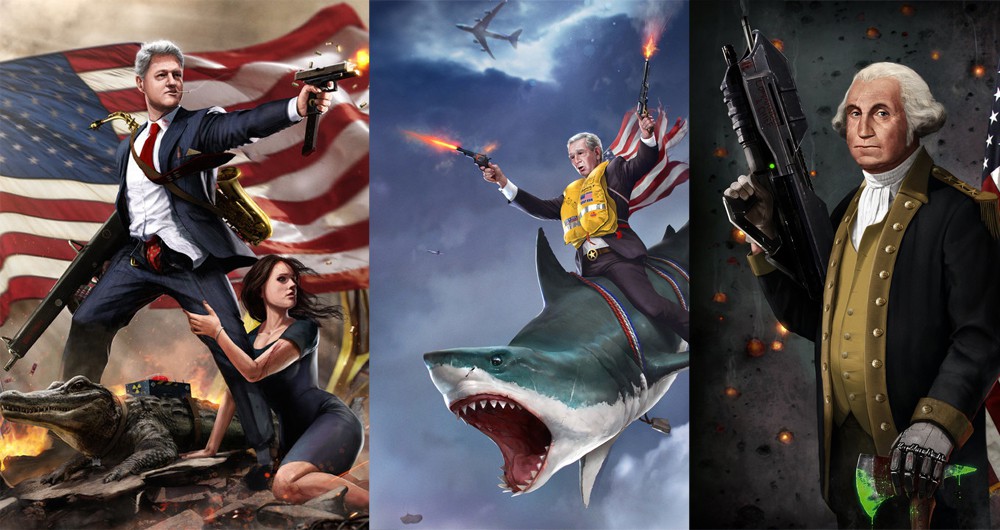 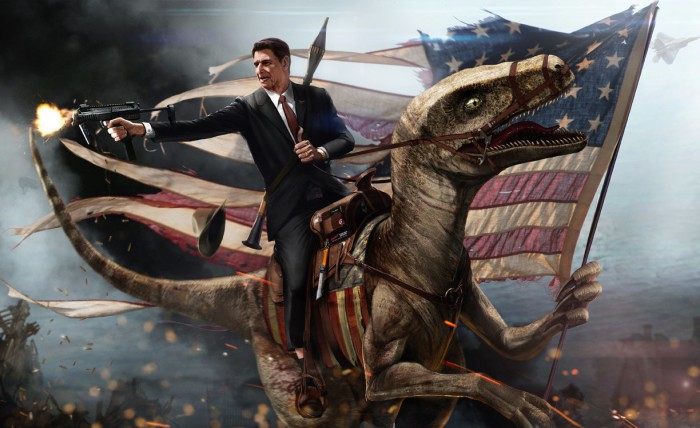 Or maybe George Bush flying through the sky firing a pair of pistols on the back of a great white shark? 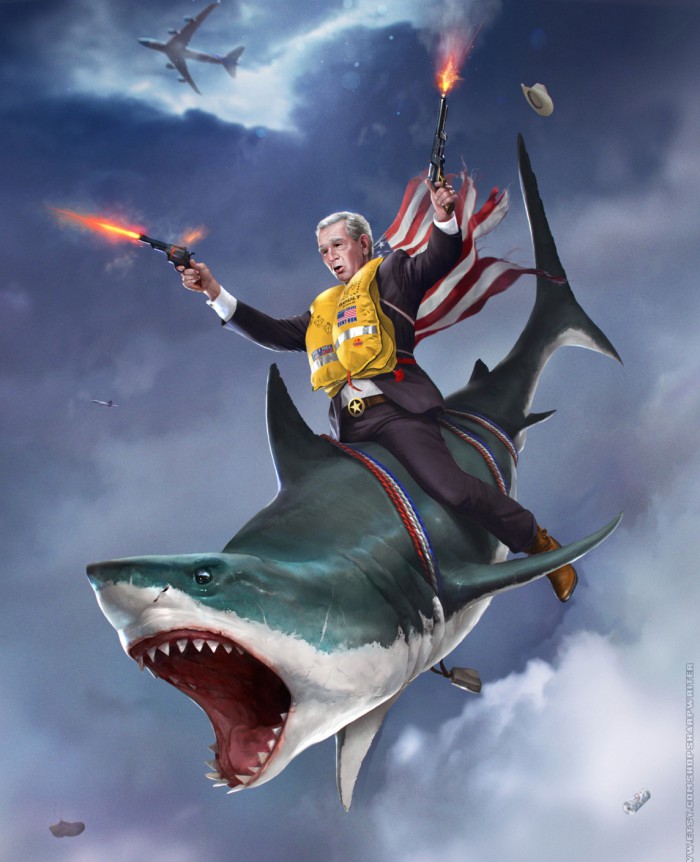 These epic pieces of presidential art are the work of Jason Heuser, a video game designer living in San Francisco. After an outpouring of positive response to his artwork on DeviantArt, Heuser began selling prints on Etsy.

We caught up with Heuser to ask him about his inspirations, his most popular portraits, and what we can expect from his future work. 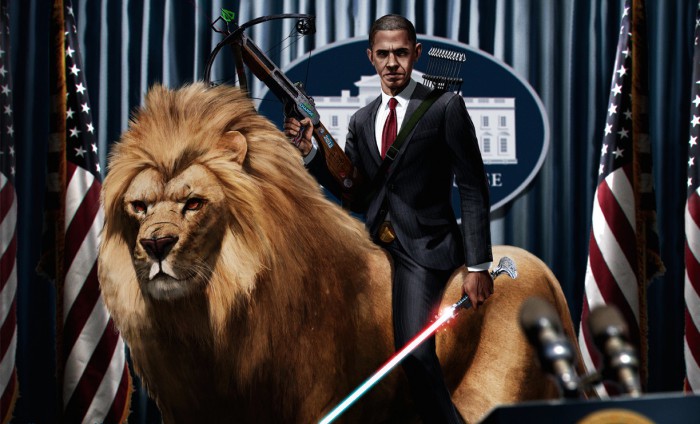 On how he got started: “It started by accident, really. I went to art school, but they had a really archaic digital program. By the time I got out, I didn’t know what I needed to know. I worked for three years as a security guard and during that time I basically sat at a desk for eight hours and would bring my laptop and draw.” 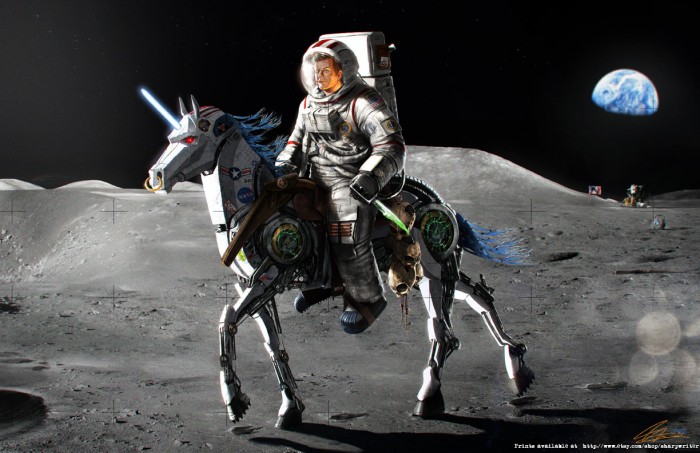 On success: My art kept getting featured on DeviantArt, and eventually it got the attention of Kixeye Game Studios in San Francisco. They gave me a job, moved me out here, and I’ve been drawing whatever they need ever since. In my free time, I just paint the ridiculous shit you see on my website.”

On the art process: “When I’m drawing I’ll watch history or a movie — I’m currently watching Parks & Rec — but I always have something on in the background, otherwise I can’t focus. I’ve got ADD or something. PBS has a great documentary series on the presidents, and I’ll typically watch that so I can learn about them while I’m painting them.” 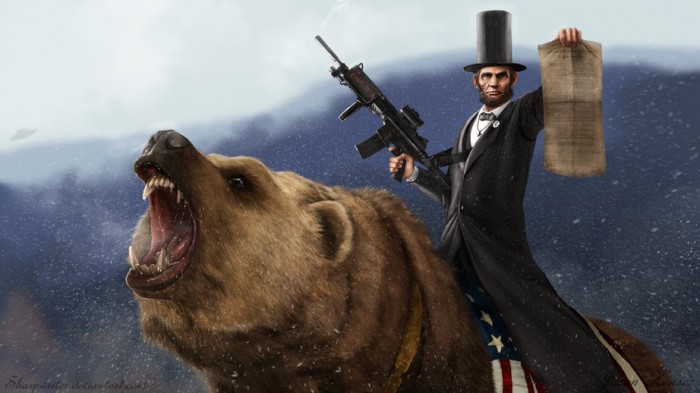 On the Easter Eggs in his paintings: “I did that Bush painting because people kept asking for him. That’s my number one most requested. Everyone wants him. I gave him a Texas Ranger belt buckle, a Colt revolver in one hand and the Dirty Harry .44 magnum in the other. He’s got a Vote for Jeb button — which I thought would be funny in Comic Sans — and an ‘I Heart Florida’ sticker on his vest.” 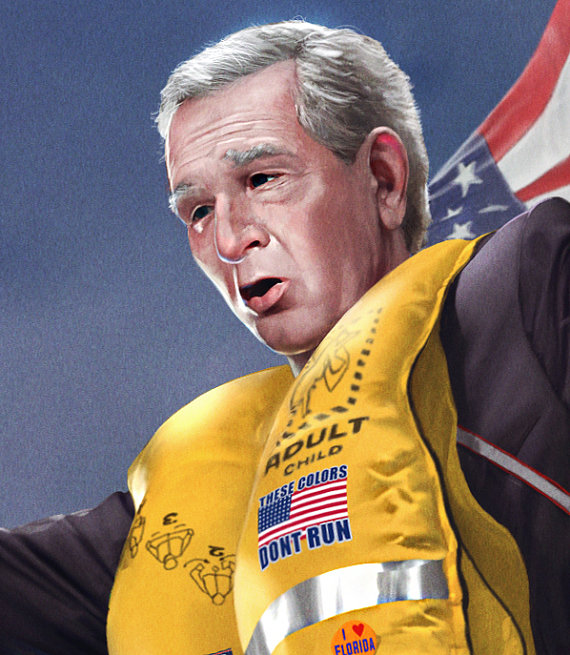 “All of those things embodies his presidency to me — ‘This is America, these colors don’t run, we’ll fight terrorists, we’ll come for you.’ I don’t try to make him look good or bad, I just like the juxtaposition of taking a president or famous person and putting them in an over-the-top scenario.” 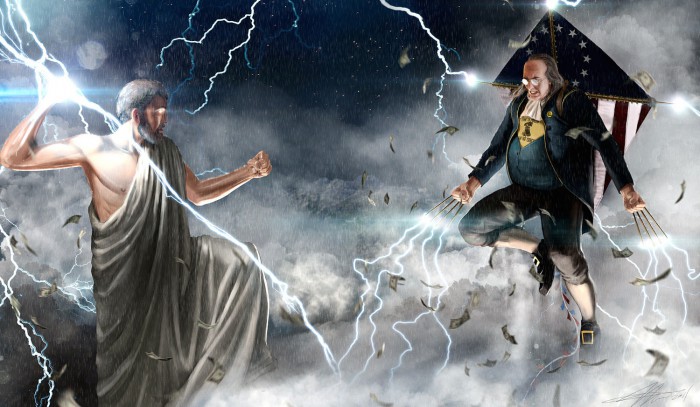 On future projects: “I’m going to do a whole line of the 2016 nominees. I’m going to start painting them as they show up. I want to do a bracket of them. Maybe do Bernie Sanders vs. Hillary Clinton in a Mortal Kombat-style face off.”

On the secret to his success: “I’m just a weird artist dude who got Internet popular. I’m not too special, just a random guy who takes the time to draw the shit that other people might not.” 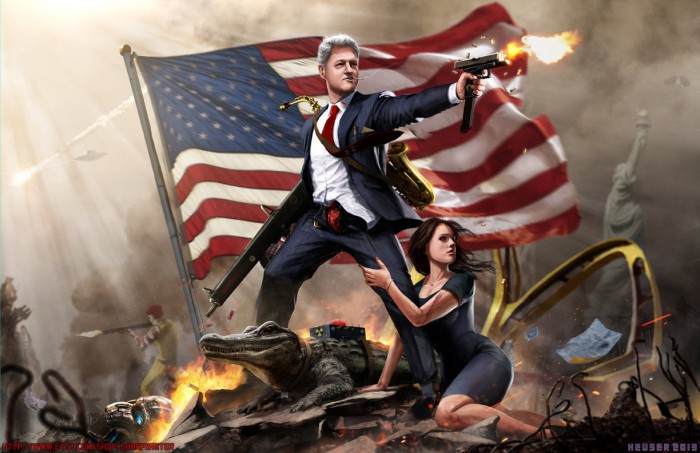 Artists for Humanity Co-founder Jason Talbot and Major Gifts Director Emily Smaldon were in studio this morning with Mallory Bazinet, Event Manager for GrandTen Distilling. Jason and Mallory talked about The Contemporaries, their upcoming event to launch a new patron group for young professionals. Click here to join them on Thursday, August 17! END_OF_DOCUMENT_TOKEN_TO_BE_REPLACED

Aida Villarreal-Licona is the Events Coordinator for SoWa Boston’s Art & Design District. She was in today to talk about their holiday shopping event this Thursday December 15 from 4-8 p.m. at 450 Harrison Avenue. A great opportunity to help local artists and get some holiday shopping done! END_OF_DOCUMENT_TOKEN_TO_BE_REPLACED

Natalie Lemle was in to talk about ArtLifting, a program that aids homeless and disabled artists. Currently, 72 artists in 11 states are receiving 55% of all profits from your purchase of their artwork and photography. Click “more” to hear my chat with Natalie and to see work from one of the artists. END_OF_DOCUMENT_TOKEN_TO_BE_REPLACED

It’s no secret that Bostonians like to show their Patriot pride with tattoos. Who can forget the awesome guy who got that sweet Bill Belichick arm tattoo? Or the less-awesome guy who showed off his full-head Tom Brady helmet tattoo in his mugshot? END_OF_DOCUMENT_TOKEN_TO_BE_REPLACED