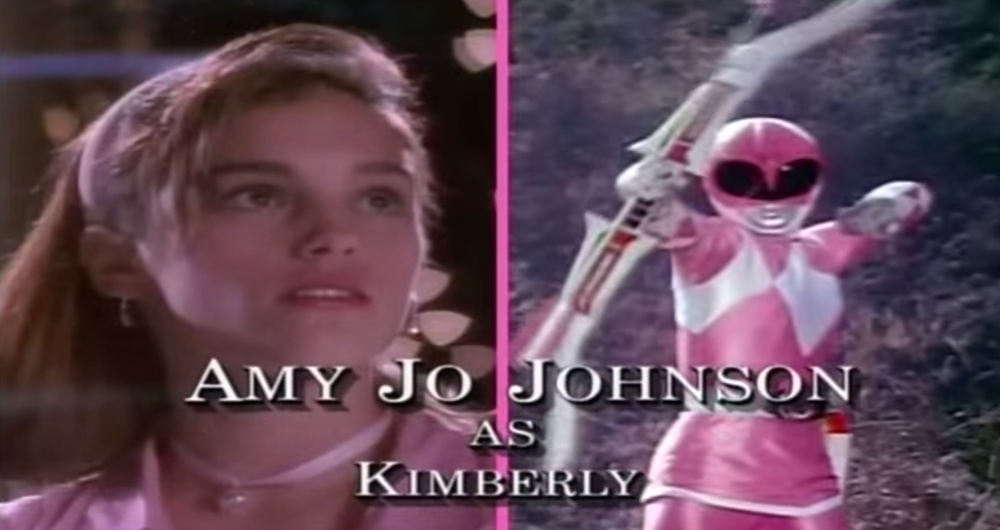 For many children of the ’90s, Amy Jo Johnson – better known as Kimberly the original pink Power Ranger – was their first TV star crush.

While her days of beating up Putty Patrollers are long gone, Johnson has since traded in her morpher and pink spandex for more grown-up gigs and is now a budding writer and director. The Cape Cod native is set to kick off this weekend’s Boston International Film Festival with a screening of her short film Lines on Thursday night.

We spoke with Johnson about making the transition to behind the camera, her thoughts on the upcoming Power Rangers reboot, and more.

I have to ask, what did you think about that gritty Power Rangers fan film that came out recently?

I loved it! I really liked it! It was a little crazy and over the top and definitely not for every audience. But, I don’t know, it was pretty cool. What did you think about it?

I thought it was amazing and I loved seeing James Van Der Beek in it.

I was flattered. I was like ‘this is so cool’ and the girl who played Kimberly was so hot and sexy. I was like, this is awesome!

Do you think the reboot should take on a similar dark tone to the fan film or should it stay true to its kid friendly roots?

I think there could be a really happy medium. It’d be nice for it to be mature for the hardcore fan base that’s grown up with the show and have it be not as campy and a bit more mature, more in the vein of what the other film was but not as crass and harsh and language and violence. What’s the equivalence of a movie that’s pretty awesome that parents like and kids like? I think there’s a bunch of them. Even The Hobbit or something, not that it’s like The Hobbit, it’s still mature but kids can watch. Or like Harry Potter.

You’re originally from Cape Cod and your latest short film Lines is set to kick off the Boston International Film Festival this week. Have you been to the city a lot over the years and how excited are you for the festival?

I’m so excited to have the film in there! A couple years ago, I had my first short film Bent, which was in the festival, so this is my second short film. I’m from Cape Cod, I never lived in Boston but my sister lived there for a long time. I love Boston, it’s an awesome city to visit and I love taking the ferry over. I have family in Provincetown and we always take the ferry.

Not only are you the lead in Lines, but you also wrote and directed the short. Where did the story come from and how personal of a film is it for you?

It’s an incredibly personal film. It’s actually a true story that happened to me about three years ago when I went to the doctor’s office to get a mole removed. It’s pretty much exactly what happened. I went in there and I left feeling really horrible about myself because the doctor was trying to convince me to do botox and lip fillers. I could have come out of there with a different face if I had been more vulnerable. Thank God I wasn’t. It was really quite a devastating thing for me. It was just really annoying so I decided to make a little short film about it.

Plastic surgery is such a huge part of Hollywood. What made you decide against going under the knife?

I lived in Los Angeles for about 15 years and when I turned 35, I left. I’m living in Canada right now. I moved to Montreal first and then I moved to Toronto. One of the reasons was I was looking around me at people in their 40’s and everybody has the same sort of face. I was like, this cannot become normal for me, I need to remove myself. So I did and I feel much happier up here living in Toronto. I think Boston is not like Los Angeles either so I think I’d be happy in Boston, but for some reason, Toronto seems to be the city for me right now. Especially becoming a filmmaker, I find it a very nurturing and amazing city. I’m doing my first feature this summer actually. Also, sort of transitioning to filmmaking out of acting has been really refreshing for the pressure an actor is put under to stay looking young. I just had to let that all go, it was too much.

You had a great Indiegogo campaign for your first feature film, The Space Between, which got a ton of support from the Power Rangers community. Is it crazy seeing how much these fans support your work outside of the show after all of these years?

It’s been absolutely incredible. I just feel like I could not be making this transition without the support of all those children who are now grown-ups in their late 20’s and early 30’s. I’ve done three Indiegogo campaigns, I did one for Lines as well. All three of them were successful because of the support I’m getting from mostly the people who watched Power Rangers 20 years ago. In my acting career, I’ve done Felicity and Flashpoint as well, so there’s a big fan base from there. But a lot of those people sort of came along because they’ve been following me throughout my whole career. I could not be doing this and making this transition without all that support.

You’re super vocal about indie films and doing work outside of that Hollywood model. Have you decided on how you’re going to release The Space Between?

Me and my producer Jessica Adam, she produced Lines as well with me, and we’re sort of trying to think outside of the box. I’ve never done a Comic Con tour before because I’ve been busy working on series or having a baby, I just haven’t embraced that yet or jumped into that. So we’re really contemplating and talking about doing some sort of grassroots, Comic Con tour with the film when it’s done. I think it could really reach the people who supported me making this film doing that. That won’t be until the middle of 2016 because we have to do our festival route first and then the theatrical route. I’m really excited to do a convention tour. It seems appropriate for whose helping me make this film.

You couldn’t have picked a better time to get into the Comic Con craze since superheroes are such a hot commodity right now.

Everything is timing in life, right? And this happens to be like a really great time to do it especially since its the 20th anniversary of the show, they are doing a reboot movie. This is now the time to jump into this convention thing. I never had the time before and it wasn’t even really on my radar. Then all of a sudden I’m discovering what it is and I’m like, oh my God, this is a really awesome way to jump into it. It’s the time to do it because it is so popular right now and there are so many superhero shows and stuff. The people who are helping me make this film are huge fans of my first job as a Power Ranger, so it’s all making sense.

END_OF_DOCUMENT_TOKEN_TO_BE_REPLACED

Enter to win a pair of tickets to attend The Hess Collection Seminar and Dinner as part of Boston Wine Festival 2018 at the Boston Harbor Hotel on Wednesday, March 14th. END_OF_DOCUMENT_TOKEN_TO_BE_REPLACED

I referred to it as the “best kept secret” in Boston arts for the holidays. END_OF_DOCUMENT_TOKEN_TO_BE_REPLACED

Boston’s arts scene shines at this time of year. END_OF_DOCUMENT_TOKEN_TO_BE_REPLACED

It’s so much more than a holiday show. END_OF_DOCUMENT_TOKEN_TO_BE_REPLACED

Rock for a cause this holiday season. END_OF_DOCUMENT_TOKEN_TO_BE_REPLACED

Get out and see a show this holiday season, and save some money when you do. END_OF_DOCUMENT_TOKEN_TO_BE_REPLACED

You can help give the gift of music to kids in need this holiday season. END_OF_DOCUMENT_TOKEN_TO_BE_REPLACED

Be honest: when’s the last time you attended a Gala? END_OF_DOCUMENT_TOKEN_TO_BE_REPLACED