This is Tatiana Maslany.

She’s the star of BBC America’s Orphan Black, and just scored an Emmy nomination for Lead Actress in a Drama Series.

What makes Maslany so special? She’s played almost a dozen characters on Orphan Black, a sci-fi series about a group of clone “sisters” fighting for their lives while unraveling their mysterious origins.

In many scenes, the only person Maslany has to play off of is herself. 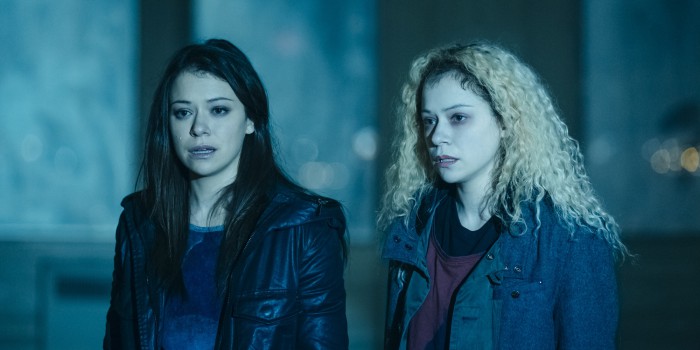 Though critics have praised her performance as one of the strongest on television, she wasn’t nominated for an Emmy the previous two years.

But the Academy of Television Arts & Sciences got their act together this year and gave Tatiana her due.

Fans were overjoyed by the news.

i’m going to get a tattoo sleeve of tatiana maslany’s face like, seven times

Even fellow Emmy nominees got in on the Tatiana lovefest.

And congrats to @tatianamaslany, whose otherworldly skill is surpassed only by the degree of difficulty of the job in which she employs it.

Last year at #Emmys @sethmeyers & I screamed at people that @tatianamaslany was snubbed. Today she was nominated. Coincidence? I THINK NOT.

Yes, there are other characters, but Maslany commands every scene of every episode. (Even when she plays a man!)

Maslany also credited show watchers for her nomination in comments to Variety, saying the show wouldn’t be as recognized if not for their ardent fandom.

“I didn’t even expect [the nomination] at all,” Maslany told Variety. “It’s super nice, and it feels like a nice thing for the show to get that kind of recognition, and for the fans — they’ve been so supportive and protective of us; it feels like a communal thing.”

Always a pleasure to have Boston.com’s Perry Eaton in studio for a chat. After we talked a bit about Pearl Jam at Fenway and Perry’s new podcast, he filled us in on Game of Thrones live and Narragansett’s new Bananagrams-themed brew. END_OF_DOCUMENT_TOKEN_TO_BE_REPLACED

No, not from afar, from the comfort of her couch. From the actual awards themselves. That’s where Meredith Goldstein was for the Oscars. She shared all the juicy, first-hand details with me. END_OF_DOCUMENT_TOKEN_TO_BE_REPLACED

It was wonderful having our good friend Meredith Goldstein back in studio this morning. She dug into the latest edition of Love Letters, which prompted us to play this song. And of course we had to discuss the Oscars. Make sure you’re following Meredith on Twitter, as she’ll be live-tweeting the awards this Sunday night. END_OF_DOCUMENT_TOKEN_TO_BE_REPLACED

Our first edition of TV Sets for 2016 might be better than every edition from 2015. END_OF_DOCUMENT_TOKEN_TO_BE_REPLACED