The voice of Matthew Ritchie carries a suede tenor, lilting then elongating on British vowels. He is riding from his home in New York City, a trip he describes as “rushing through the icy landscape towards Boston, just beautiful. Stunning, really. The coast, forest, almost like a special part of America reserved for Amtrak.”

Ritchie is arriving today to begin rehearsals for “The Long Count/The Long Game,” a musical performance piece that will cap his 18-month artist residency at the Institute of Contemporary Art. Premiered at the Brooklyn Academy of Music in 2009, the “Long Count” is a tapestry of Mayan eschatology. And Cincinnati baseball. 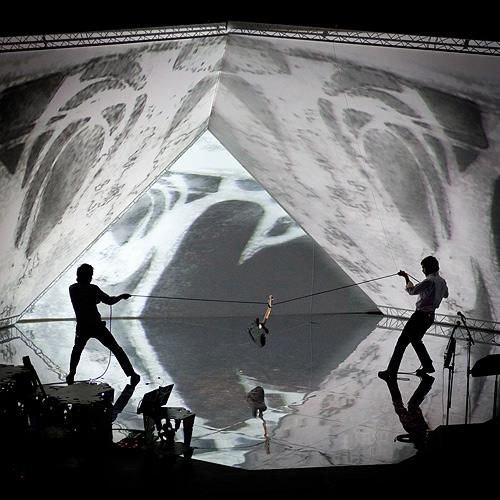 Cincinnati resonates for the project, as co-collaborators Aaron and Bryce Dessner (guitarists in The National) grew up with the Big Red Machine as their hometown heroes. Their musical gifts, Richie describes, as being “amazing strange.” Twins who “seem to function in multiple worlds at once,” they joke about “Bryce being the arty one, and Aaron’s the rock one. They generate a sensibility in the other; almost hops of a single foot.” Back to the Mayan mythology: the Popol Vuh tale is a set of hero twins that create a vast, millennial calendar called the Long Count. Now, it all makes sense?

The cosmology of creation and destruction is a fitting conclusion to the murals, installations, and performances emanating from the ICA waterfront. As Ritchie notes, “The Long Count” was consciously made the last element as “a nice summary for the whole project.” Ritchie has themed his work under the title “Remonstrance,” an expression he employs for lingering synapses of memory. This concept is visualized in the ICA entrance lobby as lines, swirls, and human touches like red handprints evoking Lascaux cave paintings, have spilled off the wall and onto the glass windows. 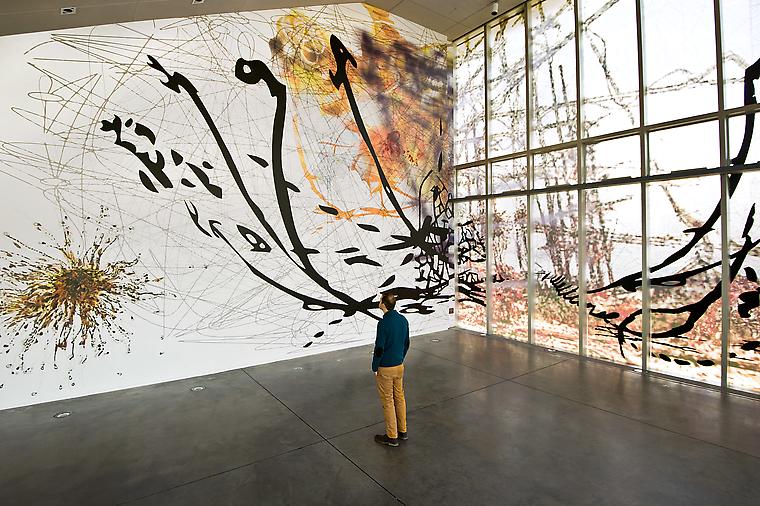 A similar effect is created in Dewey Square, as a Big Dig ventilation building has been bedecked with swaths of fractal orbs. This mural, Salt and Light (II), alludes to Winthrop’s vision for Boston as a beacon city, a spirit Ritchie sees as continued through the placing of the ICA on the waterfront. Boston has a sprawling vision, one that Ritchie sees as unique. New York he finds to be a merchant city, while Boston has been propelled by industry, religion, and politics, and the arts. 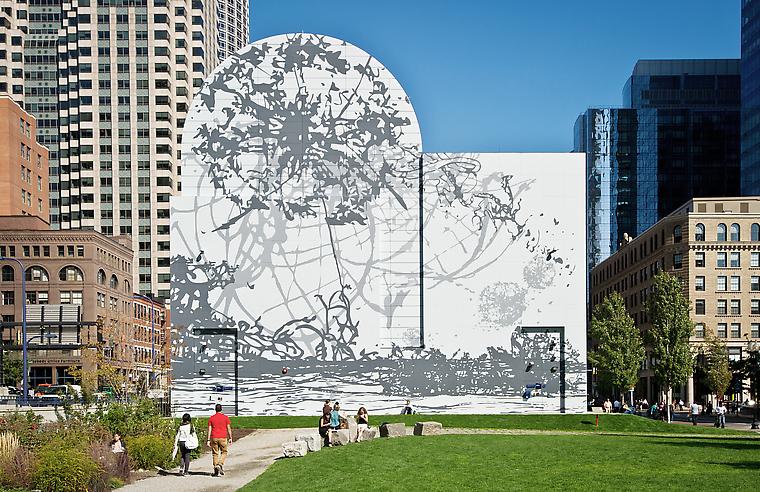 In his residency, Ritchie has posited art into the South Station commute and by mentoring teens at the ICA. Now, the process happens in reverse. “We’ve been slowly collapsing from the most public part on the greenway, then shrinking it down to the lobby, then upstairs to the most private part into the literal black box theater.” Ritchie shares how “The Long Count” will unfold in three movements, concluding with “musical ensemble, performers, and projection. The end is the most condensed; the fullest part in a black hole that has all collapsed together.”

Besides Bryce and Aaron Dessner, the ICA performance will feature Kelley Deal (whose sister, Kim, of The Breeders and formerly Pixies, was a second twin pairing in earlier iterations), Shara Worden (My Brightest Diamond, playing the role of Venus), and MIT professor Evan Ziporyn. With a sigh, Ritchie concedes, “There’s a lot of moving parts, but I think they are falling into place. Fingers crossed, you never know. The first project I did with Bryce, I had all this video set up. The piece started, but there was no video- the operator had fallen asleep. I had to go over and wake him up. So I’m really prepared for everything.”

These are big ideas and, Ritchie admits, he “hope[s] people will enjoy it. Hopefully. It’s experimental for live music.” Still, the process has been for Ritchie a “magical experience.” He closes by sharing the serendipitous workings “to get all these great people together. To have all the stars align with free schedules, which coincidentally is my birthday!”

In this way, Ritchie’s “The Long Count” is truly a story of ending and beginnings. All over again.

Enter to win tickets to see Trio Da Kali at The Villa Victoria Center of the Arts (Newton, MA) on April 10th. END_OF_DOCUMENT_TOKEN_TO_BE_REPLACED

END_OF_DOCUMENT_TOKEN_TO_BE_REPLACED

Enter to win tickets to Rhye at The Paradise on February 28th. END_OF_DOCUMENT_TOKEN_TO_BE_REPLACED

END_OF_DOCUMENT_TOKEN_TO_BE_REPLACED

Enter to win a pair of tickets to attend The Hess Collection Seminar and Dinner as part of Boston Wine Festival 2018 at the Boston Harbor Hotel on Wednesday, March 14th. END_OF_DOCUMENT_TOKEN_TO_BE_REPLACED

Her new album has been pushed back, but we have Kimbra’s new single for you. END_OF_DOCUMENT_TOKEN_TO_BE_REPLACED

The folk duo returns with a new record this week. END_OF_DOCUMENT_TOKEN_TO_BE_REPLACED

Now that we’re done looking back at 2017, let’s look ahead at 2018. END_OF_DOCUMENT_TOKEN_TO_BE_REPLACED