The Life and Career of Lourdine ‘Pat’ Patrick, Jazz Great and Father of Deval Patrick 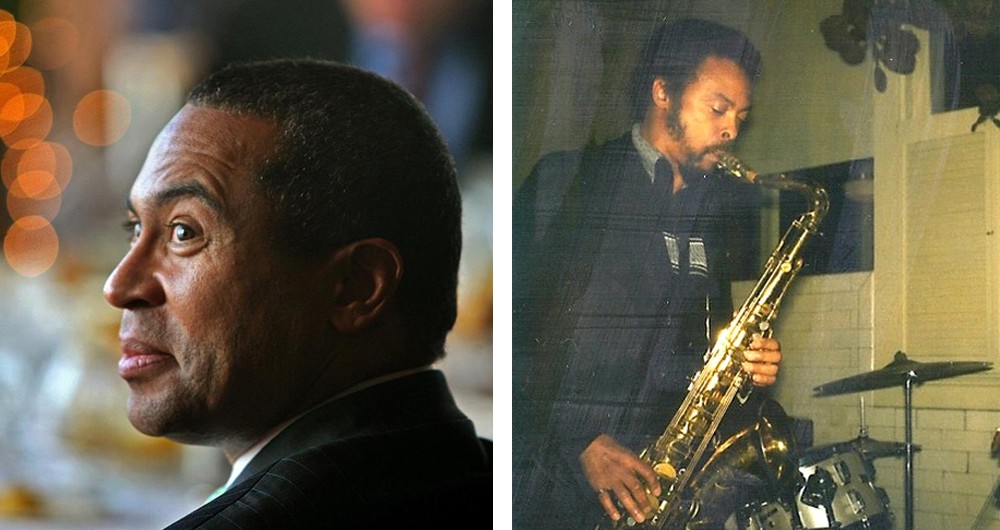 In a basement apartment on the south side of Chicago lived Lourdine “Pat” Patrick and his family, who in July, 1956, welcomed their son Deval into the world. As a musician at that time, Pat played clubs at night and tried to make ends meet. Although he loved his family, Pat’s commitment to music eventually separated him from his wife and kids.

Pat Patrick was born in East Moline, Illinois on Nov. 23, 1929 to Laverne Williams and Lourdine Patrick, a trumpet player. His father left when he was 12 to pursue a career in California, divorcing his mother. When Pat injured himself playing football, his mother brought him to Boston to receive treatment for 14 months in the state her grandson would one day govern. It was Pat’s desire to learn saxophone at Chicago’s DuSable High School that brought the family to the South Side.

Shortly after high school, Pat was invited to become a part of the Space Trio, a new band formed by Sonny Blount, a respected veteran of Chicago’s jazz scene. Pat would play both alto and baritone saxophone, both E-flat instruments with huge size differences. The baritone, or bari, is a massive woodwind instrument that, when sitting, can bump on the floor if the player isn’t careful. Its low tones are often mistaken for a euphonium or trombone, which join it in the rhythm section. Although it isn’t normally a lead instrument, the instrument has seen plenty of famous players, including jazz great Gerry Mulligan.

It was in October 1952 that Sonny Blount changed his name to Le Sony’r Ra, according to “From Sonny Blount to Sun Ra: The Chicago Years” by Robert L. Campbell, Christopher Trent, and Robert Pruter. The website, hosted by Clemson University, contains a huge wealth of information on the early years of Sun Ra and Pat Patrick’s work together. It is revealed on this site that Patrick, then a member of the Board of Musicians Local 208 Union, was having trouble finding work as a musician after his instruments were stolen the previous summer. By the next summer, Patrick would be enrolled at Florida A&M University. 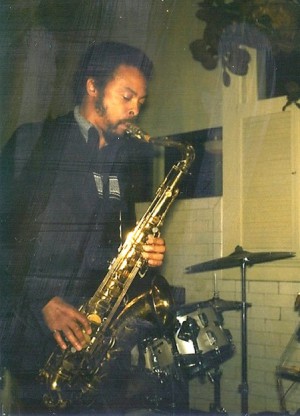 After traveling back and forth between school and playing with what at this point was called the Arkestra, Patrick and the band were featured in the short film, “The Cry of Jazz,” which showed the band as they played a history of various sub genres and styles. The film would eventually be released at the end of the decade, along with a soundtrack featuring the Arkestra. The next few years would see Sun Ra and his Arkestra become a staple of the Chicago jazz community.

Patrick made money playing various gigs with various other musicians during this time. He also developed a relationship with Emily Wintersmith, a high-schooler, starting in 1954.

In Deval Patrick’s 2011 autobiography “A Reason to Believe,” the governor would write “His greatest and first love was music,” and that “An ardent romance it wasn’t.”

In 1956, Deval joined the family, which had also celebrated the birth of a daughter, Rhonda, the year before.

The governor writes that the memories of his infancy and early childhood included “a stern father who always seemed to be observing us critically, and from a distance.”

A few months after his son was born, Pat was featured on the recording of “Down Pat,” credited to the Andrew Hill Combo. Here, Patrick leads the song and has a solo around the 1:40 mark.

He also copyrighted the Arkestra song “Two Tones” a few months later. This composition follows Pat Patrick as he solos up and down the register of the instrument, almost hitting the high pitch octaves that he would eventually break through and incorporate into the sound of Sun Ra.

In “Come Rain or Come Shine” from 1958, Patrick solos while accompanied by bass and drums. Sun Ra plays anomalous chords on an electric piano before a chorus of singers takes the song into the next portion, where Ra solos in what sounds like the other side of the room. The piano is very quiet and seemingly distant from the rest of the players, whose voices loudly return towards the end of the recording.

It was Christmas 1959 when Pat Patrick, after seeing venues move from live music to DJ nights, better serving teenagers of the time, hooked up with James Moody’s band, which was about to hit the road for New York City.

In an interview with NPR’s Morning Edition, Deval Patrick recites a passage from his autobiography, in which he describes the night his father left:

“As my mother, in tears, slumped in a chair, my father stormed out of the apartment, up the stairs to the street, and was gone. I chased after him — a four-year-old in despair — while he strolled away angrily, shouting at me, ‘Go home! Go home!’ About a block down, he lost his patience, turned suddenly in a rage, and slapped me. I sprawled out on the sidewalk, burning my palms on the pavement. From that position, I watched him walk away.”

Pat Patrick was featured on John Coltrane’s eighth studio album, “Africa/Brass,” released in November 1961. The widely popular record, which followed up “My Favorite Things,”  would be the first Coltrane would produce during his career at Impulse! Records.

One by one, members of the Arkestra would make the move to New York. In summer 1961, Sun Ra made the jump as well, and began to build the Arkestra again on the East Coast.

Deval and his sister would take the train a couple of times to visit their father. In his autobiography, the governor writes that his father, living in a tiny Manhattan studio, took the kids to see the top of the Empire State Building, but accidently bumped his son’s head on a railing while trying to lift him. During the New York World’s Fair, Deval and Rhonda saw their father play “with the Babatunde Olatunji band at the African Pavilion.” According to his book, this event would introduce Deval to the idea of experiencing the world.

“I didn’t appreciate until a few years ago just how great his range was,” the governor told Guy Raz during an NPR interview. “I didn’t fully appreciate his relationship with Thelonious Monk, the time he spent with Count Basie, his work with John Coltrane, and how central he was to their work.”

In his paper titled “Interstellar Low Ways: Pat Patrick and Free Jazz,” Seattle musician Evan Smith ties the influence of Patrick’s exposure to free jazz to the progression of Sun Ra and the Arkestra’s sound.

Starting in the early ’60s, the band churned out releases multiple times a year featuring innovative and experimental jazz. The first of these was “The Futuristic Sounds of Sun Ra,” which Smith points out is one of the first recordings featuring Patrick back in his chair. Smith uses “Space Jazz Reverie,” as an example of Pat’s progression. At around the two-minute mark, Patrick begins his unorthodox solo, which uses short melodic phrases intermixed with trills that stretch the range of the instrument. His playing goes between the tempo, often hitting the beat off-time. “As Patrick had only recently rejoined Sun Ra at this point,” Smith writes in his paper,  “I believe this solo was highly influential at the time.”

“Cosmic Chaos” on 1965’s The Heliocentric Worlds of Sun Ra, Vol. 2 shows a band fully exposed to free jazz ideas and styling. Pat’s playing throughout the piece takes the full register of the baritone saxophone and stretches it out farther than conventional pieces take it. He brings the instrument to life as it squeals and cries, especially when the song reaches the five-minute mark. The Pat Patrick that played in Chicago had become fully transformed into a progressive power player, shaping sounds and ideas into the heads of listeners and fellow musicians.

Deval and Rhonda would see their father when he toured through the city of Chicago, but for most of their childhood, as the governor told Raz on NPR, Pat lived in New York City. Sun Ra and His Arkestra would reach international fame in the next two decades, touring the world.

In early 1970, after Thelonious Monk’s tenor sax player Charlie Rouse left, Patrick was selected to play with the Monk Quartet for about five months. Tours with Monk took Patrick up and down the coast, including a five-day workshop in Boston.

The same year, Deval had begun to attend Milton Academy after receiving a scholarship. The governor writes in his autobiography about his father’s disapproval of the prep school and his fear of Deval losing his sense of heritage and self.

Nevertheless, Deval graduated from Milton Academy in 1974, an event which Pat had unexpectedly shown up to. Sally Jacobs of The Boston Globe wrote in March 2007 that Deval’s parents ended up fighting later that day. “I am thinking, this is supposed to be my day. . . . I just bailed,” said Governor Patrick. By the end of the decade, he was enrolled at Harvard Law School.

On Deval’s 25th birthday in 1981, Pat invited him to a show happening in Washington D.C. As he recalled on “Morning Edition,” Pat dedicated “I Can’t Get Started,” a song written by Ira Gershwin and popularized by Bob Hope, to his son. The song follows the viewpoint of a man who has mastered everything he started, except gaining the admiration of someone he loved.

“I gazed right back at him, knowing what he was trying to say: Life is too short to go on like this. Let’s find a way to come together,” Patrick told NPR.

Pat Patrick died from Leukemia a decade later, but because of the mass amount of material he had recorded with Sun Ra over the decades, new releases seem to pop up every year. Sun Ra and his Arkestra still has a huge fanbase, with concerts celebrating the decades-spanning library, held at music schools and concert halls across the world. Because there were so many releases, it isn’t that uncommon to find records featuring Pat Patrick performances in record shops across the Boston area.

When Deval was given the contents of his father’s storage locker well into his gubernatorial term, he discovered that letters sent by him and his sister as children were among Pat’s personal belongings. According to Deval, his father saved almost everything: recordings, flyers, notebooks, instruments. Most of his father’s belongings were donated to Berklee’s Africana Studies program and archive a couple of years ago.

And with his time as governor recently coming to a close, one must wonder if Deval will take the time to inspect and learn everything that his father’s collection has to offer. There’s no doubt that the collection must include unreleased material that not even the bootleg music collectors have gotten their hands on yet. Just like the 1964 World’s Fair gave young Deval a yearning to travel and explore the world, his father’s collection may have given him the same type of yearning, starting a journey rediscovering one of Jazz’s unrecognized greats.

Enter to win tickets to see Trio Da Kali at The Villa Victoria Center of the Arts (Newton, MA) on April 10th. END_OF_DOCUMENT_TOKEN_TO_BE_REPLACED

END_OF_DOCUMENT_TOKEN_TO_BE_REPLACED

Enter to win tickets to Rhye at The Paradise on February 28th. END_OF_DOCUMENT_TOKEN_TO_BE_REPLACED

Enter to win a pair of tickets to attend The Hess Collection Seminar and Dinner as part of Boston Wine Festival 2018 at the Boston Harbor Hotel on Wednesday, March 14th. END_OF_DOCUMENT_TOKEN_TO_BE_REPLACED

Her new album has been pushed back, but we have Kimbra’s new single for you. END_OF_DOCUMENT_TOKEN_TO_BE_REPLACED

The folk duo returns with a new record this week. END_OF_DOCUMENT_TOKEN_TO_BE_REPLACED

Now that we’re done looking back at 2017, let’s look ahead at 2018. END_OF_DOCUMENT_TOKEN_TO_BE_REPLACED

Our first Song of the Week for 2018. END_OF_DOCUMENT_TOKEN_TO_BE_REPLACED