The Knuckles: Sexy Rexy and Even More LeBron Hating

The Knuckles go global again this week, everyone. It’s not enough just to showcase the finest in Knuckleheadery here in the the United States. Since we’re always on the lookout for ways to add culture and different perspectives to The Knuckles, to do that sometimes you just have to look southward, all the way to a certain futbol tournament happening below the equator. The World Cup always delivers at least a handful of powerful knucklehead moments and this year’s edition, despite being less than a week old, already stands out. So with that, let’s get to this week’s Knuckles, international style.

This column could easily be named after the New York Jets coach and the point would be the same. The loudmouth Ryan simply can’t help himself, making one ridiculous remark after another after another year after year after year. This time around, while discussing the two Patriots castoffs in camp with the Jets, Jermaine Cunningham and Ras-I “R” Dowling, he decided to call out Pats coach Bill Belichick in his silly screed, remarking on how he doesn’t think “that one guy up in New England’s got all the answers.” When you stop laughing at the idea of Ryan actually thinking about something, remember that he frequently talks about Belichick, his comments usually unsolicited. Along with his frequent proclamations regarding the Jets Super Bowl chances (which are zero to pretty much everyone but him and Fireman Ed), Ryan loves to needle Belichick, who lost to Ryan and the Jets in a playoff game back in 2010 but still owns pretty much every advantage there is over his AFC East counterpart both past and present.

The Jets have gotten progressively worse over the course of Ryan’s tenure. His first two years, they reached the AFC Championship game, their performance on the field nearly matching their coach’s bluster. But they haven’t even made the playoffs since, with a combined record of 22-26 over the past three seasons. Given this futility, Ryan is probably coaching for his job this year and while the prospect of him getting fired and thus being out of our lives was once very appealing, now I kind of hope he coaches the Jets forever. There are few things in sports more fun than a buffoon like Ryan embarrassing himself pretty much every time he opens his mouth and Ryan is the gift that keeps on giving in that regard. So even though the Jets are basically already 7-9 or 8-8 and bound for an early vacation two and a half months before the 2014 NFL season even starts, cross your fingers that Big Rex, eternal knucklehead, hangs on another year or two. The entertainment value is too good to pass up. 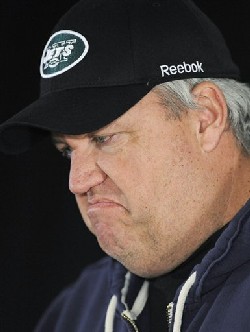 Two weeks in a row we have a repeat Knuckle winner and this one is well deserved. When the Spurs obliterated the Heat in three straight games to win their fifth championship culminating in Sunday night’s rout, the LeBron haters exploded.

It all started when he came out of the deciding game with 6:30 remaining and the Heat down by 18. Never mind that most every star player would be taken out around that point in a similar scenario, that hardly matters when it comes to LeBron, who was scorned in the aftermath despite posting a game high 31 points, 10 boards, five assists, two blocks and one turnover and averaging 28.2 points, 7.8 rebounds, 4.1 assists, 2.0 steals and shooting better than 57 percent from the floor for the series. He was still not tough enough, didn’t have enough heart, wasn’t a true champion, would never be Michael Jordan, blah blah blah blah blah.

Again, as stated in this space last week, I don’t like LeBron. He has taken having no self-awareness to the level of art form and he can still come off very smug and obnoxious from time to time, even after all this time since The Decision. But none of that has any bearing on what he is as a basketball player and he’s the best in there is. He single-handedly took on the Spurs in these Finals, and the Spurs represent the textbook definition of team basketball. The Spurs point differential was the greatest in Finals history; it would have been worse had LeBron not been there. The Heat were never more than a two-and-a-half man team throughout the series as Dwyane Wade deteriorated before our eyes, Chris Bosh was as inconsistent as ever and no one else contributed for more than a few minutes at a time.

Don’t want to root for LeBron? Your choice. Don’t like him or his personality? All the power to you. But to criticize him as a basketball player, to not recognize and acknowledge his talent and all that comes with it, from his unselfishness, to his innate ability to know exactly when to flip the switch and be the best player on the floor when necessary to the way he can control a game at both ends even without scoring, is so foolish, it renders anyone who feels that way as an ignorant, basketball knucklehead. And if you’re still not convinced, read this.

Lost in the gargantuan shadow cast by the United States’ 2-1  World Cup win over Ghana was the other game in their group, a clash between Portugal and Germany. The Germans are certainly better than Portugal but this one still read as a good game, one reason being the presence of Cristiano Ronaldo, one of the world’s best players, for the Portuguese.

Not so as it turned out. Germany blew the doors off, winning 4-0 in a game highlighted less by its offensive output than by the behavior of Portugal center fullback Pepe, who pulled what is a no doubter of a nominee for Knucklehead Play of the Year.

In the 37th minute, already down 2-0, Pepe leaned down and headbutted German striker Thomas Muller while Muller was sitting on the ground with the ball out of play. This move booked Pepe a red card, forcing his teammates to play a man down for the remainder of the match and earning himself an automatic suspension for Portugal’s next game. Oh by the way, that game will be against the U.S. on Sunday.

Regardless of what caused Pepe to feel he needed to go after Muller, that sort of behavior is the worst, most selfish kind. Just a total crap move with no justification whatsoever. And even though Portugal was already down and very much on its heels when the head butt happened, going down a man for any reason let alone such an egregious one, is inexcusable.

Thanks to Pepe’s knuckleheadedness, Team USA has that much more of a chance to beat Portugal, which will also be missing two other players due to injury, on Sunday, pretty much guaranteeing an advance to the knockout round and, perhaps more importantly, rendering next week’s game against Germany meaningless.

Hey, thanks for being a knucklehead, Pepe!