The ‘Jurassic World’ Trailer Is Here 2 Days Early, and It Looks Amazing

Two days before it was set to debut, the trailer for “Jurassic World,” the latest dino adventure flick from executive producer Steven Spielberg, hit YouTube. And despite our worst fears after the terribleness of 2001’s “Jurassic Park III,” it looks pretty flippin’ amazing.

Here’s the four things I’m most excited about after watching the trailer.

1. Chris Pratt!
The dude has proved time and time again he’s way more than schlubby Andy Dwyer on “Parks and Recreation” with killer performances in “Guardians of the Galaxy,” “The Lego Movie,” “Moneyball” and “Zero Dark Thirty.” And now he’ll have a chance to anchor yet another blockbuster franchise. Not bad for a dude who eats pens.

2. Jurassic Sea World!
The original “Jurassic Park” was sorely lacking in aquatic dinos, which to me are arguably more terrifying than any T-Rex. But the Sea World-esque amusement park in which a Great White shark is fed to some sort of prehistoric dino-croc made me audibly gasp.

3. Hybrid dinosaurs!
The big baddie in this film appears to be some sort of hyper-intelligent hybrid dinosaur cooked up in a lab by Bryce Dallas Howard’s sexy but misguided scientist. Keeping the dino out of the trailers is a good move, because after seeing how cool the other beasts looked in the trailer, I’m dying for more. I’m guessing it will look slightly better than the hybrid monsters of SyFy original movies. (Seriously, what the hell is a pteracuda?) 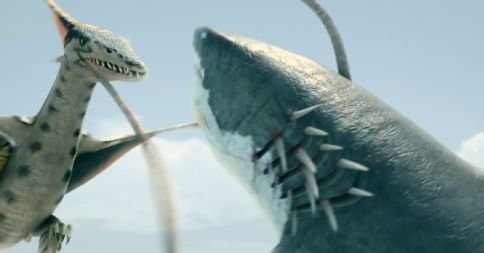 4. Steven Spielberg!
While the legendary director did not step behind the camera for this film, his involvement should be endorsement enough — as long as he didn’t executive produce another “Men in Black II.”

A decade of Wreck The Halls. END_OF_DOCUMENT_TOKEN_TO_BE_REPLACED

Golden Globe and Emmy nominee Benjamin Wallfisch is the composer responsible for the score of the hit movie IT. I talked to Ben about his approach to scoring the new version of this iconic story and his thoughts on film and music overall. Some very insightful commentary; listen in. END_OF_DOCUMENT_TOKEN_TO_BE_REPLACED

Rupert Gregson-Williams is an award-winning film composer. He just so happened to compose the score for this summer’s big blockbuster Wonder Woman. We talked about his beginnings in film scoring, film scores that move and inspire him and, of course, Wonder Woman. END_OF_DOCUMENT_TOKEN_TO_BE_REPLACED

Jeff Rapsis is a New England-based composer and performer. Lately, he’s been creating live musical scores for silent film screenings. I talked to him about his process and a few of his upcoming performances at The Capitol Theatre in Arlington and the Somerville Theatre. You can keep track of where else Jeff is scoring silent films here. END_OF_DOCUMENT_TOKEN_TO_BE_REPLACED

Leah Wellbaum from Slothrust brought her trusty six-string to Studio B and turned in the first RadioBDC Session of 2017. Check out her three songs and her chat with Julie Kramer, recorded live on February 28, 2017. END_OF_DOCUMENT_TOKEN_TO_BE_REPLACED

Planning on seeing Rogue One: A Star Wars Story when it opens this weekend? I joined Adam 12 to give you an idea of what to expect. But don’t worry, I didn’t give anything away. END_OF_DOCUMENT_TOKEN_TO_BE_REPLACED