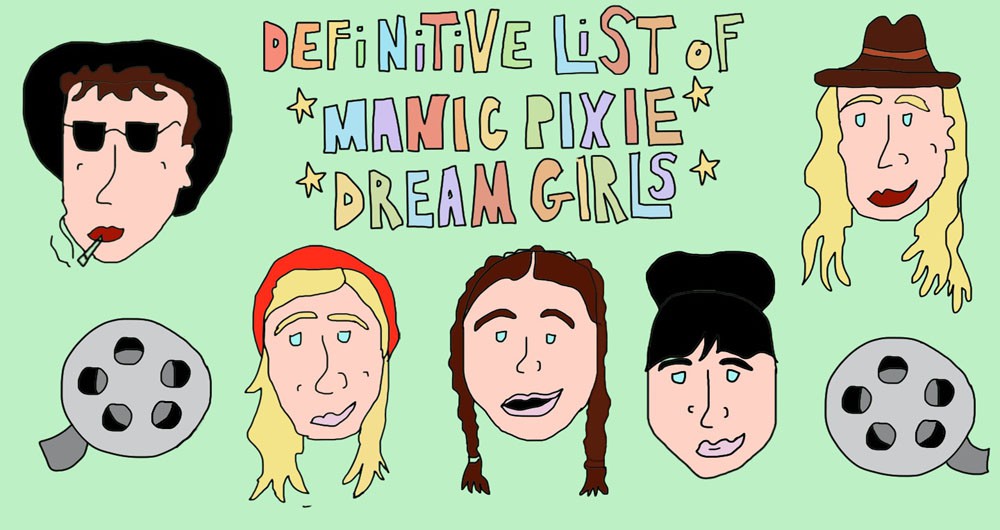 Ten years deep into the term’s origination, the “Manic Pixie Dream Girl” stereotype has become a well-known character trope, a hack plot shortcut a la the White Savior. The phrase has been popularized and eventually retracted by its creator Nathan Rabin, but it’s too late – the MPDG has not only become something close to the desk that lazy writers everywhere can reach for, it’s also become a bizarre ideal for a certain subset of young, hip females.

So get your hair bow-aligned and your Belle and Sebastian mixtape in hand. Here’s the worst, the best, and the mislabeled.

“I have played a ukulele.”

“Let’s go on an adventure!”

“My hairstyle can fix you!”

Even though the Crowe film itself is unmemorable, Dunst’s airline stewardess Claire –who lives to solve a still-hot, fresh-off-Legolas Orlando Bloom’s problems– ranks because her character originally inspired the MPDG term’s origination in 2005.

There’s no better example of the MDPG than Claire, who is nearly too quirky to function.

Important: PAULA DEEN IS IN THIS MOVIE.

It’s impossible to look at Natalie Portman in this movie without squealing over how cute she is, but that’s where her function ends. Constantly spewing lines that empower the protagonist, and act as little more than nonstop reinforcement of his cool originality, Portman’s Sam character is epileptic and adorable. And that’s about it.

Zooey Deschanel in 500 Days of Summer

Mary Elizabeth Winstead in Scott Pilgrim vs. The World

There’s no doubt that the Ramona Flowers character is a damsel in distress, cleverly disguised as a “weird girl”: she’s there to change the life of Scott Pilgrim. In spite of her inherent coolness, the film makes it clear that Ramona isn’t going to be the one to save herself, but Scott finds new purpose with her cool girl depth and constant change of hair color. That’s all it takes to date a shleppy 22-year-old Canadian, guys!

On its surface, this seems like just another white man in his 20’s finding himself through the magic of a polka-dot clad vagina. Great. However, Kazan’s story makes this an interesting study – this 2012 film presents the audience with a one-dimensional MPDG and singlehandedly dissects it and builds her into a fully realized character throughout the course of the movie. Sure, the Paul Dano protagonist tries to force his own fantasy on her to keep her in check. But Ruby ultimately insists on being her own person, even if that person was willed to life by some sort of lonely novelist magic in the first act.

This one, it would appear, is a common misconception. Allen went on the record repeatedly as saying that the Annie character was largely based on what he knew of Keaton himself– a fact the actress attested to. Sure, Annie changed Alvy’s perspective on almost everything, but she was flawed and based in reality.

Audrey was a quintessential manic pixie before the term even existed, and it’s evident in some of her most famous works. Whether Holly Golightly is showing writer Paul what New York is all about in Breakfast, Sabrina is transforming to impress the Larrabee brothers, or Ann is giving journalist Joe Bradley the scoop of his life in Roman Holiday, her lovable portrayals of sometimes complicated, always flighty characters is classic MPDG.

Does it make any of these films less fun to watch? Not necessarily, but it’s a staple trope of its time.

Sweet teenage groupie Penny Lane (played by Kate Hudson) won audiences over when Crowe’s film was released in 2000. But the writer ultimately demonstrated a downward spiral in quality work that would end in his most recent release, 2011’s We Bought a Zoo.

Upon further inspection, Penny is a character who is defined by the men around her – first by a band, and then by leading man and awkward boy journalist William. Sure, she’s addicted to quaaludes, but it’s nothing the love of a teenager can’t solve. Crowe has half of the plot to thank Penny for, and doesn’t give her a satisfactory background in return.

Belle (Paige O’Hara) in Beauty and the Beast

Not the first example you’d think of, but the case is strong. If we’re defining the MPDG as a female character whose ultimate narrative goal is to give dimension to a central male character, what could be more iconic of that than her function (i.e. true love’s kiss) actually changing him from an unidentified he-beast into an Aryan prince? The defense rests.

Charlize Theron in A Million Ways to Die in the West

As Theron no doubt glows from her recent Razzie nomination for the same film, cartoon mogul Seth MacFarlane attempted to pen his first vehicle this past summer with flop A Million Ways to Die in the West. Theron’s character Anna, is “so unlike the other girls” and is, for some reason, the only other character in this world that shares MacFarlane’s 2014 perspective on an 1800s world. And boy can she sling a gun! Save it for your fan fic, Peter Griffin.

Yvonne Strahovski in I, Frankenstein

OK, this one is just straight up lazy. Adapted from the comic book of the same name, I, Frankenstein is an across-the-board failure following character Adam Frankenstein (why?) as he traverses the war between gargoyles and demons (what?) with the plot-furthering help of a sex bomb scientist named Terra (how?). Terra appears only to show villain Bill Nighy the vague science she is creating, and there’s a scene where we are led to believe that Terra and Adam fall in love when she stitches a creepy wound on his dead flesh with an unsterilized needle.

Scarlett Johansson in Her

Scarlett Johansson’s voicing of Samantha, the computer program everyman Joaquin Phoenix falls in love with in Her is a seemingly self-aware depiction of the MPDG trope, because the audience knows it’s doomed from the start. Samantha begins to discover herself as a unique entity as the plot progresses, expressing curiosity and choosing to explore. Though her presence in the narrative is the primary force that shapes and changes its male protagonist, Samantha makes enough changes in her own digital life to justify herself.

There’s no greater regressive male fantasy (that you secretly admit to watching over and over) than Palahniuk’s Fight Club, brought to the screen by David Fincher in 1999. Helena Bonham Carter plays the female lead of Marla Singer, the death-obsessed addict who quirks around, attending group therapy for things she’s not suffering from and becoming the driving force behind Tyler Durden’s self-imposed destruction. Is there any other point to her character, other than to further the plot for Norton and Pitt? Not really, making her more of a manic pixie goth prop than anything else. Cool hair, though.

Every Woman Don Draper Cheats on His Wives With, the First Time They Have Sex

In a TV era marked by dark, troubled protagonists, Mad Men often used the gender norms of the time period to demonstrate the inner turmoil of everyone’s favorite advertising exec. This culminated in too many affairs to count, and though many of the show’s fierce female characters came equipped with a well-developed backstory and temperament, Don’s first roll in the hay with his newest lady always connected to the MPDG fantasy.

The second time, we realize something else – she’s harbored feelings for him forever (what’s up Allison?), she’s also married (what’s up Bobbie?), she was taking it less serious than he was (what’s up Midge?). That first time, though? She’s totally gonna be the one to “fix” him.

(For every woman Don hooked up with on the series, The Daily Beast has a terrifyingly comprehensive list here.)

Anna and April on “Gilmore Girls”

Kind of a deep cut, but an important one nonetheless – GG was famous for introducing characters who were too cool to deny. Jury’s out on whether Anna, who held out on poor backwards baseball cap Luke about his daughter April for thirteen years, would actually go for him. Since “absentee father” points to a major jumping of the shark for Gilmore Girls, there’s no denying that the introduction of Luke’s daughter was a failed experiment in character development.

You can check out some other hotly debated lists of MPDGs here and here.

Golden Globe and Emmy nominee Benjamin Wallfisch is the composer responsible for the score of the hit movie IT. I talked to Ben about his approach to scoring the new version of this iconic story and his thoughts on film and music overall. Some very insightful commentary; listen in. END_OF_DOCUMENT_TOKEN_TO_BE_REPLACED

Rupert Gregson-Williams is an award-winning film composer. He just so happened to compose the score for this summer’s big blockbuster Wonder Woman. We talked about his beginnings in film scoring, film scores that move and inspire him and, of course, Wonder Woman. END_OF_DOCUMENT_TOKEN_TO_BE_REPLACED

Jeff Rapsis is a New England-based composer and performer. Lately, he’s been creating live musical scores for silent film screenings. I talked to him about his process and a few of his upcoming performances at The Capitol Theatre in Arlington and the Somerville Theatre. You can keep track of where else Jeff is scoring silent films here. END_OF_DOCUMENT_TOKEN_TO_BE_REPLACED

Planning on seeing Rogue One: A Star Wars Story when it opens this weekend? I joined Adam 12 to give you an idea of what to expect. But don’t worry, I didn’t give anything away. END_OF_DOCUMENT_TOKEN_TO_BE_REPLACED

Always a pleasure to have Boston.com’s Perry Eaton in studio for a chat. After we talked a bit about Pearl Jam at Fenway and Perry’s new podcast, he filled us in on Game of Thrones live and Narragansett’s new Bananagrams-themed brew. END_OF_DOCUMENT_TOKEN_TO_BE_REPLACED