The Coffee Buster: Boston’s Caffeine Hero of the Early ’90s 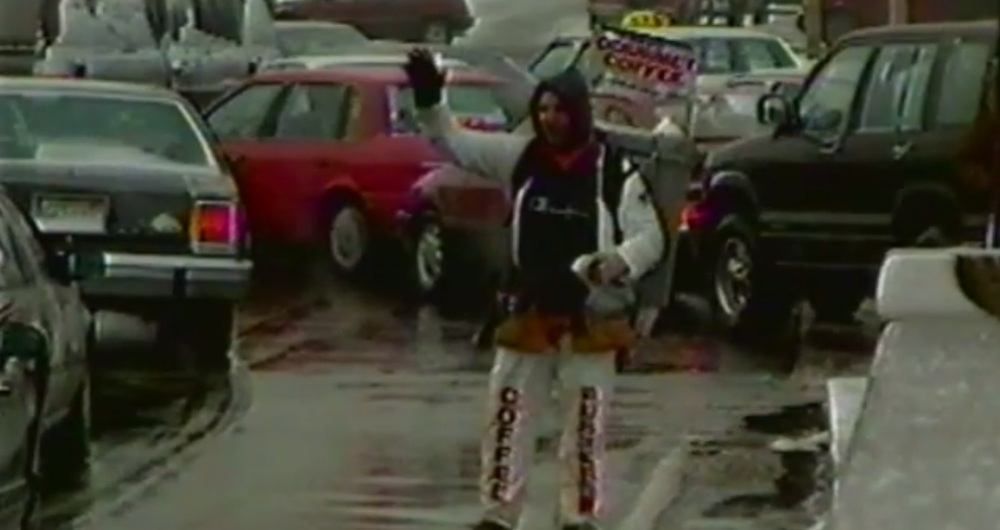 Every city has its characters. People who, by their personality and actions, stand out among the crowds. While some of these characters are known for always being in the same spots, such as Spare Change Guy or the late Mr. Butch, there are those who are known for their effort to put a smile on the faces of those who happen to pass by. In the recent past, Boston has had Keytar Bear, but back in 1993, there was Chris Costonis — the Coffee Buster.

Costonis’ identifiable features did not include any sort of animal costume or dreadlocks. His main uniform consisted of a 56-pound backpack resembling the proton packs worn by the Ghostbusters, except his pack was full of coffee.

No one called the Coffee Buster. Instead, many commuters would pass him on their way downtown. As traffic naturally slowed at the tolls on the East Boston side of the Callahan and Sumner Tunnels, Costonis could be seen running from car to car selling fresh coffee to his patrons, most of whom were still adjusting their eyes to the light on the dawn.

According to a Herald article in 1993 by Harvey Dickson, Costonis would begin serving on the highway around 6:20 a.m., packing it in around 9:15 a.m.

In 1994, NBC’s Mike Leonard featured the Coffee Buster in a report for Nightside. The video includes Leonard, who, after saying “Coffee Buster,” gives a hilariously predictable delivery of “Sorry, my mistake. This is Boston, where a ‘buster’ is a ‘busta.’”

Costonis is shown dancing, swinging his pack around, and having conversations with commuters, yelling “Hot coffee, right here!”

“We come out of the cup, lefty, we pour, righty,” he says as he pulls out a cup and fills it with coffee from a hose he grabs from the back. “We get the cup, we release this,” he says as he puts the coffee-hose behind him and pulls out another hose, explaining, “We come back in one motion with the milk-a!”

An early 1990s television report for now-defunct WLVI (today’s 7News/CW56,) also shows Costonis dancing around the tolls, this time to the theme from “Ghost Busters.” He says that what he does “to come out here every day, is I almost suit up for, like, a competition.” Unsurprisingly, carrying that much coffee means that one has to be athletic to maneuver around. But the fact that he was athletic came as no surprise to North Shore high school hockey fans.

Way before he was the Coffee Buster, Costonis grew up in Winthrop. When the Winthrop Transcript ranked the most athletic plays in Winthrop High School history last Summer, Costonis made the sixth spot. In 1972 at the Lynn Arena, while playing on his school’s varsity hockey team, Costonis scored three goals in 29 seconds, a North Shore Hockey League record.

Costonis told the Herald that after high school, he worked in real estate, but because of the Boston-area real estate depression of the late 1980s and early 1990s, he was forced to find a supplemental income. By the end of 1991, he had taken his spot on Route 1A in East Boston.

A press release dated April 20, 1995 reveals that by this time Costonis had become somewhat of a mascot as the “Green Mountain Coffee Buster,” making appearances at local coffee shops and retailers throughout New England and as far away as Illinois.

From the press release, “The Coffee Buster has evolved to serving customers “the world’s fastest cup of coffee” (5 seconds for black, 7 seconds with cream) dispensed from a backpack full of freshly brewed piping-hot coffee. The Green Mountain Coffee Buster and his sales routine have attracted the attention of National Public Radio, CNN, National Geographic, and a variety of Boston radio and TV stations.”

But that’s just about where the legend stops.

Costonis left the public eye and put the Coffee Buster behind him. While he played up the persona around the time the Internet started to get popular, there’s still almost no public information about him other than what’s referenced above. Perhaps he wants it that way, but we can still wonder.

One thing is for certain– Costonis was passionate. He took a bad situation and improvised a way to earn a supplemental income, providing for his family while also providing fresh, hot coffee in a convenient way for his neighbors. Those commuters who, for a few years, got their coffee from Costonis in traffic, probably haven’t forgotten him. He was doing it himself. He was personable. He was a local guy with a good idea. He was the Coffee Buster.

Enter to win a pair of tickets to attend The Hess Collection Seminar and Dinner as part of Boston Wine Festival 2018 at the Boston Harbor Hotel on Wednesday, March 14th. END_OF_DOCUMENT_TOKEN_TO_BE_REPLACED

We ate vegan blueberry cake and it was amazing. END_OF_DOCUMENT_TOKEN_TO_BE_REPLACED

Dan Croll is a great musician and an even better person. END_OF_DOCUMENT_TOKEN_TO_BE_REPLACED

We kicked off the weekend with a visit from Sasha Purpura, Executive Director of Food For Free. Sasha was back to promote next month’s Craft for a Cause event, a craft beer festival celebrating the Central Square Cultural District. END_OF_DOCUMENT_TOKEN_TO_BE_REPLACED

Summer is the hungriest time of the year. Millions of kids rely on school meals, but in summer, the meals disappear. HGTV’s Taniya Nayak was in studio this morning to talk about Taste of the Nation this coming Tuesday, June 6, which benefits Share Our Strength’s #NoKidHungry initiative. Click here to get your tickets. END_OF_DOCUMENT_TOKEN_TO_BE_REPLACED

Community Servings provides nutritious meals to individuals and families living with a variety of illnesses. Stephanie Carrigg was in studio this morning to talk about this year’s Meals4Moms program, where your contribution not only helps feed moms in need, but nets you some great goodies for a mom in your life. END_OF_DOCUMENT_TOKEN_TO_BE_REPLACED

Continuing our month-long series spotlighting videos we hope will inspire you think. END_OF_DOCUMENT_TOKEN_TO_BE_REPLACED

The first in a month-long series focusing on new songs that go a little deeper. END_OF_DOCUMENT_TOKEN_TO_BE_REPLACED