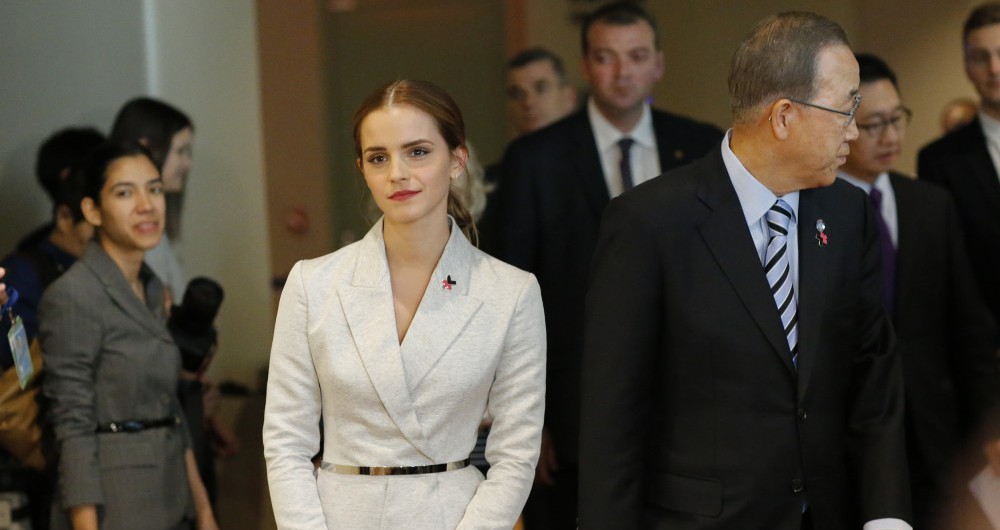 Emma Watson has evolved from acting in the magical world of Harry Potter to become one of the most prominent voices of gender equality. Last September, the British actor gave an inspiring speech at the United Nations launching the HeForShe campaign. And yesterday, in celebration of International Women’s Day, Watson gave a live Facebook Q&A interview, continuing to advocate for gender equality.

In her hour-long conversation she addressed many facets of the movement, but made clear that it isn’t about men “saving” women.

She explained that when she spoke at the UN, she felt that “the impact of gender inequality and how it’s actually been affecting men hasn’t really been addressed” and that was a clear message she wanted to communicate.

But it’s equally important for women to acknowledge and feel comfortable enough to admit this is a problem.

“A lot of the criticism I’ve ever had in my life, some of the harshest moments of criticism have been comments from other women. It’s not just enough to ask men to come in and support us. We really need to support each other.”

Watson is not ignorant of how privileged her life has been, but she still has an undeniable passion and determination to have an impact.

“I’ve been incredibly lucky. I really have been supported and had access to a lot of opportunities that women in other countries probably aren’t. I would never complain about my personal situation. Surely, it is therefore my responsibility to make sure other women have access to same privileges that I have. Surely, it would be bad if I wasn’t doing this, making sure that what I have been lucky enough to receive in my life is extended to others.”

The word “feminism” can be confusing to some, but people are coming back to what it originally means. Watson says “we just want to be included.”

“If you stand for equality,” she said, “then you’re a feminist.”

Chef David Vargas, Owner of Vida Cantina in Portsmouth, NH is hosting a one-time-only event that he created to raise money for foundations supporting immigrant workers and their families. He joined me in studio with Chef Daniel Bojorquez of La Brasa in Somerville to talk about Si Se Puede – Yes We Can Dinner on Sunday, April 2. END_OF_DOCUMENT_TOKEN_TO_BE_REPLACED

While many have called out Davis since a video of her refusing to issue a marriage license to Rowan County residents David Moore and David Ermold went viral in July, relationship columnist and gay activist Dan Savage went a step further on MSNBC Tuesday night, saying that “this is about someone hypocritcally looking to cash in”. He added: “And she is a hypocrite.” END_OF_DOCUMENT_TOKEN_TO_BE_REPLACED

END_OF_DOCUMENT_TOKEN_TO_BE_REPLACED

David Filipov was part of the team that headed up the Boston Globe/Fox25 Olympic Debate last night. He offered his takeaways and analysis after an update on the latest exchange between Governor Baker and the USOC. All in all, our conversation does a pretty good job of getting you up-to-speed on all things Boston2024. END_OF_DOCUMENT_TOKEN_TO_BE_REPLACED