The Bandwagoner: Who Will Be NFL MVP if Tom Brady Can’t? 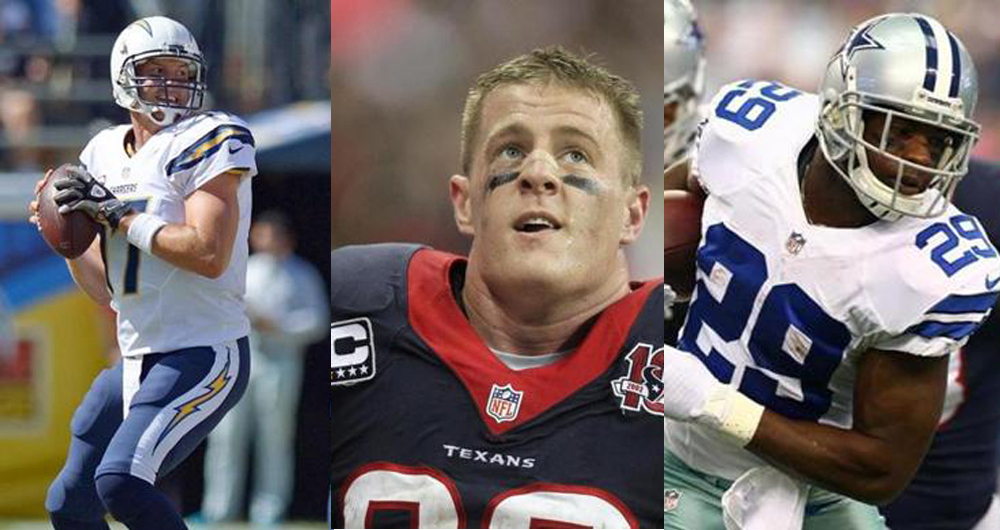 Welcome to The Bandwagoner, a weekly series in which we give a primer on recent sports stories for those unfamiliar with anything outside of Boston. Our goal is to make sure that you’re not studying your iPhone as much when that one person in your group says those fatal words, “So did you guys see that game?”

This week, we’re catching up on the NFL Most Valuable Player award race.

“There’s a thinkpiece already written about that,” my roommate said as he leaned over my shoulder to check out the working headline for this article.

It was some blurb about how the NFL has really, uh, not had a great year. The worst part is, it could have been about any number of things. Concussions. Domestic violence. His Holiness Tom Brady raising over $3 million for charity in a flag football game for Best Buddies and somehow picking Guy Fieri to cater the event. (I was there. In no way, shape, or form did those breaded monstrosities resemble sweet and sour chicken, Mr. Fieri.)

Whether the NFL should even exist or not is in question every week. For now, it does, and we enjoy it and report on it, and take our other Sunday plans out to pasture, but make no mistake: it’s got a ton of issues. But hell, here we go.

After this weekend, NFL awards voters have a few tough decisions to make — the first of which probably have to do with finding their significant others compensation for their weekly . This year’s MVP race is shaping up to be one for the eBooks, what with San Diego Chargers quarterback* Phillip Rivers, Dallas Cowboys running back** DeMarco Murray, and Houston Texans defensive lineman*** J.J. Watt posting incredible stat lines on top of the usual amount of Internet-crafted hysteria and celebratory GIFs.

*The go-to characteristic for every high school movie villain ever.

** The position of Bo Jackson, the most dominant video game character of all time.

*** The position that Dwayne “The Rock” Johnson played in college, and presumably where he learned to cook.

Rivers has had an incredible season (with nonsensical hyperlinks, at that), and has just extended his streak of positing a passer rating* of over 120 for five straight games, breaking the record held by Johnny Unitas and Kurt Warner, and Murray has so many rushing yards** by himself, that if he were his own team, he’d be in fourth place in the entire league. That is insane.

*A mystical rating that fluctuates according to the whims of statisticians, Tolkein warlocks, and ESPN’s John Clayton. Just nod like you understand it if asked what your favorite quarterback’s passer rating is. If you do actually understand how it works, please call me.

** The amount of yards run by the running back on the ground during a game. Much easier to calculate than passer rating. And still, if you actually understand how it works, please call me.

But J.J. Watt has this graph. 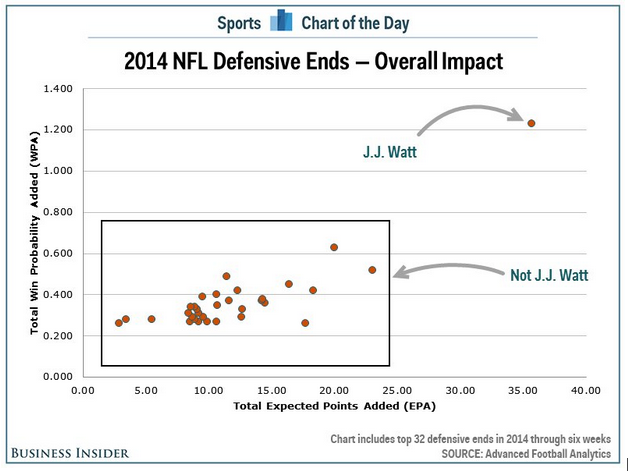 If you’re like me, you looked at that graph, wondered why all graphs can’t point out the most important information with wisecracking arrows, and said, “That looks impressive, but I still have no idea what that means.”

Because it doesn’t matter. Guys, J.J. Watt is a goddamn freak of nature. Many press outlets have made their case for why he should be the first defensive player to win MVP since Lawrence Taylor*. But to simplify: already this season, Watt has pressured** the quarterback 41 times, leading the league by 19. He’s scored three touchdowns — again, he’s a defensive lineman, meaning not even your “Madden” game can properly simulate this  — and to top it off, he actually looks like what Boston College parents think their sons look like.

*Read this, and tell me that Draft Day wouldn’t be like, six or seven times better. What a crazy dude.

**Not a sack, which is when the quarterback is tackled before throwing the ball behind the line of scrimmage, but when the quarterback is hurried into making the throw before he’s ready. Think of this as J.J. Watt being an especially tantalizing trailer for the newest “Walking Dead” season, and you as a writer with an impending deadline. Something like that.

Yet, he probably won’t win the MVP, because quarterbacks and running backs score the points, and picking the “Houston Texans” defense in your friends’ fantasy football* league still won’t be enough to give people what they really Watt.

*The impetus for FX’s worst original programming since the second season of “Wilfred.”

Enter to win a pair of tickets to attend The Hess Collection Seminar and Dinner as part of Boston Wine Festival 2018 at the Boston Harbor Hotel on Wednesday, March 14th. END_OF_DOCUMENT_TOKEN_TO_BE_REPLACED

The Black and Gold continue their run tonight at TD Garden. END_OF_DOCUMENT_TOKEN_TO_BE_REPLACED

Who will make the Class of 2018? END_OF_DOCUMENT_TOKEN_TO_BE_REPLACED

It’s been awhile since we talked Black and Gold. END_OF_DOCUMENT_TOKEN_TO_BE_REPLACED

You’re going to wish you were in the Northern Alps. END_OF_DOCUMENT_TOKEN_TO_BE_REPLACED