The Bandwagoner: Let’s Not Let Everyone Escape From Ray Rice Situation 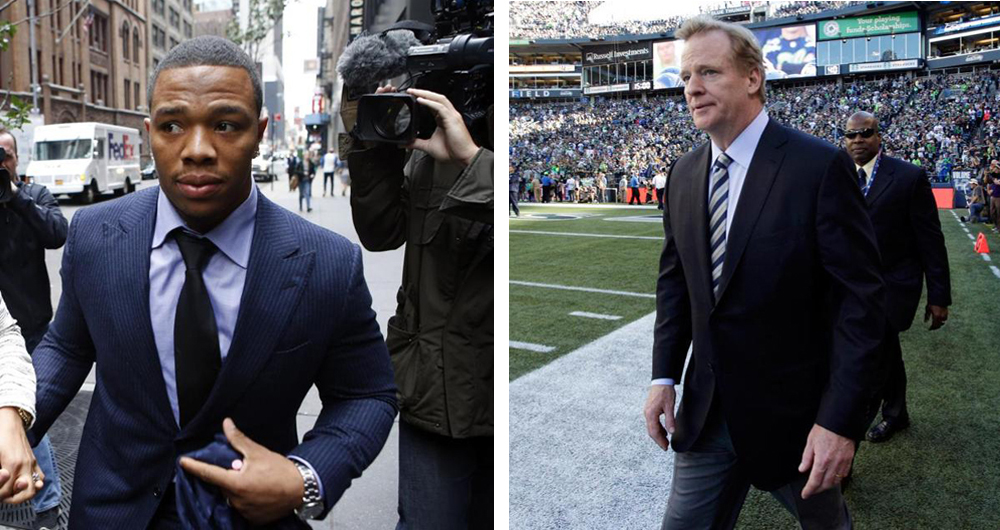 {“data”:[{“type”:”text”,”data”:{“text”:”_Welcome to The Bandwagoner, a weekly series in which we give a primer on recent sports stories for those unfamiliar with sports, or anything outside of Boston. Our goal is to make sure that you’re not studying your iPhone as much when that one person in your group says those fatal words, “So did you guys see that game?”_ \n\n”}},{“type”:”html”,”data”:{“text”:”“}},{“type”:”text”,”data”:{“text”:”_This week, we look at the path of public outrage in regards to the Ray Rice case._\n\nWhen you woke up this Tuesday morning, I’m 90 percent sure that your first thought was, “You know, I haven’t heard about the Ray Rice case from the perspective of a college student currently attending a private liberal university, and I _need some of that_.”\n\nOh, you were? Well, I’m here and ready to rock your world. \\(No footnotes this time.\\)\n\nWe’ve established many times over that Mr. Rice physically assaulted his wife, Janay. We saw that he punched her in the face in video obtained by TMZ \\-\\- breaker of the most important sports stories in the past few years, yes \\-\\- but we already knew the details of what happened inside the elevator \\(The NFL, allegedly, didn’t once even conceive of what may have incapacitated Janay Rice to the point of being dragged out of the doors\\). Once the video released, the NFL claimed that it had seen the video for the first time along with the rest of us, and changed Mr. Rice’s suspension. That extra suspension was recently overturned.\n\nLet’s try to chart this out. First, we were angry at Ray Rice for the act itself. Then, we were angry at the league for failing to suspend him for more than two games. Then, we were angry at Ray Rice again once the video came out. Then, after the NFL suspended Ray Rice again, we were angry that the NFL appeared to only take the assault seriously once it became more of a public issue. Then, after [the greatest \”South Park\” episode in generations](http://www.washingtonpost.com/news/morning\\-mix/wp/2014/09/25/south\\-parks\\-epic\\-satire\\-on\\-dan\\-snyder\\-roger\\-goodell\\-and\\-the\\-nfl/), we were even angrier at the NFL because it became plausible that this type of alleged domestic violence cover\\-up had been a common practice for decades. Finally, we were even _even_ angrier at the NFL for somehow turning Ray Rice into the victim for inappropriately attaching another suspension despite no new evidence.\n”}},{“type”:”image”,”data”:{“file”:{“url”:”http://www.bdcwire.com/wp-content/uploads/2014/12/rogerbot2.0.gif”,”full”:”http://www.bdcwire.com/wp-content/uploads/2014/12/rogerbot2.0.gif”},”text”:””}},{“type”:”text”,”data”:{“text”:”It’s that last failure of the NFL \\-\\- the failure to establish that they had never seen the video before it went public \\-\\- which crystallizes our current position. What may have been intended as an, “I’m going to get this right,” move by Goodell and the owners actually turned out to be a power\\-grab that infringed on Rice’s rights afforded by the NFL Players Union.\n\nWe wish this story never happened. Or rather, we wish that domestic violence in the NFL hasn’t been [happening](http://fivethirtyeight.com/datalab/the\\-rate\\-of\\-domestic\\-violence\\-arrests\\-among\\-nfl\\-players/) continuously for decades. But since it did, and since it’s taken so many twists and turns, I think it makes sense to try and chart how we need to make sure that nobody is getting out of this situation truly intact. And that’s a good thing.\n\nEven forgetting the terrible implication that the NFL itself [maintains](http://www.nytimes.com/2014/11/18/sports/wives\\-in\\-domestic\\-abuse\\-cases\\-say\\-nfl\\-culture\\-made\\-them\\-feel\\-trapped.html) a systematic, misogynistic environment \\-\\- and potentially even encourages it \\-\\-players now commit such acts in a social media\\-driven world that is constantly fluctuating with each and every revelation of a certain case. This is how things get lost and forgotten, and how Ray Rice can suddenly appear as the victim again. Ray Rice wants to re\\-sign [soon](http://espn.go.com/nfl/story/\\_/id/11966953/ray\\-rice\\-hopes\\-second\\-chance\\-nfl\\-team), after all. And he might.\n\nI can’t offer any new insight into whether or not Ray Rice will actually be signed. This is a weekly column with few connections and even fewer proper citations. But I can say that as much as public opinion seems to fluctuate so often, I believe it’s that same public opinion that will not let anybody in this situation [escape](http://www.nytimes.com/2014/12/01/sports/football/theres\\-no\\-escaping\\-the\\-scandal\\-wherever\\-ray\\-rice\\-lands.html) with intact reputations. \n\nIt may not do anything. All of the Ravens staff accused of conspiring to keep the story a secret will probably remain on the team. But I hope that their involvement won’t be forgotten amidst other, easier\\-to\\-hate figures. There are [others](http://www.boston.com/sports/baseball/redsox/2014/04/28/was\\-tom\\-yawkey\\-boston\\-donald\\-sterling/3rx44jKooTbUp21sJEFBzM/story.html) in past generations who’ve made grave social mistakes, but have had the benefit of fans eager to turn a blinder eye\n\nOf course, there are some figures that public opinion seems to have not fixated on as much as they should. The [owners](http://www.cleveland.com/browns/index.ssf/2014/10/nfl\\_kickoff\\_the\\_nfls\\_return\\_to.html), for example. \n\nBut I think that everyone will get theirs sooner or later. Maybe. Probably. \n\nHopefully.\n\n”}}]}