The Bandwagoner: Dissecting Skip Bayless’ Dissection of Manning vs. Brady

This week, we review Manning Vs. Brady XVI.

On Sunday, Pats fans rejoiced as His Holiness Tom Brady decisively took down his rival Peyton Manning’s Broncos 41-23 in Foxborough. The two greats have battled each other 16 times, with Brady coming out on top 11 of those times. We may argue ’til we’re all blue in the face about it, but right now you’d be hard pressed to find someone on your way to work who’d take Mr. Forehead over Mr. Hairnet.

But unfortunately, Skip Bayless gets it. He got it way, way too much.

I’m aware that Skip Bayless has been engineered by ESPN* in a lab to piss off half the country, and get the other half talking about him on social media. But it’s effective. There are few things that piss me off more in the sports world than old white men using outdated modes of “respecting the game” as their only contributions to sports analysis, then going on national television and regurgitating the company line in the name of keeping sports sacred. Skip Bayless, Rick Reilly, almost all current FOX and ESPN NFL analysts, Joe Buck**, Joe Buck and Joe Buck, Tim McCarver, Jim Nantz, and the executive staffs behind them wouldn’t stop “respecting the game” if it were beating them up and taking their lunch money.

* The biggest sports network in America, and owned by Disney. Every day, I turn on ESPN and wait for the day that a talking Mickey Mouse head replaces the entire crew of “Baseball Tonight,” because that would be hilarious.

** A commentator known in my current household as Joe “Don’t Give a” Buck because we like to think we’re clever like that.

But he’s also a person, and (presumably) the author behind that article. And were it not for the forest fire-level of smoke blown up his own sphincter, we here at BDCwire would leave well enough alone, and just say, “You do you, Skip.”

But it’s our (specifically, my) duty to call out the Brady Truthers that give Brady the douchebag air that he sometimes deserves, and Mr. Bayless is a Brady Truther of the worst possible order. Let’s take apart this passage:

Brady is more of “just a football player” than Peyton. During games, Brady will still go crazy competitive — almost Michael Myers in “Halloween” psycho — and run all the way to the end zone to helmet-bump Rob Gronkowski after Gronk has beasted in for a touchdown. Has any star QB ever shown this much emotion after a mid-game TD, let alone a cinch Hall of Famer at age 37?

Brady is more of “just a football player” than Peyton. Excuse me? Does Peyton’s moonlighting as the greatest acting talent of his generation somehow negate his qualifications to be “just” a football player? Are we just going to forget that Brady isn’t even the more famous one out of his marriage? Does this ridiculous sentence even merit the respect of an entire paragraph of analysis? (Answer: no.)

During games, Brady will still go crazy competitive — almost Michael Myers in “Halloween” psycho — and run all the way to the end zone to helmet-bump Rob Gronkowski after Gronk has beasted in for a touchdown. More on this in a second.

Has any star QB ever shown this much emotion after a mid-game TD, let alone a cinch Hall of Famer at age 37? Hey Skip, I’ve got an idea. Let’s take some impossible-to-prove anecdotal evidence, spruce it up with verbs like “beasted” and descriptions of serial killers with literally zero expression (you know, to highlight how emotional someone is), and use it as evidence to compare two players’ lives and careers. Sound good? Great, me too. I mean hey, I remember when we were all saying the same things about Brett Favre*, but nobody’ll care that much.

* Brett Favre is now known as the source of ESPN’s entire content base for about three straight NFL offseasons as he debated whether or not to come back from retirement. It’s a shame that this overshadowed one of the best football careers of anyone ever, but you simply could not get away from this asshole if you tried.

This whole so-called analysis utilizes unquantifiable and simply untrue anecdotal evidence that’s supposed to “help” Brady’s “argument” against Peyton for the title of Best Quarterback Ever, but only ends up inflating Brady to an unrealistic figurehead designed to play the game the right way– say yes to your coach, don’t rock the boat, come through in “the clutch,” (as if we’re just going to discount Peyton’s trips to the Super Bowl as anomalies) and save Bill Belichick from incompetence. 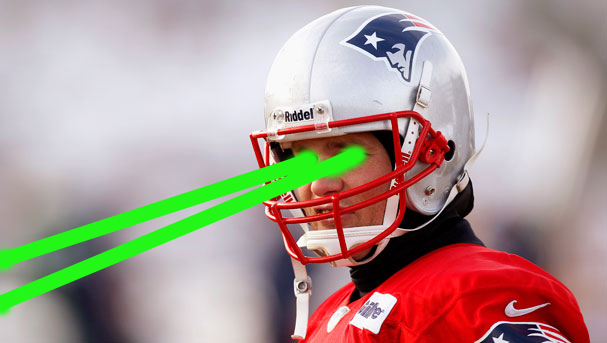 The aforementioned Bill Belichik throwaway may be the most egregious example of poor analysis in this excuse for a piece. The assumption that Brady has single handedly kept Bill Fucking Belichick in the coach’s seat is laughable. Did this man forget about a certain quarterback named Matt Cassell?

Brady doesn’t need or deserve the extremely biased fangirling that somehow still arises out of Bristol, Connecticut*. I don’t even think local affiliates are as determined to prove that his peers don’t mean anything.

* The location of ESPN’s headquarters. Eyewitnesses tend to return to their families with a glazed look in their eye and a season pass to Disneyland, but with no memory of the event and a missing kidney.

Bayless makes sure to note his admiration for Manning in the piece’s opening few paragraphs, but when it’s followed up by such egregiously incorrect analysis and attributions to a higher ideal of a quarterback that doesn’t (or shouldn’t) exist, it pretty much eliminates any sense of reconciliation.

Brady deserves the praise that only New England mothers can give, but if it comes at the expense of outright dismissing the real accomplishments of his (maybe better) rival, then it doesn’t mean as much.

Enter to win a pair of tickets to attend The Hess Collection Seminar and Dinner as part of Boston Wine Festival 2018 at the Boston Harbor Hotel on Wednesday, March 14th. END_OF_DOCUMENT_TOKEN_TO_BE_REPLACED

The Black and Gold continue their run tonight at TD Garden. END_OF_DOCUMENT_TOKEN_TO_BE_REPLACED

Who will make the Class of 2018? END_OF_DOCUMENT_TOKEN_TO_BE_REPLACED

It’s been awhile since we talked Black and Gold. END_OF_DOCUMENT_TOKEN_TO_BE_REPLACED

You’re going to wish you were in the Northern Alps. END_OF_DOCUMENT_TOKEN_TO_BE_REPLACED