Thanks to Terrifying Unauthorized Apps, You Can Now Operate on Disney Princesses 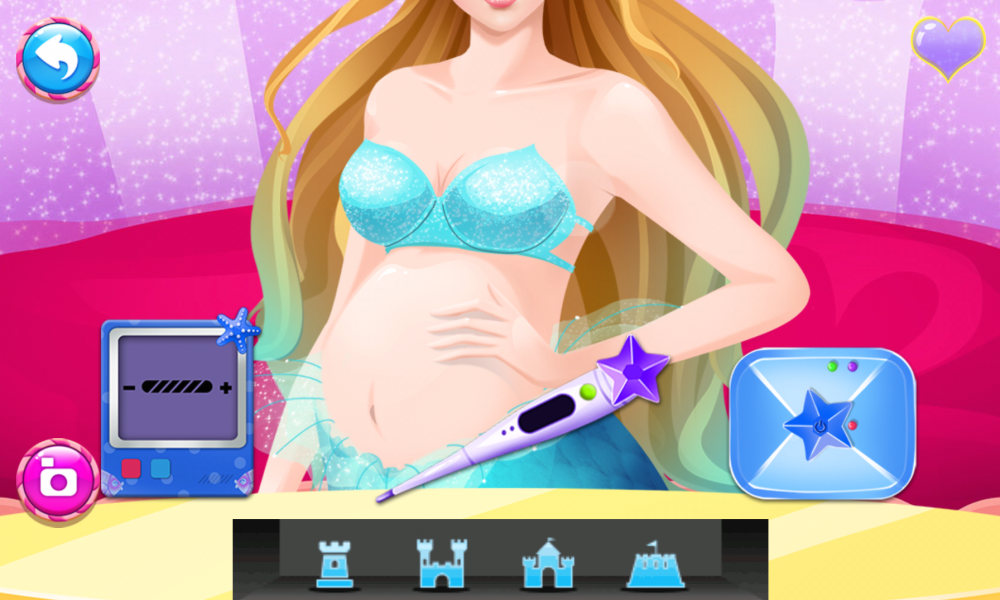 If there’s anything barring cat content that the Internet is oversaturated with, it’s anything concerning the Disney princesses, and I would feel bad about contributing to the mess if I didn’t have disgusting .jpegs to accompany them. So I’m not sorry, but only because I’ve got gross pics.

Even the most cursory review of the Google Play store is like voluntarily stepping into a trap – the vast majority of the free apps available are abysmal and covered in stray ads like lice on a fourth grader. Like all other garbage Internet content, the princesses have become entangled in this web in a series of apps that, for some reason, primarily involve performing C-sections or surgery.

Because why? Because beauty and the perpetuating of the human/mermaid/ogre race is important, that’s why. That or the ’80s Wall Street cocaine productivity is just getting over to Japan. After Buzzfeed uncovered the first of many disturbing unlicensed apps, we decided to burrow deeper into the rabbithole.

Like most unlicensed apps, this “Newborn Baby” application does not feature babies at all. It does, however, feature a mini-game where you can take the temperature of a pregnant mermaid’s armpit, which I shudder to think is the sexual fantasy of someone somewhere. 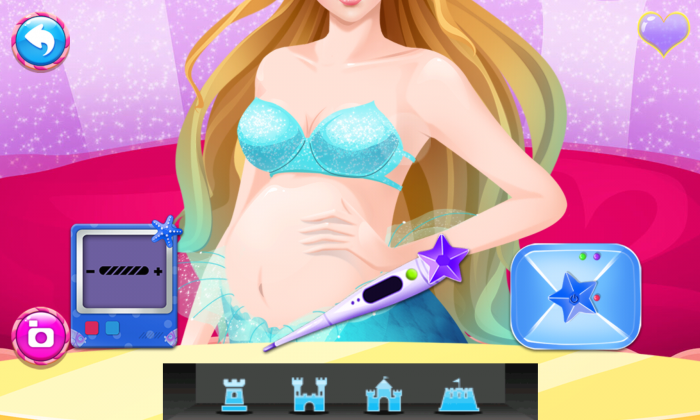 Remind me to call my new hardcore band Mermaid Armpit.

A disturbing theme on these apps is the horrifying babies that these faux royal women are incubating – for instance, this comparatively enormous mermaid fetus resting in the digital womb of Unlicensed Ariel (Army-o? Arlyin?). 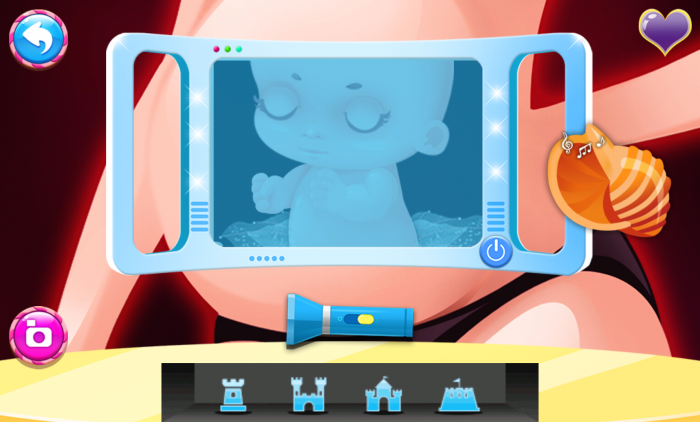 Even less surprising, these glitchy apps are highly liable to glitching, leading to messages that can be interpreted in pretty dark ways. 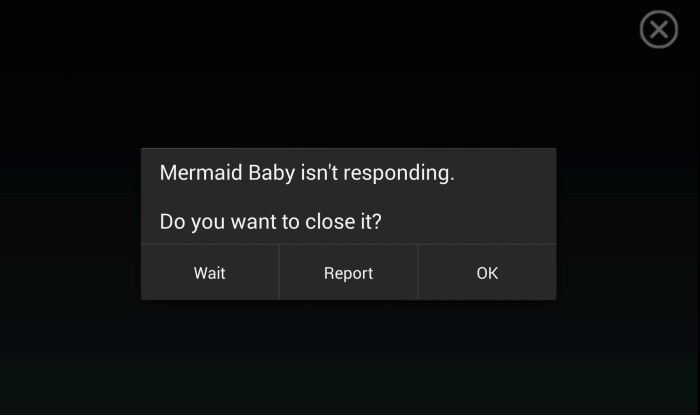 Mermaid Baby never had a chance to respond. 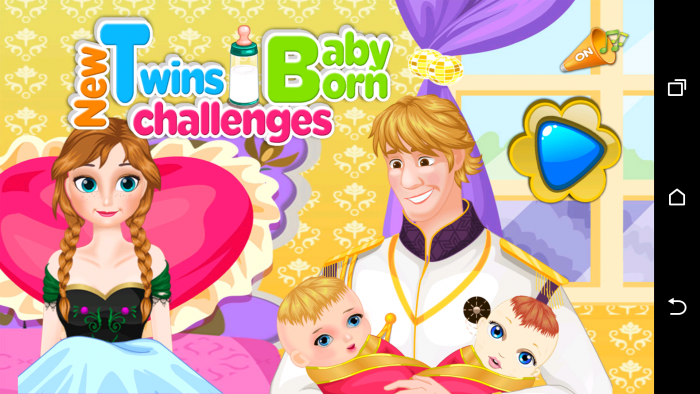 Frozen is arguably the first major princess franchise of the digital age, so it follows that its characters are the victims of the majority of these disturbing mini-games. The New Twins Baby Born Challenge follows Anna and beau Kristoff after their inevitable fade-to-black cartoon moment, and we rejoin her as she is about to give birth via C-section. 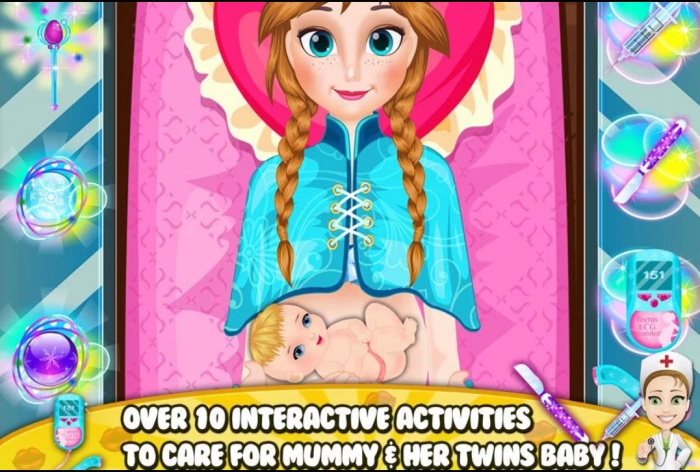 But does she have a nurse? She does not. She empowers you, however, with sedatives, a scalpel and a magic wand to deliver her twin boys. Then, you can then change their eunich-y little baby butts ’til kingdom come, which is a hilarious joke I just wrote about two royals conceiving a pair of big-headed twins. 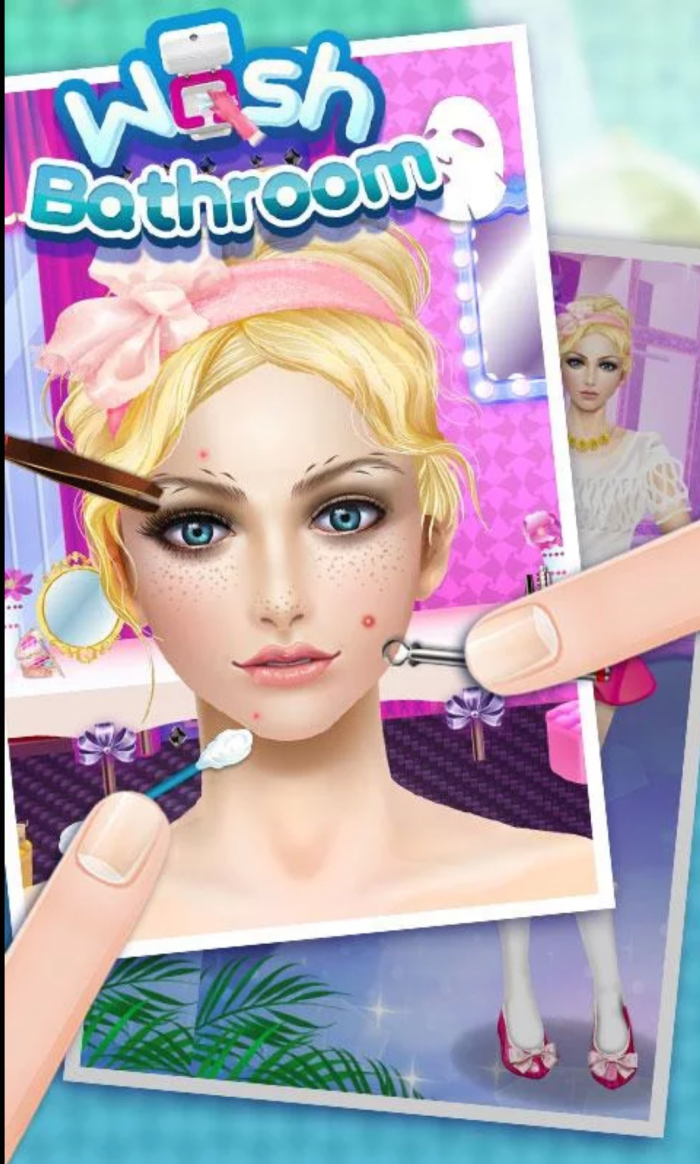 Unfortunately, I wasn’t able to play this game before my phone mysteriously shut off and resent every text I’d composed in the the past twelve hours, but this take on what I have to assume is Cinderella has plenty of fun mini-games…if you can manage to play them. The first level allows you, the digital princess, to plunge a toilet and sanitize its seat before plucking your own eyebrows and forcibly removing pimples from your face.

What event are you supposed to be preparing for, that the first step is sanitizing a public toilet? If you know, please let me know so I can hold my bachelorette party there.

While Elsa’s sister needs you to remove baby princes from her womb, young Elsa has managed to lodge a series of disgusting objects in her intestines and needs a little help getting them out! Don’t worry though, she did her makeup for the occasion, as one does before an invasive surgery. 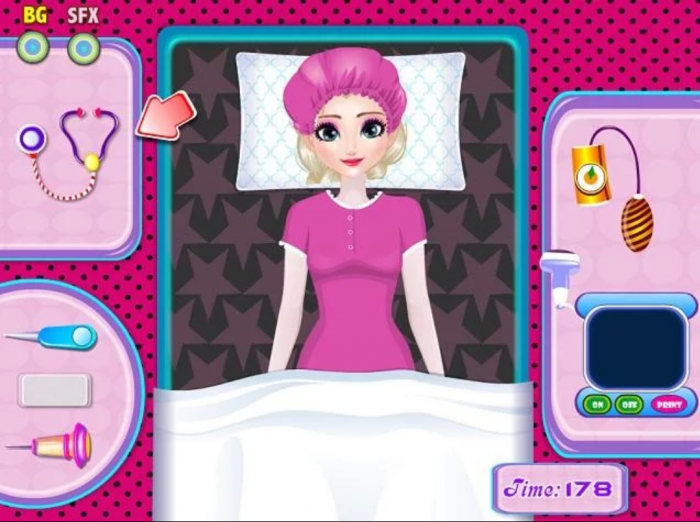 The fix-all solution that is used to remove what is either ketchup stains of blood from Elsa’s stomach is a viscous, all-healing goo that you must once again use a scalpel to gain access to. 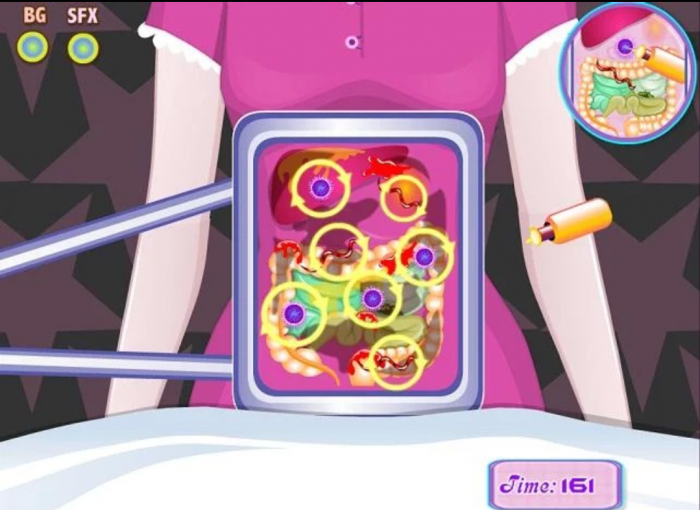 Maybe I’ve been out of the princess game for too long, but I’m honestly surprised that young kids could actually find enjoyment in cutting up one of their favorite cartoon characters, even if it does mean “healing” them. I never considered Princess Belle’s possible stomach cysts when watching Beauty and the Beast, but I never thought twice the fact that she was marrying a large wolflike creature either, so I guess it’s a wash. 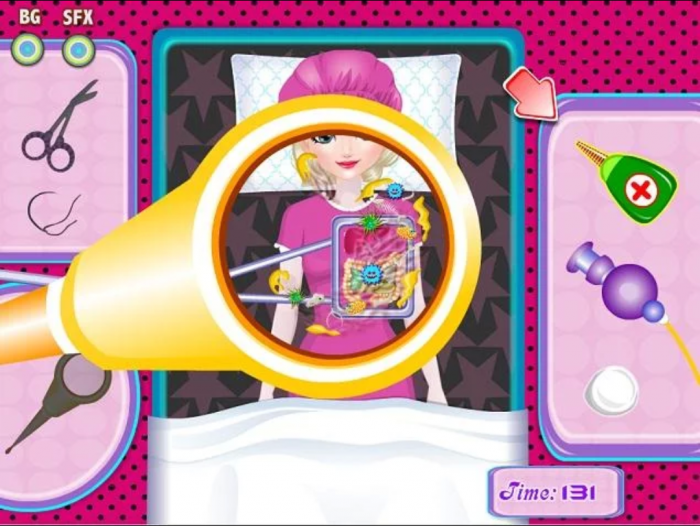 There’s a joke about “Let It Go” and Queen Elsa’s bowel movements to be made but I don’t want to be the one to make it. Be the change.

Speaking as a major Shrekhead, there’s no way I was going to pass up on the lukewarm name of Green Monster Dentist Care. In the first five seconds, Offbrand Donkey kicks Offbrand Princess Fiona in the face – 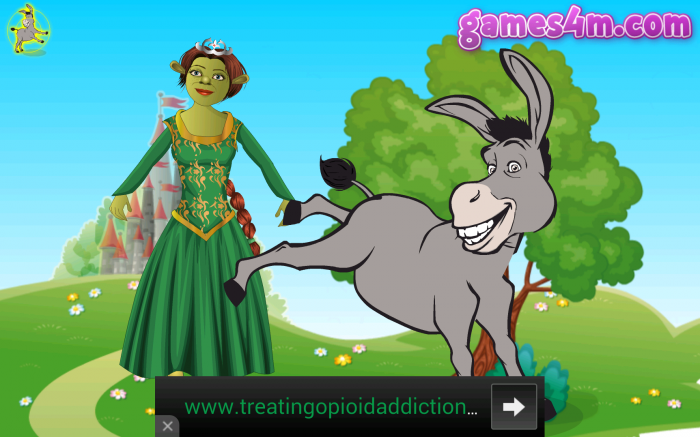 For which she must get dental surgery! 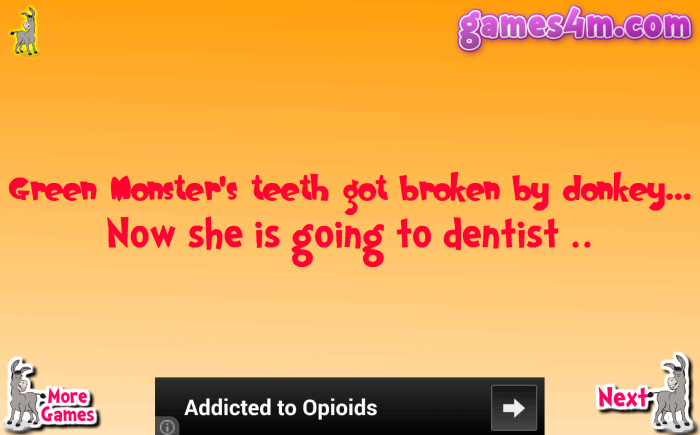 She will not be seeing a lawyer about it, but she is “going to dentist.”

Turns out that in addition to getting her teeth broken, Offbrand Fiona’s teeth are already lodged with garbage, mucus and weird orange stuff! 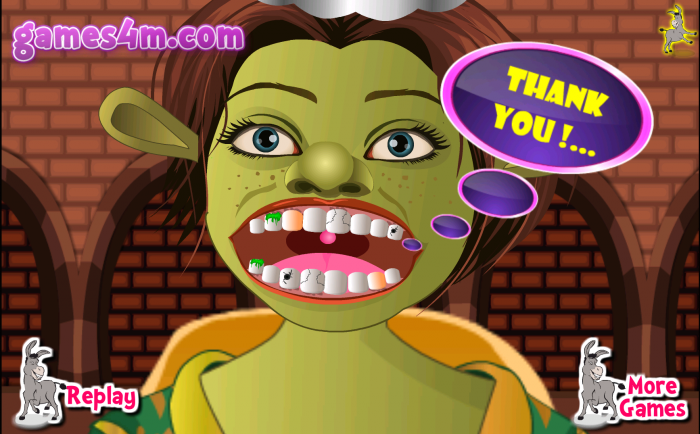 I did a half-assed job of the operation, but she was still very polite.

For most of these games I would crop out the asinine ads that fill out the bottom of the screen, but they’re all about opioid addiction. Whoever decided that there’s a crossover audience here is a blessing.

Right off the bat, there appears to be a dental procedure being performed on Not-Ariel’s left boob. This game is very similar to “Newborn Baby,” but this time you get to snip an umbilical cord! With crab claws! 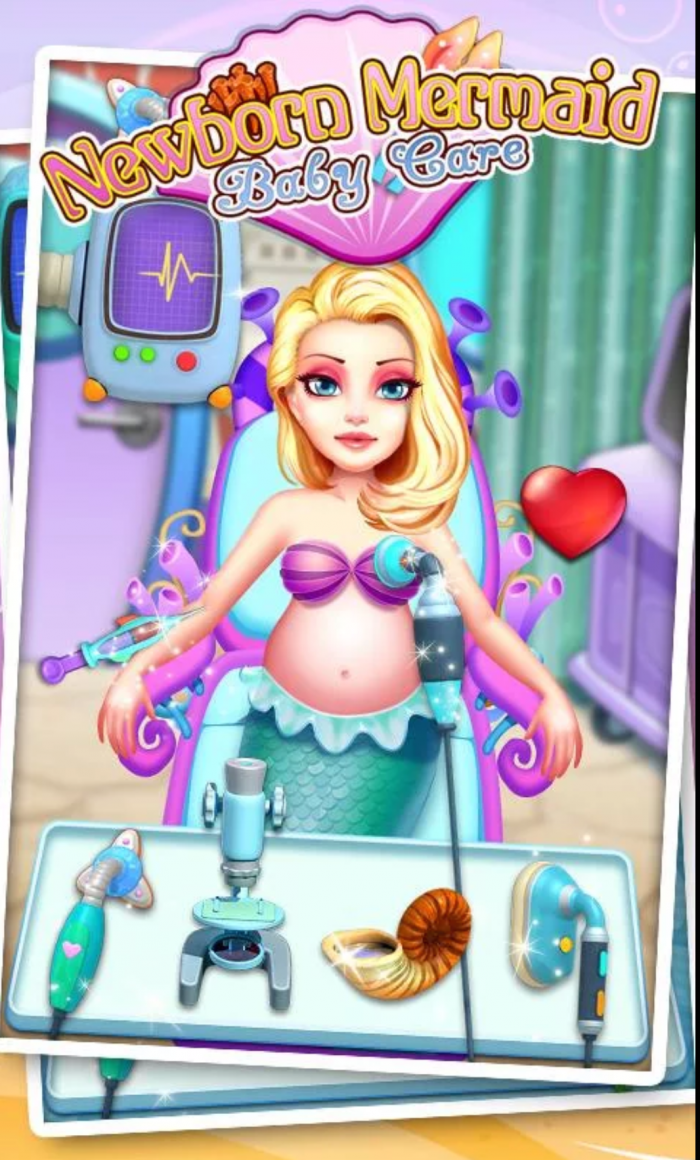 But not before you monitor her very pregnant belly with this magical octopus. It’s bizarre that every medical setup in this series is half real, half underwater objects, but such is the case. 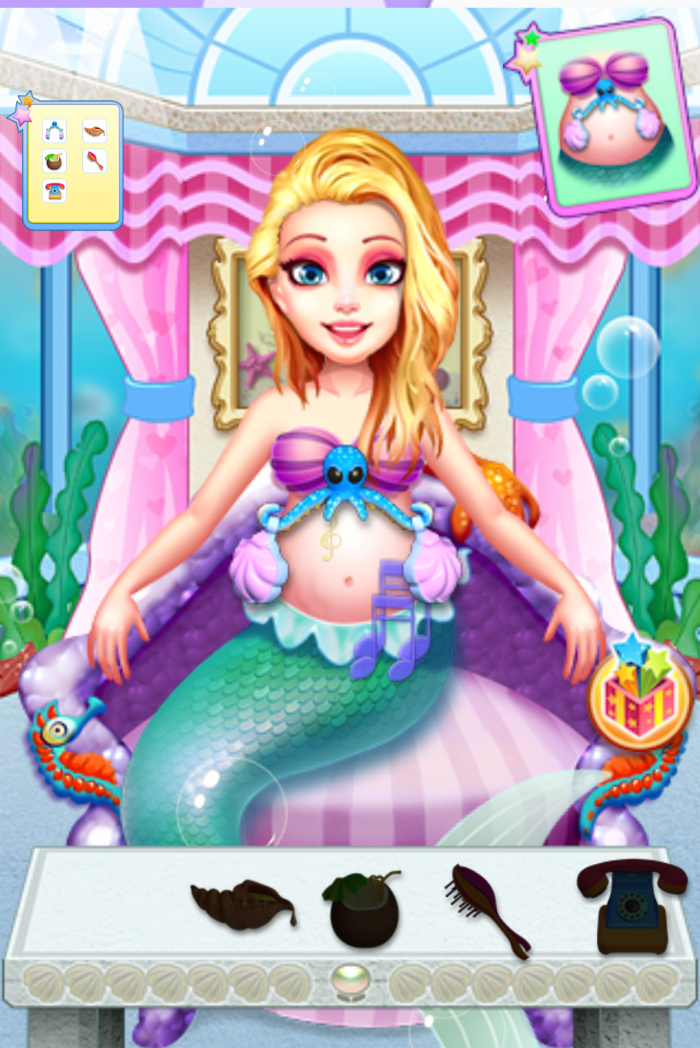 Of course, a pregnancy game isn’t complete without having to snip a mythological creature’s umbilical cord, because nothing can’t be disgusting. At least your child is born with a bra and the cord is inexplicably sparkling! 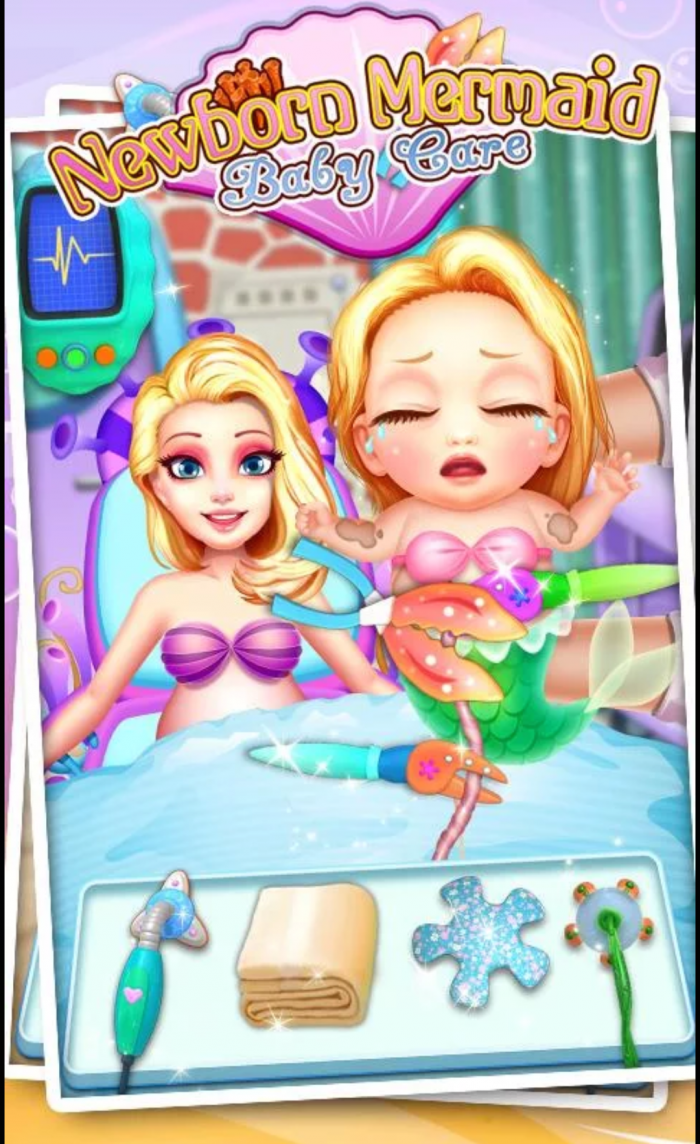 Who doesn’t want the ability to help a mermaid, a creature that (without getting too gross) could not logistically get anything other than a C-section?

And without missing a beat, we are back to disgusting surgery. In a world of tenuous movie tie-ins, this is by far the most tenuous – you can see pretty clearly that a desktop wallpaper from the movie was layered underneath an existing game for hand surgery, which I’m not positive exists. 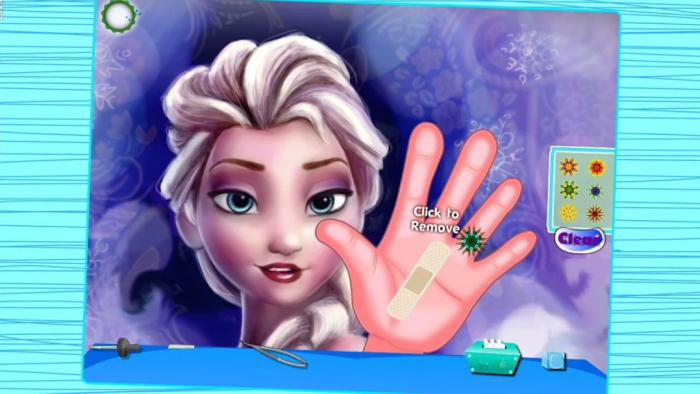 Would you take care of palm boils and really concerning gashes taken care of in the same procedure? And would both of these issues be resolved with a single BandAid? And are these maladies that exist??? I am full of questions that I don’t want the answers to. 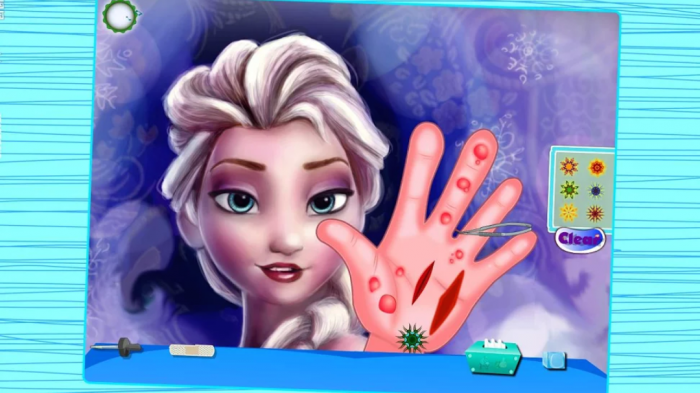 She doesn’t even look grateful for my excellent surgeon work.

Immediately after operating on her sister, I became retroactively grateful for Elsa’s passivity, because Anna cries the whole way through this facial surgery. 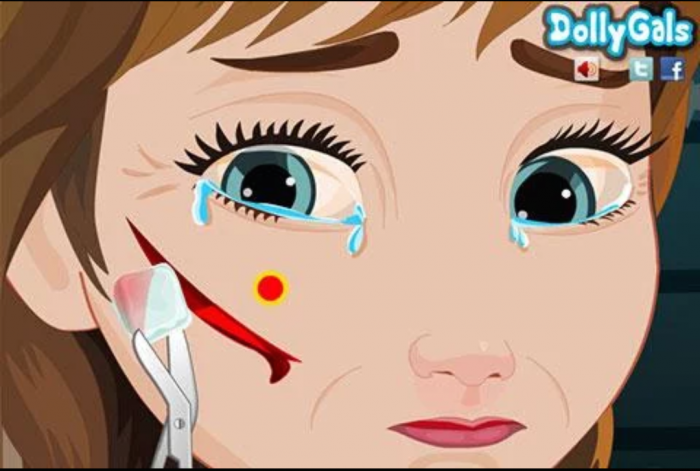 Surgical placement of an ice cube on a bleeding wound? What does this resolve? Have to assume this was an injury sustained in a drunk bar fight with one of those snowmen. 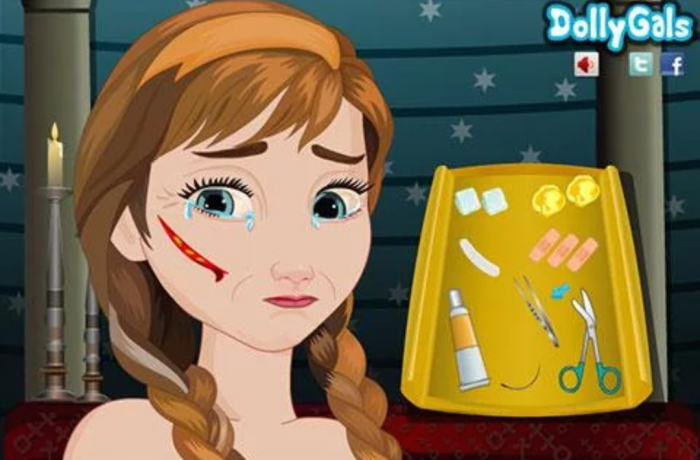 And now, for the mother-load and my personal favorite horrifying app…

This one deeply bothers me, stirring feelings that I didn’t even know I had anymore. I can’t even say that this is exactly what it sounds like, because what comes to mind when the phrase “back spa” is uttered but a looming question mark? This application inhabits a world where princesses have the backs of people who have lived in a dumpster for the past ten years, filthy and covered in hair and sores. 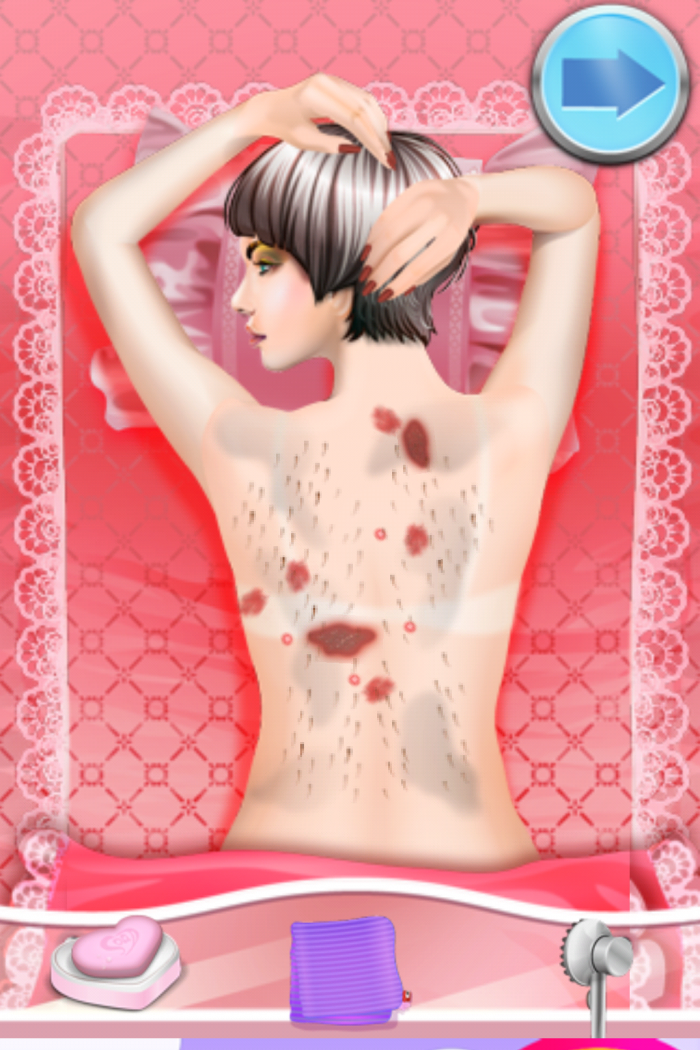 Fortunately, YOU are the spa professional who is going to #change #their #life. 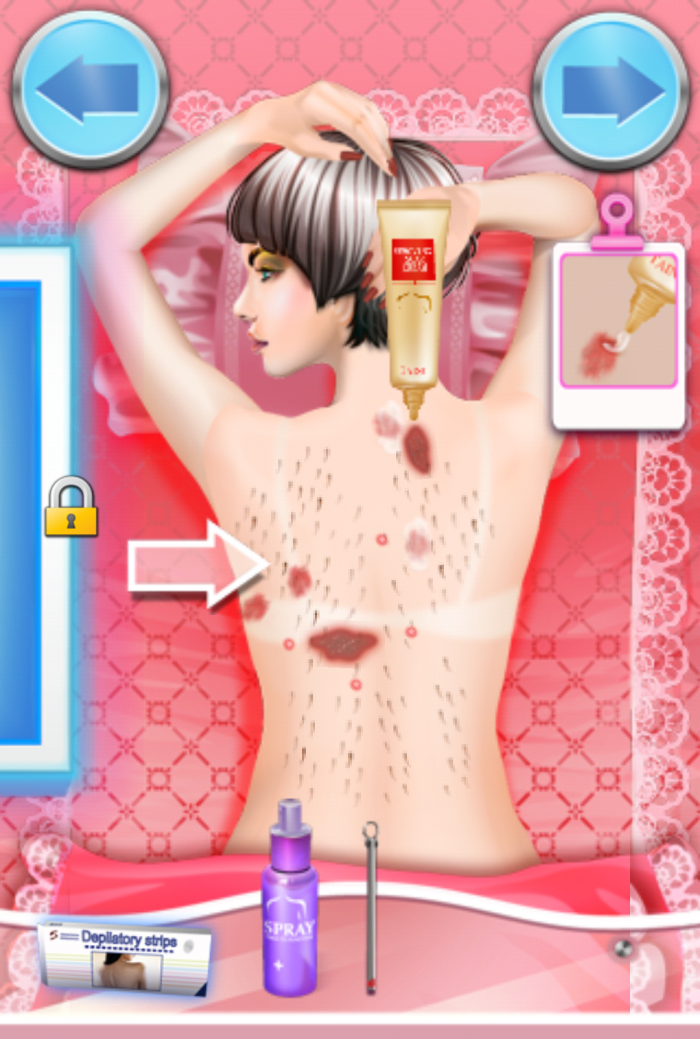 Or, at very least, put digital ointment on their filthy stinking wounds, then place hot rocks on them to calm the poor princess down from whatever crime of nature happened to her backside. 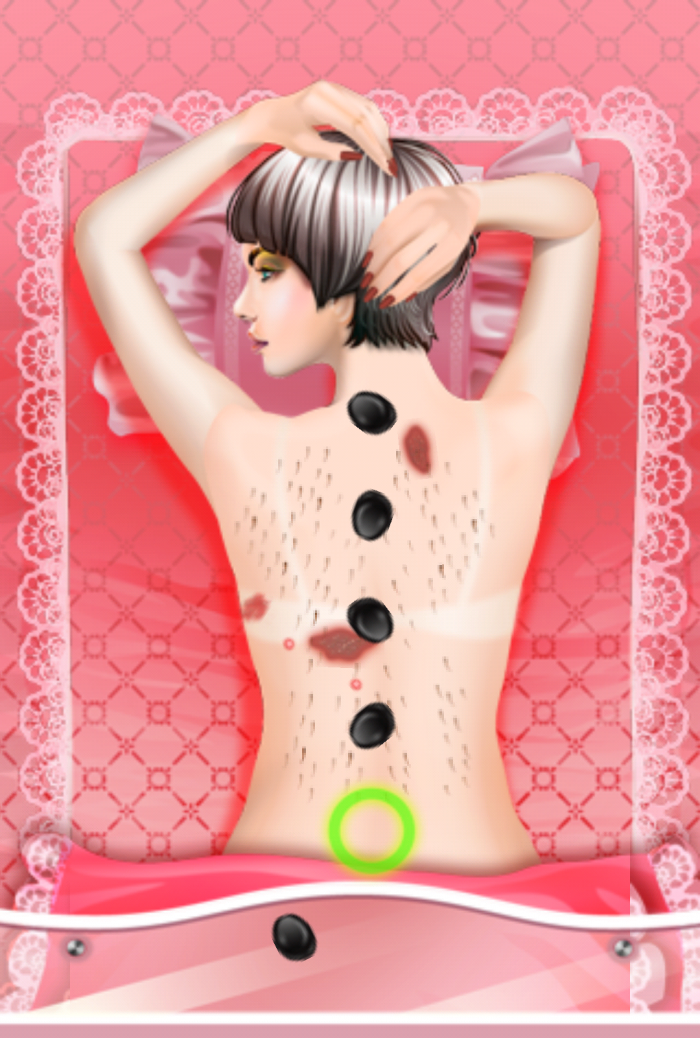 If there are this many of those games, it must be for a reason, and we think this horrible parent who dared to spend time reviewing one of the bevy of Frozen knock-off games on Google Play sums it up best:

Yeah, thanks a lot.

Click here to see where we’ll be the rest of the season! END_OF_DOCUMENT_TOKEN_TO_BE_REPLACED

We kicked off our 2018 season on the coldest day EVER. END_OF_DOCUMENT_TOKEN_TO_BE_REPLACED

Golden Globe and Emmy nominee Benjamin Wallfisch is the composer responsible for the score of the hit movie IT. I talked to Ben about his approach to scoring the new version of this iconic story and his thoughts on film and music overall. Some very insightful commentary; listen in. END_OF_DOCUMENT_TOKEN_TO_BE_REPLACED

Our annual sushi celebration is fast becoming the social event of the season. END_OF_DOCUMENT_TOKEN_TO_BE_REPLACED

Rupert Gregson-Williams is an award-winning film composer. He just so happened to compose the score for this summer’s big blockbuster Wonder Woman. We talked about his beginnings in film scoring, film scores that move and inspire him and, of course, Wonder Woman. END_OF_DOCUMENT_TOKEN_TO_BE_REPLACED

Bringing it all home. END_OF_DOCUMENT_TOKEN_TO_BE_REPLACED

The sun came out, and so did we. END_OF_DOCUMENT_TOKEN_TO_BE_REPLACED