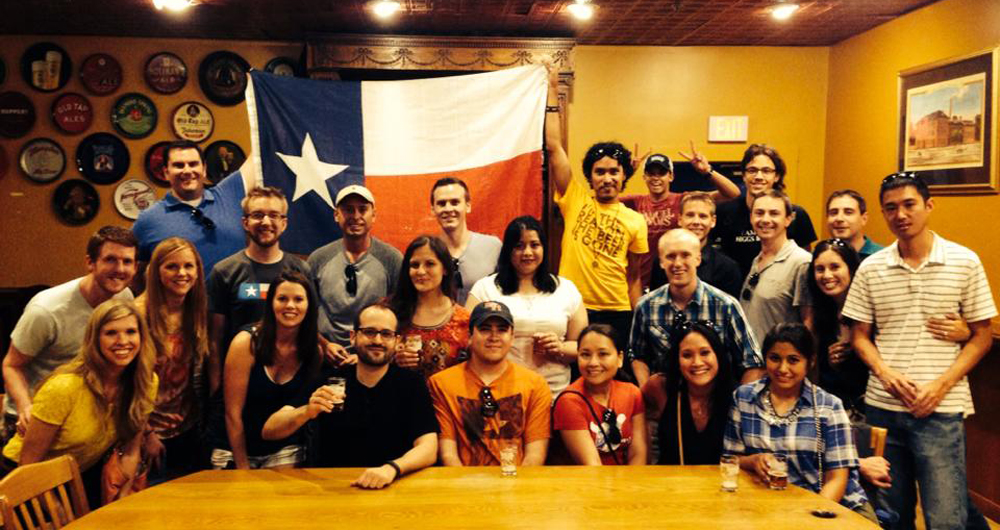 Let’s say you and a friend or two spent last Friday night checking out Loretta’s Last Call, Fenway’s newish Bro Country-themed bar and restaurant. The place was packed, a Nashville band decked out in flannel crooned on stage, and everything smelled like it’d been fried three ways from Sunday by Paula Dean. A few minutes in, you noticed the Texas flag in the corner, draped along the bar and flanked by a few dozen drinkers eyeing the rest of the crowd. You probably thought the symbol of former president George W. Bush’s home state was an obvious contribution to the atmosphere of the place.

If so, then you’d be wrong on two counts, because W was born in Connecticut, and the flag wasn’t part of the bar’s decor. It’s actually the property of Matthew and Michelle Johnson, native Texans both and the founders of the Texpats, a club for their fellow statesmen and women living in Boston. Whenever the lone star isn’t hanging outside their apartment, the University of Texas alums use it to flag down club members at the group’s monthly meetings.

“We were new to Boston and didn’t know a soul,” says Michelle. “When we started the group, we were hoping to learn from others who’d paved the way before us.”

They initially used the website Meetup to kick start the group, but it only took a few gatherings to get things going. Soon, dozens of college students, young professionals, recent transplants, and old hands were meeting every month to share memories and make new ones. The Texpats often met at public places like Loretta’s in the early days, but now they split their time judging New England attempts at Texas ambiance (i.e. Loretta’s) and cooking up the real thing at members’ homes.

Chelsea Hewitt, who hosted the club’s Halloween party last year, loves the camaraderie it affords. “It’s great to get together with people who understand where I come from, people who don’t immediately ask if I rode a horse to school or why I don’t have a Texas accent.”

Others miss the food, especially since many of the ingredients affiliated with Tex-Mex aren’t as widely available in New England as they are elsewhere. “I was craving tamales and tacos and wondering if anyone else around here was, too,” says Victoria Smith. “I’m so glad I stumbled upon the Texpats. It’s like having a little taste of home here in Boston.”

A few years in, the gang is thriving with older members from the Meetup days and newbies who’ve come along since then. Whenever old college friends or work colleagues move to the area, they’re sure to be introduced at the next monthly meeting.

Otherwise, new ex-Texans are always showing up at the regular hang outs. This summer, over 20 Texpats commandeered a Saturday tour of the Sam Adams Brewery in Jamaica Plain. When the tour guide tried to make small talk and asked where everybody was from, the group bellowed their home state’s name in a communal roar. Surprised, the guide tentatively asked the room, “Is everyone here from Texas?”

Even non-Texan associates are brought along to the party, whether they’re spouses, significant others, or friends. No one Texan or not has ever been scared away from the club yet, but the initial shock is always the same. “Seriously? There’s a club devoted entirely to the state of Texas here in Boston?”

The Texpats, however, are never surprised. Least of all, co-founder Michelle, who proudly jokes about how obvious such a club’s existence is. “With the exception of one or two other states in the country, only Texans are arrogant enough to bond over the fact that they’re from a particular state.”

Enter to win a pair of tickets to attend The Hess Collection Seminar and Dinner as part of Boston Wine Festival 2018 at the Boston Harbor Hotel on Wednesday, March 14th. END_OF_DOCUMENT_TOKEN_TO_BE_REPLACED

Boston band Funeral Advantage is Tyler Kershaw. And Tyler Kershaw had a fun childhood, so it seems. END_OF_DOCUMENT_TOKEN_TO_BE_REPLACED

Perry put me on to daephne and the album blew my mind. END_OF_DOCUMENT_TOKEN_TO_BE_REPLACED

END_OF_DOCUMENT_TOKEN_TO_BE_REPLACED

Ted Regan of the family-owned and operated Mass Bay Lines joined me in studio this morning. This summer, Mass By Lines is celebrating their 50th anniversary by adding a variety of specialty cruises to their well-known Harbor Tours, Sunset Cruises, and Starlight Cruises. Click here to enter to win VIP passes that will get you on to any cruise for free for the entire summer! Click through to listen to my chat with Ted. END_OF_DOCUMENT_TOKEN_TO_BE_REPLACED