Readers interested in Cruz’s run can visit his official campaign website at tedcruz.org — not tedcruz.com, dot org. That’s because someone else owns Tedcruz.com, and has been using it to voice support for President Barack Obama. 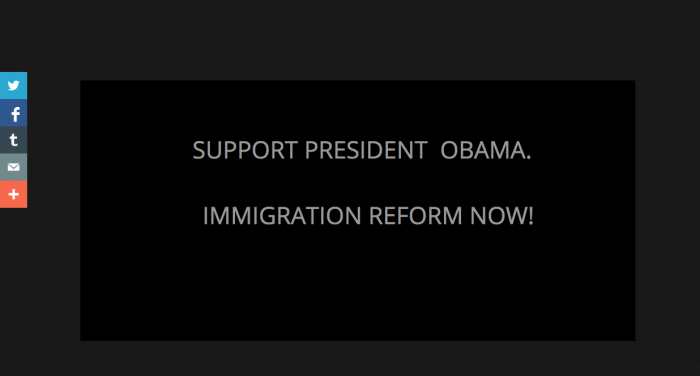 Cruz’s misfortune in website domains is due to an Arizona attorney also named Ted Cruz buying the domain back in 2004 to advertise real estate, according to Mother Jones. Here’s what the website looked like back in 2008.

But somewhere along the line, Cruz decided his uniquely lucrative domain should be used for a more political purpose. Slightly less damaging but equally unpresidential, tedcruz2016.com redirects to a website that endlessly cycles through four landscape photos, with no indication of any purpose for the site.

Although Cruz has some of the funnier URL redirects associated with his campaign (Tedcruzforamerica.com redirects to healthcare.gov, for example), he’s hardly alone. Chrischristie.com is the personal website of a web programmer with the same name from Milwaukee. Friends of Hillary Clinton, meanwhile, had to deal with several websites that were already claimed by domain squatters. These websites are similarly poor representations of two potential Presidential candidates, though neither site take a direct shot like tedcruz.com does.

So should Cruz be worried? Not really. Most people no longer navigate directly to websites, preferring to use search or social to find information. If you Google tedcruz.com, it shows results for tedcruz.org first.

And according to audience measurement company Quantcast (per the Washington Post), tedcruz.org is ranked the 2,156th most-visited website in the U.S. currently, while tedcruz.com is ranked 618,938th. As soon as the news cycle ends, that sub-600,000 ranking will likely dip even lower.

HUBweek came to Boston, and we were there to take it all in. END_OF_DOCUMENT_TOKEN_TO_BE_REPLACED

While many have called out Davis since a video of her refusing to issue a marriage license to Rowan County residents David Moore and David Ermold went viral in July, relationship columnist and gay activist Dan Savage went a step further on MSNBC Tuesday night, saying that “this is about someone hypocritcally looking to cash in”. He added: “And she is a hypocrite.” END_OF_DOCUMENT_TOKEN_TO_BE_REPLACED

END_OF_DOCUMENT_TOKEN_TO_BE_REPLACED

David Filipov was part of the team that headed up the Boston Globe/Fox25 Olympic Debate last night. He offered his takeaways and analysis after an update on the latest exchange between Governor Baker and the USOC. All in all, our conversation does a pretty good job of getting you up-to-speed on all things Boston2024. END_OF_DOCUMENT_TOKEN_TO_BE_REPLACED

END_OF_DOCUMENT_TOKEN_TO_BE_REPLACED

I’m in my mid-twenties, and I’ve been working as a substitute teacher for the last couple years (I joined Teach for America right out of college). I know some of the girls in classes I teach have crushes on me — high schoolers aren’t very subtle — but I brush it off, because I’m not an idiot. Last week, however, I got a disturbing email from a girl in the English class I subbed for. Pictures were attached. You get the gist. What do I do about this situation? I obviously haven’t responded, but I’m afraid she might go Lifetime-movie on me. END_OF_DOCUMENT_TOKEN_TO_BE_REPLACED

Ridiculous doesn’t even begin to capture all that transpired, from the storm of emojis to the storming and barricading of Jordan’s house by a cavalcade of Clippers. END_OF_DOCUMENT_TOKEN_TO_BE_REPLACED