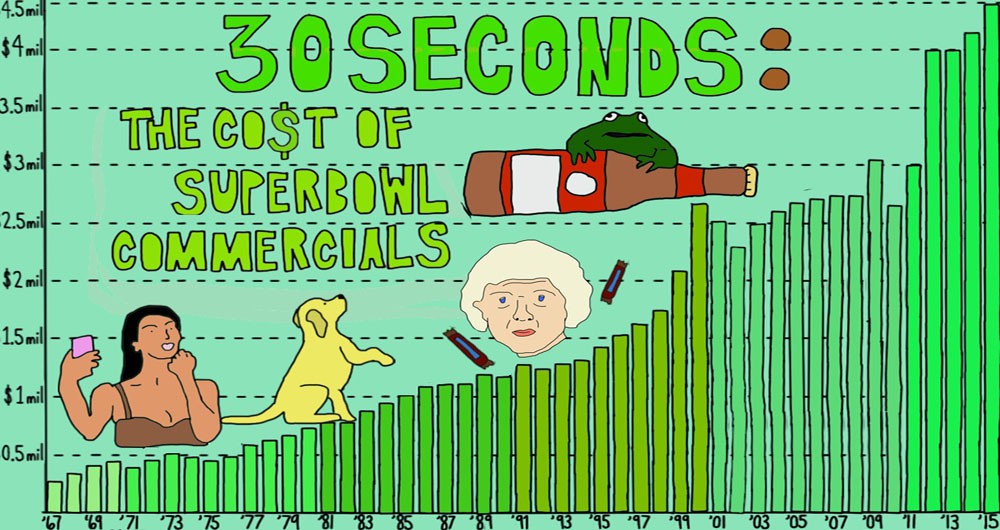 This weekend, advertisers will pay an average of four and a half million dollars for thirty seconds of advertising real estate during the Super Bowl Sunday broadcast on the only TV event of the year where the commercials are more important to some than the game itself.

When a viewer thinks “Super Bowl Commercial,” a few steady themes come to mind – big name brands, high production value, risk-taking strategies, creating an image that will be talked about around the water cooler the next day. Major Internet company GoDaddy has already been pressured to pull a commercial from the air that pushed the limit too far, and others like T-Mobile’s ad starring Kim Kardashian (who recently weighed in on DeflateGate for some reason) have made headlines well in advance of their airing.

So how much are companies forking over for this massive exposure? As the broadcast’s reputation for commercials has increased over the years, so has the dollar value attached to the airtime – this year, a record-setting $4.5 million will secure a brand approximately 113 million pairs of eyes according to International Business Times, a move that could pay for itself if a company plays its cards right.

Take a look at the increase in the price tag of thirty seconds since the first Bowl in 1969 – sure, inflation’s a factor, but there’s no denying that NBC was able to set a new advertising revenue record this year based on the extra scrutiny and value placed by even the average viewer on this weekend’s event.

END_OF_DOCUMENT_TOKEN_TO_BE_REPLACED

Enter to win a pair of tickets to attend The Hess Collection Seminar and Dinner as part of Boston Wine Festival 2018 at the Boston Harbor Hotel on Wednesday, March 14th. END_OF_DOCUMENT_TOKEN_TO_BE_REPLACED

The Black and Gold continue their run tonight at TD Garden. END_OF_DOCUMENT_TOKEN_TO_BE_REPLACED

Who will make the Class of 2018? END_OF_DOCUMENT_TOKEN_TO_BE_REPLACED

It’s been awhile since we talked Black and Gold. END_OF_DOCUMENT_TOKEN_TO_BE_REPLACED

You’re going to wish you were in the Northern Alps. END_OF_DOCUMENT_TOKEN_TO_BE_REPLACED