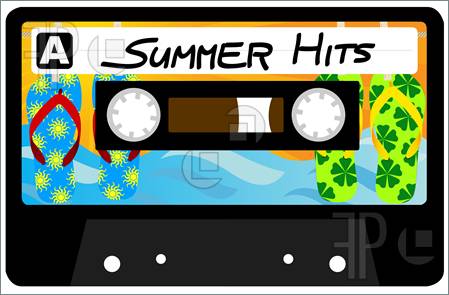 Last June, we all made our Summer Song of 2014 predictions. We were all wrong. (It ended up being this.)

Now, that’s not to say our collective track record isn’t all that good. Because it actually is.

Full disclosure: it was actually Paul Driscoll, not me. But still, we get the credit. So what about this coming summer?

@adamxii so @Sylphiel and I are arguing over which is the more likely summer jam: Electric Love or T-Shirt Weather. Pls help

Those are two damn good candidates. Now, the problem I run into is going with my heart vs. going with my head. My heart loves Metric’s new single “The Shade (I Want It All),” but it’s too too new to catch on by the summertime. And Jamie xx’s “Loud Places” has so much potential, but it’s too mellow. Summer jams need to have some pep. So I’m telling my heart to pipe down, listening to my head, and hitching my carriage to “T-Shirt Weather” by Circa Waves.

The title, the overall vibe, it’s gotta be a winner, right? So you’d think. I asked Julie Kramer for her pick, and she’s going with “My Type” by Saint Motel.

The song’s already made it into a car commercial, so the sky’s the limit. I’d say Julie’s pick is the early favorite. Which would make Paul Driscoll’s choice of “Greek Tragedy” by The Wombats the dark horse in this year’s race.

That leaves us with Steph Mangan, who, per usual, it pulling her pick out of left field. It’s “Dream Lover,” the brand new track from Destroyer.

So there you go: our nominations for Summer Song of 2015. Our radio compadre, WBMX Music Director/APD/Hit-picker Mike Mullaney checked ’em out and checked in with his.

A great pick! Wanna add yours to the conversation? Let us know what it is!

Enter to win tickets to see Trio Da Kali at The Villa Victoria Center of the Arts (Newton, MA) on April 10th. END_OF_DOCUMENT_TOKEN_TO_BE_REPLACED

END_OF_DOCUMENT_TOKEN_TO_BE_REPLACED

Enter to win tickets to Rhye at The Paradise on February 28th. END_OF_DOCUMENT_TOKEN_TO_BE_REPLACED

Click here to see where we’ll be the rest of the season! END_OF_DOCUMENT_TOKEN_TO_BE_REPLACED

END_OF_DOCUMENT_TOKEN_TO_BE_REPLACED

Enter to win a pair of tickets to attend The Hess Collection Seminar and Dinner as part of Boston Wine Festival 2018 at the Boston Harbor Hotel on Wednesday, March 14th. END_OF_DOCUMENT_TOKEN_TO_BE_REPLACED

The Black and Gold continue their run tonight at TD Garden. END_OF_DOCUMENT_TOKEN_TO_BE_REPLACED

Her new album has been pushed back, but we have Kimbra’s new single for you. END_OF_DOCUMENT_TOKEN_TO_BE_REPLACED