5 Sandwiches That You Need to Try in Boston This Spring 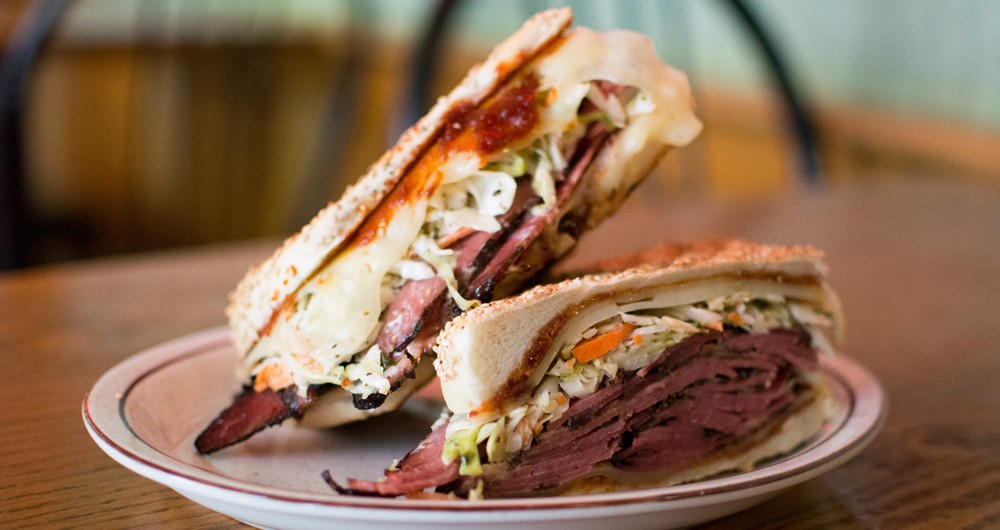 The following piece was co-authored by Jon Mael and Emily Boyd.

The transition from winter to spring means two things: get ready to see a lot of pale arms and legs for a while, and get ready to discover some great new grub. Now that you can walk two blocks down the street without getting frost bite, why not check out some of the best and most legendary sandwich spots that Boston has to offer?

You can’t go wrong with any dishes at these places, but these are some sandwiches worth grabbing this spring, as they all feature traditional warm weather flavors. 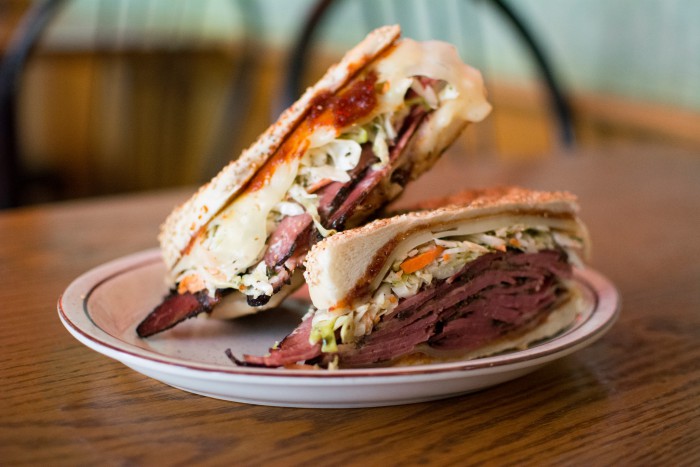 This unique creation from legendary downtown sandwich shop Sam LaGrassa’s is loaded with huge, punchy favors. The tangy BBQ sauce plays well with the slightly sweet cole slaw and creamy Swiss. The star of the show, however, is the tender, smoky, thick cut pastrami, which Sam’s gets specially made in New York and is among the best in the city. It falls apart in your mouth after each bite. Sam’s doesn’t skimp out on portions, loading a tall stack of the meat on the bread of your choice before taking it to the panini press, where it’s grilled up so everything melts together.

“BBQ sauce with cole slaw is a classic on its own,” says chef Rob LaGrassa. “But then you add our pastrami with the smokiness and sweetness, it’s wicked awesome.”

“People are excited to try it,” he adds. “Sometimes people will try it once and get it every time they come in.”

A good BBQ experience is part of American culture. The Fenway’s Sweet Cheeks Q provides one of the best overall experiences, but the focus is on the food. They get down to business at Sweet Cheeks, where the food is dished right onto a tray because they don’t mess around with plates. The Great Northern Brisket sandwich packs some serious flavors, and is straight up summer fun. The mess of seasoned slow cooked meat served over buttery Texas Toast needs no other fixings. There’s so much flavor in the tender shredded brisket that it’s important to respect the meat and not dress it up. Sweet Cheeks is truly a safe haven for meat and fun-lovers alike. 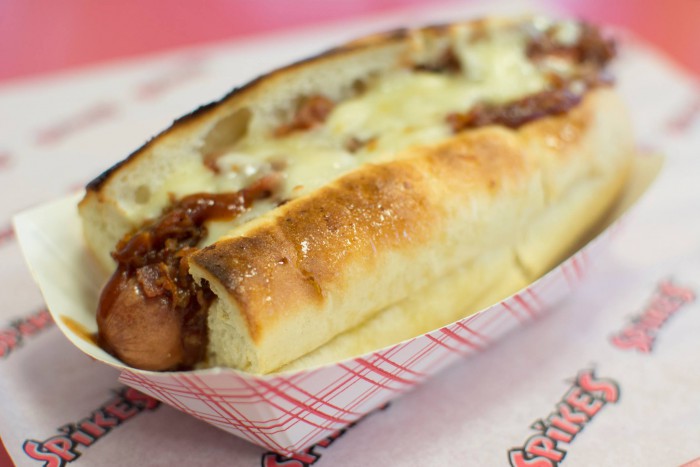 Is a hot dog a sandwich? That debate has been raging since the first one was served. For the sake of this story, yes it is, especially when it comes from Spike’s Junkyard Dogs in Allston. Franchisee Dave Gettleman likes to say “Spike’s ain’t no weenie” and when you see the quarter pound dog nestled in a fresh roll with a stack of toppings, you’ll definitely agree.

Spike’s offers plenty of good options, but the Texas Ranger is spring on a bun. The dog is dressed with gobs of melted cheddar, a sweet and thick BBQ sauce, and chopped up bacon, just in case you thought this was going to be healthy. There are a lot of flavors going on, but they meld together nicely and evoke that backyard BBQ taste that is so hard to recreate. If you’re really feeling hungry, you can try to eat six dogs in one sitting and earn a spot on Spike’s “Wall of Fame” as well as a free T-shirt.

“It’s our most popular dog,” Gettleman says. “I’ve had customers question putting BBQ sauce on a hot dog, then they order it and say ‘that’s the best dog I’ve ever had!'”

The Pork Gyro at Gyro City 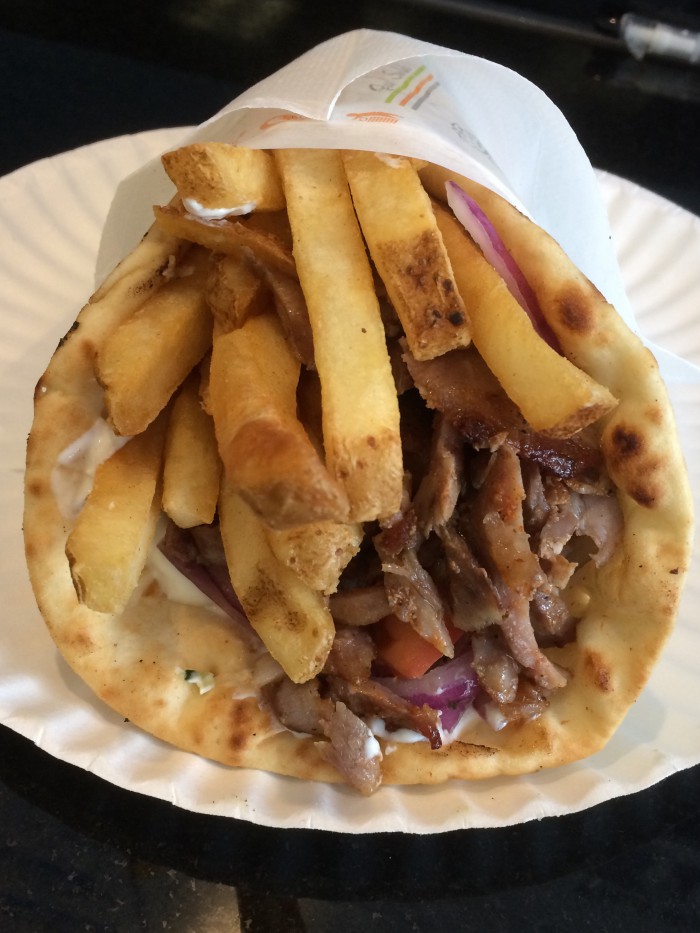 Street food is all the rage right now, but who can be trusted to do justice to the classic flavors? Gyro City’s namesake sandwich holds its own and proves why there’s a store named after it in the first place. At the Fenway eatery, each gyro is made with care, and there are choices including pork, chicken, and lamb souvlaki.

This is another establishment that puts almost excessive care into their meat. Anyone coming in walks right by the giant rotisserie where the meat is cooked before it is shaved off for sandwiches. This embodies another trend of being able to see the food being cooked, because seeing is believing, and you better believe this will be delicious. The pork gyro is very popular, and rightfully so. Tomatoes, onions, and a rich tzatziki sauce join the succulent meat in warm pita. Gyro City even takes things one step further by adding french fries right in the sandwich — because walking down the street on a beautiful spring day requires a free hand. 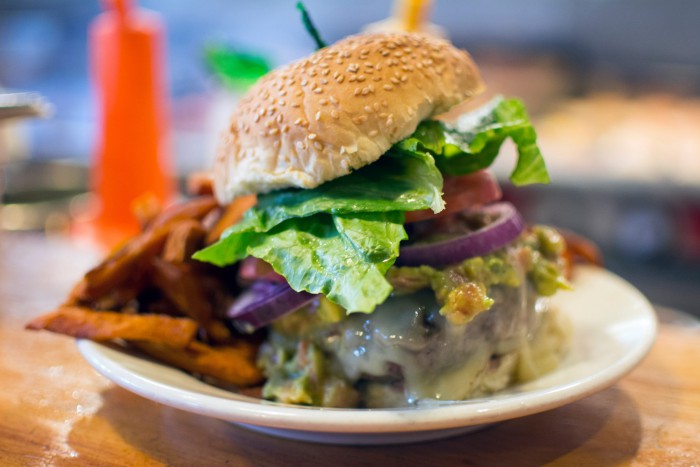 To say Bartley’s is legendary may be an understatement — it’s a bonafide Boston landmark. The Harvard Square burger joint has been cranking out their quirky, offbeat patties since 1960 and has never been afraid to take chances. Many of their uniquely named creations have become favorites over the years, but for springtime, The Tom Brady is the way to go. The decade-old burger’s namesake is a native of San Mateo, California, and you definitely get that West Coast flavor with each bite of this masterpiece.

Cheddar, guacamole, red onions, lettuce, and tomato grace the seven ounce, cooked-to-order patty. If you’re feeling especially daring, get bacon as well. All burgers come with Bartley’s fries, which are as good as you’ll get in Boston. Like Brady himself, this burger is a champ. “I don’t think I could take it off the menu even if I wanted,” says general manager Bill Bartley. “He’s a great guy and a great football player and role model.”

“The only burger more popular than the Tom Brady is our Viagra burger. Even Brady isn’t better than Viagra.”

Enter to win a pair of tickets to attend The Hess Collection Seminar and Dinner as part of Boston Wine Festival 2018 at the Boston Harbor Hotel on Wednesday, March 14th. END_OF_DOCUMENT_TOKEN_TO_BE_REPLACED

Wednesday is Food Day, after all. END_OF_DOCUMENT_TOKEN_TO_BE_REPLACED

It’s been a crazy week with all the snow. We need a drink. END_OF_DOCUMENT_TOKEN_TO_BE_REPLACED

Amazing sandwiches for a good cause? Make a bunch for us! END_OF_DOCUMENT_TOKEN_TO_BE_REPLACED

And they came to our studios, too! END_OF_DOCUMENT_TOKEN_TO_BE_REPLACED

It’s almost time send off 2017 and welcome in 2018, and we have some ideas about how you can do precisely that. END_OF_DOCUMENT_TOKEN_TO_BE_REPLACED

The pics alone will make you want to make a reservation. END_OF_DOCUMENT_TOKEN_TO_BE_REPLACED

Some people love cooking for the holidays. Others, not so much. END_OF_DOCUMENT_TOKEN_TO_BE_REPLACED

There’s so many to keep track of, you might have missed this one. END_OF_DOCUMENT_TOKEN_TO_BE_REPLACED