SNL in Review: How ‘Billy Madison’ Launched an Empire 20 Years Ago 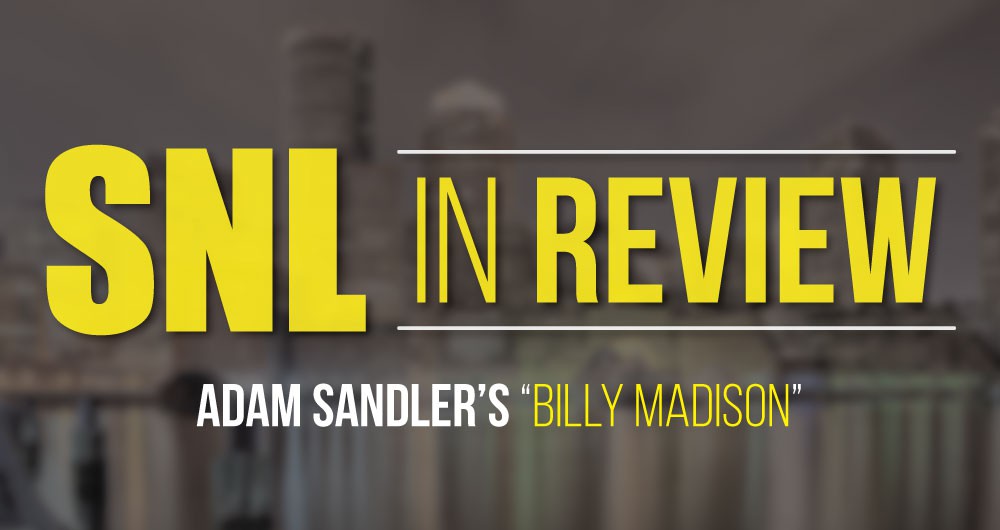 During his 2014 media blitz for Inherent Vice, director Paul Thomas Anderson spoke affectionately on “The Denise Show,” an early ’90s SNL skit featuring Adam Sandler. The sketch is classic Sandler– featuring the performer as a damaged TV host, recovering from the pain of a recent breakup.

One minute, Sandler is harmless, charming even… the next he’s “screaming, and his eyes go black,” in the words of Anderson.

The last “Denise Show” aired in March ’94, weeks before shooting began on what was Sandler’s first starring role. The film was Billy Madison, a raw, silly, punk rock thesis statement which drew on Sandler’s quasi sociopathic persona. He’d honed his anti-comedy with oddball skits like “The Denise Show,” and undoubtedly co-wrote Billy Madison in a bid to translate that sensibility to film.

Billy Madison, which turns 20 this week, became the basis for a long, profitable career for Sandler, who remains one of Hollywood’s box office draws (more or less). Arguably, he perfected the Sandler role best in 1996’s Happy Gilmore. But it’s in Billy Madison that you see him assembling all the pieces for his onscreen empire.

Today, films produced by Sandler have grossed over $2.5 billion at the box office. But how could an inconsequential film like Billy Madison, about a spoiled man-child going back to grade school, result in one of Hollywood’s few non-Marvel Comic franchises? The answer is in the way Sandler evokes the weird, cartoon logic of comics, building on the tropes first begun in Billy Madison.

As a character, Billy is Proto Sandler: laidback but prone to sudden fits of anger. In later films, the character would be presented as a guy’s guy – the kind of buddy you’d grab a beer with and listen to Styx. As Billy Madison kicks off, however, he needs a bit of toughening up; he’s the son of privilege, whose father is no less than Mike Hammer himself, Darrin McGavin. (Also known as the old man from A Christmas Story.)

It’s as if Billy Madison is codifying the unpolished Sandler – previously seen on SNL –turning him into the durable movie staple in later (safer) comedies like Big Daddy and The Waterboy. On a meta level, Billy Madison sees its protagonist graduate… while letting its star succeed on a level rivaled by few comedians, ever.

Billy Madison is at its best when the comedy feels loose and anarchic. And, unlike Happy Madison’s recent output, the film feels strangely deliberate in its stupidity –a devil-may-care attitude toying with what’s conventionally funny. The ’90s were a place for high concept comedies – Eddie Murphy and Mike Myers in fat suits, Jim Carrey possessed with magic powers. And then there’s Sandler, smirking weird lines like “That’s assault, brotha” and “Stop looking at me, swan.”

With his goofy delivery, and deep-seeded anger, Sandler was tapping into the angst of disaffected suburban teenage males – think Jackass or early Eminem, less Robin Williams.

One of the comedy’s best moments involves the menacing O’Doyle clan, cartoonish tormentors to Billy who punctuate their abuse with the celebratory “O’Doyle Rules!” In Sandler and co-writer Tim Herlihy’s surreal movie universe, the attacks are arbitrary… as is the family’s eventual comeuppance. In a movie like Billy Madison, justice is doled out eventually, in characteristically strange fashion.

Sandler anchors all this with youthful abandon, in contrast to the hazy indifference seen today, years after his brand became an industry.

Like now, Sandler surrounds himself with an assortment of silly co-stars, most of whom had been colleagues on SNL. Chris Farley has a brief but memorable role as the school bus driver (“Good, great, GRAND, WONDERFUL!”). Former Weekend Update anchor, the deadpan Norm Macdonald plays one of Billy’s slacker pals. And Norm’s Update co-writer Jim Downey is responsible for Billy Madison’s most memorable moment:

Such are the quirky hallmarks of an Adam Sandler film: Steve Buscemi and girls with the name V. You can see why this quixotic universe –positing Sandler as a misunderstood underdog—would eventually grow stale, sending the actor into more dramatic fare. Ironically, the most successful role Sandler ever mastered was in PT Anderson’s Punch-Drunk Love, a serio-comic adaptation of the Sandler character. (At the time, the project was rumored to actually be an adaptation of “The Denise Show,” fittingly.)

This Sunday is #SNL40, the 40th anniversary special for Saturday Night Live. Sandler remains an outlier in the show’s history, particularly among the list of attending former cast members. Never an impressionist, he wasn’t right for political or pop culture roles better suited for Dana Carvey or Phil Hartman. He lacked Mike Myers’ knack for characters, or even David Spade’s biting sass.

Still, as PT Anderson rightly observed, there was something dangerous and compelling about Sandler in his prime. It was this oddness that makes Billy Madison a success, and defined the comedian’s best work.

Golden Globe and Emmy nominee Benjamin Wallfisch is the composer responsible for the score of the hit movie IT. I talked to Ben about his approach to scoring the new version of this iconic story and his thoughts on film and music overall. Some very insightful commentary; listen in. END_OF_DOCUMENT_TOKEN_TO_BE_REPLACED

Rupert Gregson-Williams is an award-winning film composer. He just so happened to compose the score for this summer’s big blockbuster Wonder Woman. We talked about his beginnings in film scoring, film scores that move and inspire him and, of course, Wonder Woman. END_OF_DOCUMENT_TOKEN_TO_BE_REPLACED

Jeff Rapsis is a New England-based composer and performer. Lately, he’s been creating live musical scores for silent film screenings. I talked to him about his process and a few of his upcoming performances at The Capitol Theatre in Arlington and the Somerville Theatre. You can keep track of where else Jeff is scoring silent films here. END_OF_DOCUMENT_TOKEN_TO_BE_REPLACED

Planning on seeing Rogue One: A Star Wars Story when it opens this weekend? I joined Adam 12 to give you an idea of what to expect. But don’t worry, I didn’t give anything away. END_OF_DOCUMENT_TOKEN_TO_BE_REPLACED

No, not from afar, from the comfort of her couch. From the actual awards themselves. That’s where Meredith Goldstein was for the Oscars. She shared all the juicy, first-hand details with me. END_OF_DOCUMENT_TOKEN_TO_BE_REPLACED

To celebrate the opening of ‘The Force Awakens,’ I had some very special guests in studio to start the Thursday, December 17 edition of The Brink. Listen. END_OF_DOCUMENT_TOKEN_TO_BE_REPLACED

Watching the new Star Wars trailer a million times gave us all sorts of feels. And one of those feels was nostalgia. END_OF_DOCUMENT_TOKEN_TO_BE_REPLACED

Kevin Slane was in 6th grade in the year 2000. I was starting my radio career in the year 2000, peddling the sounds of Limp Bizkit and the like. So we decided to try and stump one another with some alt-rock sounds from that year. Listen in and feel free to play along. END_OF_DOCUMENT_TOKEN_TO_BE_REPLACED