SNL in Review: 10 Years Ago, How ‘Fever Pitch’ Sent Jimmy Fallon Back to TV 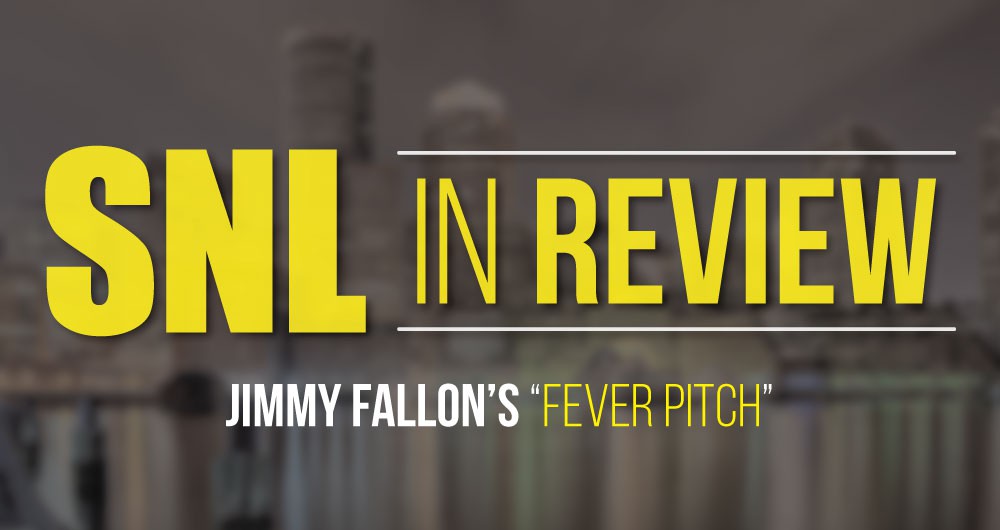 With Boston again afflicted with Red Sox Fever – a seasonal condition common here in New England –fans are once more flocking to the Mount Rushmore of Baseball flicks. This great pantheon of sports films invariably includes genuine classics (Bull Durham, 1988), and kids movies seeped in nostalgia (The Sandlot, 1994). Old school fans are popping in their VHS copies of Fear Strikes Out (1957).

Overlooked in this annual ode to the national pastime is one film that – on paper – looked like a surefire winner when it came out ten years ago this month. Directed by the Farrelly Brothers, Fever Pitch had a pedigree for success: a charming romantic lead in Drew Barrymore, a plot based on a novel from Nick Hornby (who also penned About a Boy), and a ripped-from-the-headlines setting, released months after the first Red Sox World Series in 86 years.

And, more importantly, the film starred a young comic with a warm demeanor and talent to spare: Jimmy Fallon.

After six seasons on Saturday Night Live, the Weekend Update anchor- known for his impressions and tendency to break during skits– was itching for a new terrain to explore. Cameron Crowe’s critically acclaimed Almost Famous (2000) demonstrated his chops for character work. Now Fever Pitch – like his 2004 vehicle, Taxi – gave Fallon a chance at translating his endearing persona to silver screen stardom.

Of course, the Gods had another fate in mind for Fallon, as both Fever Pitch and Taxi underwhelmed at the box office. After a brief period in the wilderness, Fallon reemerged in 2009 as an ingratiating, enthusiastic component of late night television. Now the host of The Tonight Show, he’s succeeded in injecting a fresh brand of viral comedy to the legendary franchise. 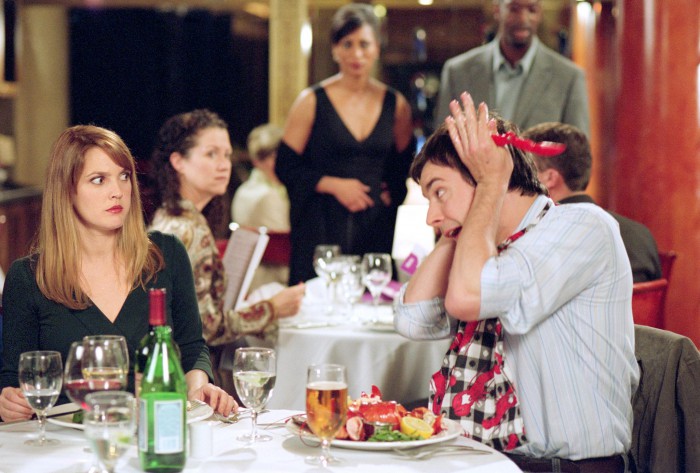 While it seems Fallon’s strengths are best suited for television, Fever Pitch offers a glimpse at what Jimmy Fallon, Movie Star might have looked like. The film, like Jay Leno’s Collision Course before it, represents an alternate path – a what–could-have-been – for a member of an exclusive television club.

Particularly with Fallon’s character, Ben Wrightman, Fever Pitch adheres to the conventions laid out in the woefully slept-on romantic comedy spoof, They Came Together (2014). In that film, Fallon’s Weekend Update cohort Amy Poehler sums up the typical romcom leading man: “He’s handsome, but in a non-threatening way… Vaguely but not overtly Jewish.”

That apt description sums up Fallon here, a slightly inauthentic variation of a Massachusetts-bred member of Red Sox Nation.

Specifically, Ben Wrightman is a composite of Fallon’s SNL character, the Nomar-obsessed Sully, fused with the “lovable goof” persona honed by Adam Sandler in films during the previous decade. Unlike most of Sandler’s characters, however, Fallon’s Wrightman is successful, a beloved schoolteacher –on paper a “catch” for Drew Barrymore’s workaholic corporate love interest, Lindsey. (Outside the United States, Fever Pitch was marketed under the new title The Perfect Catch, a punny reference to Wrightman).

His one flaw, of course: an obsession with his treasured Red Sox, which ultimately complicates his romance with Lindsey. The contrast between Ben the romantic and Ben the passionate fan plays to Fallon’s propensity toward giddy enthusiasm, a hallmark of his tenure on late night. Still, this lack of edge – unlike, say, Bill Murray’s deadpan superiority, or even Sandler’s rage – drowns Fallon. His willingness to please is what makes him a successful television host… and a lightweight movie star. 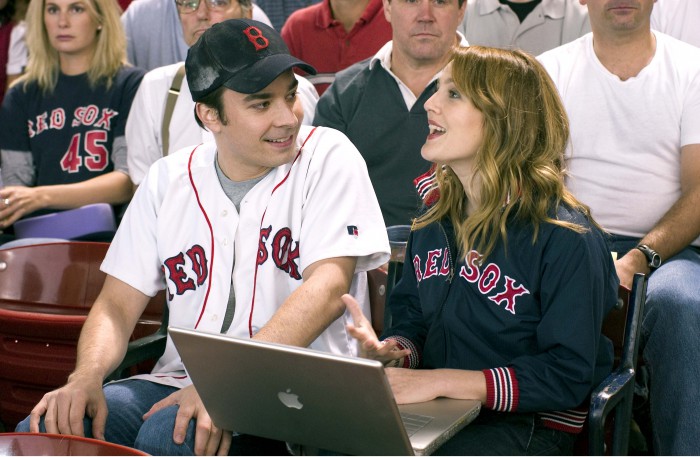 Just as They Came Together’s stars (emphatically) position New York City as a character in the story of their main characters’ romance, so does Fever Pitch claim Boston. Released in 2005, the film arrived in the midst of Hollywood’s fascination with Boston as the location for most of their non-New York and Los Angeles set projects.

Unfortunately, and despite the Farrelly Brothers obvious familiarity with the city – they grew up outside Providence – Fever Pitch lacks the wry humor seen in Boston classics like The Departed (2006) or Good Will Hunting (1997). Ben Wrightman may claim to be a native, but everything about him (even down to his too-swanky-for-a-teacher loft) screams Yuppie interloper.

For these reasons, the entire film feels second rate. Barrymore is usually adequate in her duties as the love interest; see her multiple films with Adam Sandler. Here, however, there’s a distinct lack of chemistry between her and Fallon, undercutting the film’s central plot point. Likewise, Fever Pitch fails to replicate the genuine sweetness of the Farrelly Brother’s own There’s Something About Mary (1998), their previous romantic comedy which manages to be truly hilarious (featuring Ben Stiller in the role as well-intentioned romantic lead).

Still, Fever Pitch is a touchstone for Red Sox fans, particularly for its prescient capturing of the 2004 playoff run, the team’s first championship since 1918. (Several months ago, the Farrelly Brothers and Barrymore joined Fallon on his show to reminisce fondly about the production, which culminated in the movie’s characters joining the team for their post-championship on-field celebration.) Few films have ever been so in sync with the subject matter they’re depicting.

Given that, it’s a marvel Fever Pitch failed to connect with audiences – perhaps sensing a charisma gap, Fallon soon shifted his attention back to television.

In hindsight, watching Fallon in Fever Pitch -or Jon Stewart in The Faculty– is just off-putting, given how entrenched their personalities exist in pop culture. They aren’t actors; they’re themselves, entertainers who survive as friendly, nightly presences in the American household.

Late night hosts in feature films are a rare find, especially when portraying a fictional character, not themselves. While movies often resort to monologues from the likes of Conan O’Brien to comment on their plots, less common are wonderful oddities like Cabin Boy, which features David Letterman in a brief role as the man Chris Elliot meets in the fishing village. With that in mind, a dud like Fever Pitch must be embraced, in spite of its weaknesses.

Golden Globe and Emmy nominee Benjamin Wallfisch is the composer responsible for the score of the hit movie IT. I talked to Ben about his approach to scoring the new version of this iconic story and his thoughts on film and music overall. Some very insightful commentary; listen in. END_OF_DOCUMENT_TOKEN_TO_BE_REPLACED

Rupert Gregson-Williams is an award-winning film composer. He just so happened to compose the score for this summer’s big blockbuster Wonder Woman. We talked about his beginnings in film scoring, film scores that move and inspire him and, of course, Wonder Woman. END_OF_DOCUMENT_TOKEN_TO_BE_REPLACED

Jeff Rapsis is a New England-based composer and performer. Lately, he’s been creating live musical scores for silent film screenings. I talked to him about his process and a few of his upcoming performances at The Capitol Theatre in Arlington and the Somerville Theatre. You can keep track of where else Jeff is scoring silent films here. END_OF_DOCUMENT_TOKEN_TO_BE_REPLACED

Planning on seeing Rogue One: A Star Wars Story when it opens this weekend? I joined Adam 12 to give you an idea of what to expect. But don’t worry, I didn’t give anything away. END_OF_DOCUMENT_TOKEN_TO_BE_REPLACED

No, not from afar, from the comfort of her couch. From the actual awards themselves. That’s where Meredith Goldstein was for the Oscars. She shared all the juicy, first-hand details with me. END_OF_DOCUMENT_TOKEN_TO_BE_REPLACED

To celebrate the opening of ‘The Force Awakens,’ I had some very special guests in studio to start the Thursday, December 17 edition of The Brink. Listen. END_OF_DOCUMENT_TOKEN_TO_BE_REPLACED

Watching the new Star Wars trailer a million times gave us all sorts of feels. And one of those feels was nostalgia. END_OF_DOCUMENT_TOKEN_TO_BE_REPLACED

END_OF_DOCUMENT_TOKEN_TO_BE_REPLACED

If you’ve finally finished crying over Inside Out — or Lava, the short that ran before it — Pixar is readying another assault on your tear ducts with The Good Dinosaur, if its newly released trailer is any indication. END_OF_DOCUMENT_TOKEN_TO_BE_REPLACED