SNL in Review: 20 Years Later, How ‘Tommy Boy’ Captures Its Cast In Time 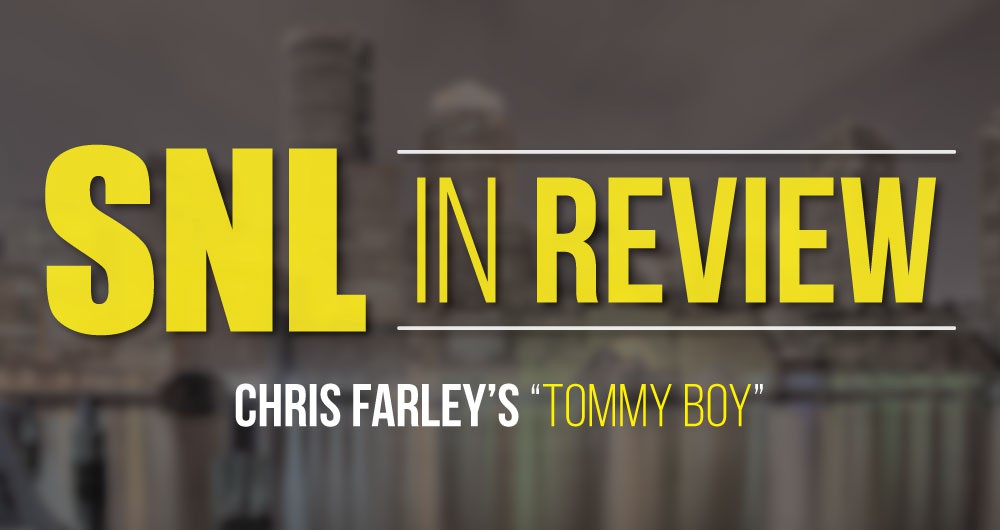 At the end of Planet Waves, Bob Dylan sings “Time is all I have to give/ you can have it if you choose.” That’s always seemed like an apt description for the relationship between a film and its audience. When you commit to watching a movie, you’re agreeing to forfeit a small fraction of your life. And the filmmakers themselves – they’re bound, as well. Whoever they were when they made a movie, wherever they were in their lives, the film preserves those moments for posterity.

I thought about this when I recently watched Tommy Boy, which turns 20 this week, on Netflix.

A quintessential, almost tragically sweet-natured film, Tommy Boy captures its main cast in a very specific period in their careers. For many of its stars – Chris Farley, Rob Lowe, David Spade, Dan Aykroyd– this well-intentioned mid-’90s comedy represents a crossroads in their film work. In some ways, it was a high water mark.

Moreover, Tommy Boy is a snapshot of the gentle comedies made by Lorne Michaels and Paramount Pictures in the early-mid years of the decade. Usually written by husband-wife team Bonnie and Terry Turner, these films focused on characters coping with life in Midwestern middle class.

Its simplicity and relatability, however, is what makes the film timeless.

Released as the first vehicle for SNL cast member Chris Farley, Tommy Boy was produced by Lorne Michaels, then committed to following up the surprise success of 1992’s Wayne’s World. Farley had a minor role in that film, as well as 1993’s Coneheads, also produced by Michaels.

To pen Tommy Boy, Michaels and Farley reunited with the co-writers of both Wayne’s World and Coneheads – Bonnie and Terry Turner (who later made That 70’s Show). Like those scripts, Tommy Boy is clever yet comfortable, telling a story about (albeit, funny) people in Middle America and their problems.

Tommy Callahan (Farley) lacks superpowers, or some massive gimmick driving the film’s plot/humor. He’s an overgrown kid, not particularly bright. At the same time, he’s good natured, a proud son. It’s a perfect role for Farley, who basks in both Tommy’s warmth, and tendency toward pratfalls and physical comedy. More than even SNL sketches like The Chris Farley Show or Matt Foley, Tommy Boy defines what made Farley such a unique performer, and why he remains engrained in the public imagination 18 years after his death.

After all, Tommy Boy’s status as a modern classic mandates Farley and his character perfectly sync. They do.

Farley also reunited with Wayne’s World co-star Rob Lowe, who plays Tommy Boy’s smarmy villain/stepbrother, Paul. After spending the ’80s as a member of the Brat Pack, Lowe found his career adrift following a pre-Kim/Pam Anderson/Paris Hilton sex tape scandal, where he was caught in dalliance with a teenage girl. His career in jeopardy, Lowe turned to Wayne’s World, proving his funny bona fides. With Tommy Boy, he affirmed his knack for comedy, demonstrating his versatility and paving the way with later roles in Austin Powers and Parks & Rec (not to mention his current stint as the spokesman for DIRECTV).

With Lowe’s Paul, and his partner/lover/stepmother Beverly (Bo Derek) threatening the livelihood of the town’s working class, Tommy must overcome his shortcomings and save Callahan Auto Parts. Surprisingly, Tommy Boy spends a good portion of its first act detailing the importance of blue collar workers to Tommy and his dad (Brian Dennehy). It never feels out of place tonally, while at the same time raising still-relevant questions about what exactly is happening to companies like Callahan Auto Parts across the country.

Of course, Tommy enlists Richard (David Spade) in his efforts to save the company. The pairing of Farley & Spade –their dichotomy in size and temperament – was an old school matchup, a modern version of previous teams like Abbott & Costello. Spade brings his usual smugness to the part, previously seen in 1994’s PCU and SNL segments like Total Bastard Airlines and Hollywood Minute. However, his attitude feels understandable in Tommy Boy, humanizing an often mean-spirited persona. Richard grew up without a family and, through hard work, established himself at Callahan. With just a hint of backstory, Spade’s Richard is reasonably annoyed at Farley’s Tommy, his exact opposite. Spade’s never been better (Sorry Joe Dirt fans).

Finally, SNL legend Dan Aykroyd pops up as auto part competitor Ray Zalinsky. Aykroyd was transitioning out of lead roles after a decade headlining classic ’80s comedies like The Blue Brothers and Trading Places. Obtaining an Oscar nomination for 1989’s Driving Miss Daisy, he briefly succeeded in fare like My Girl. Tommy Boy showed him returning to smaller character parts and, on a meta level, passing the baton from his era to the next generation of SNL film stars.

(In Tommy Boy, he is in typical fast talking salesman mode, a role he first perfected during the first season of Saturday Night Live in his Bass-o-matic sketch).

At a slender 97-minutes, Tommy Boy is a light-hearted treat neatly showing its filmmakers (Michaels, the Turners, Farley, etc.) in their prime. The secret to its longevity is Farley, who instantly endears himself, single-handedly harnessing a surprising love letter to working class values.

By the film’s end, Tommy has discovered untapped skills, saving the company. Adored by all, he is the film’s hero. Through his dynamic comedic performance, Farley briefly accomplishes the same thing. It’s a fleeting triumph, one Tommy Boy joyfully documents.

Golden Globe and Emmy nominee Benjamin Wallfisch is the composer responsible for the score of the hit movie IT. I talked to Ben about his approach to scoring the new version of this iconic story and his thoughts on film and music overall. Some very insightful commentary; listen in. END_OF_DOCUMENT_TOKEN_TO_BE_REPLACED

Rupert Gregson-Williams is an award-winning film composer. He just so happened to compose the score for this summer’s big blockbuster Wonder Woman. We talked about his beginnings in film scoring, film scores that move and inspire him and, of course, Wonder Woman. END_OF_DOCUMENT_TOKEN_TO_BE_REPLACED

Jeff Rapsis is a New England-based composer and performer. Lately, he’s been creating live musical scores for silent film screenings. I talked to him about his process and a few of his upcoming performances at The Capitol Theatre in Arlington and the Somerville Theatre. You can keep track of where else Jeff is scoring silent films here. END_OF_DOCUMENT_TOKEN_TO_BE_REPLACED

Comedian Myq Kaplan is a comedian named Myq Kaplan. He joined me in studio this afternoon, and he’s at Laugh Boston this weekend. Click here for tickets. END_OF_DOCUMENT_TOKEN_TO_BE_REPLACED

Planning on seeing Rogue One: A Star Wars Story when it opens this weekend? I joined Adam 12 to give you an idea of what to expect. But don’t worry, I didn’t give anything away. END_OF_DOCUMENT_TOKEN_TO_BE_REPLACED

My goodness, I love Sue Costello. It was great having her back in studio today to talk about her one-woman show, #IAmSueCostello, playing tonight at the Revere Hotel. Click here for tickets. END_OF_DOCUMENT_TOKEN_TO_BE_REPLACED

Trump Takes On…Boston! is running now through election night at Laugh Boston. David Carl was back in studio this afternoon to talk about bringing Donald Trump to the stage, the cathartic element (for both him and the audience) and how audiences have been reacting so far. END_OF_DOCUMENT_TOKEN_TO_BE_REPLACED

Trump Takes On…Boston! has arrived at Laugh Boston. I had comedian David Carl, who is portraying Trump, in studio this morning to talk about the show. END_OF_DOCUMENT_TOKEN_TO_BE_REPLACED