To paraphrase Shakespeare, we are all time’s subjects, at mercy to its whims. One of time’s assurances is its ability to give perspective through its constant measure.

Take the curious matter of “Houseguest,” released twenty years ago this week. Time was on my mind during a recent viewing of the sophomoric family comedy, which paired the late, great Phil Hartman with Sinbad. In the two decades since the film’s release, time has provided a critical question regarding the film: how did we ever let Sinbad star in a major motion picture? And, at the same time, how did we ignore Hartman’s potential as a bona fide comedy film star?

As Grantland’s SNL showdown last summer revealed, Hartman today is revered as a universal talent, one of the unsung contributors of “Saturday Night Live.”

Meanwhile: the then top-billed Sinbad is now seen as a bizarre cultural tramp stamp from the early-mid ’90s.

How could we have ever lived in an era when the New York Times was allowed to dismiss Hartman in their review of “Houseguest” while claiming that “Sinbad survives with his dignity and comic reputation intact.” Dignity? Comic reputation? 1995 must have been a strange place, indeed. With the benefit of hindsight, however, we see what the Times did not: it is Hartman who escapes unscathed, while “Houseguest” and Sinbad doomed to be recognized as hallmarks of an era that also lent Pauly Shore a national platform. Rewatching “Houseguest” only confirms what I’ve always suspected: Hartman would have made a startling film comedian.

But let’s step back. “Saturday Night Live” was also in an odd place in the mid-nineties. After a well-documented ’80s renaissance marshalled by the likes of Hartman and Dana Carvey, the show had transformed into a showcase for the punk rock comedy of “bad boys” like Adam Sandler and, later, Norm MacDonald. Buoyed by the success of “Wayne’s World,” it wasn’t long before the show’s core sprinted for Hollywood.

As a surviving member from the ’80s Dream Team, Hartman was the show’s popular elder statesman, particularly with his pre-Darrell Hammond Clinton impersonation. By the time he left in 1994, his career possibilities seemed limitless. Both Garry Shandling and Jay Leno considered him for spots on their shows. NBC was mulling a variety show spinoff involving him, as well.

When neither manifested, Hartman was faced with two options: situational comedy (he appeared on “Newsradio” until his death), and a film career. If contemporaries Mike Myers, Dana Carvey and even Jon Lovitz found Hollywood success, why couldn’t he?

He was right to think he could make the transition. He’d co-written 1985’s “Pee Wee’s Big Adventure” with Groundlings collaborator Paul Reubens, the film that launched Tim Burton. And like SNL co-stars Chris Farley and Adam Sandler, Hartman had spent the decade appearing in small comedic parts in other people’s films: “So I Married an Axe Murderer” with Myers, “CB4” with Chris Rock, “Coneheads” with Dan Aykroyd.

Each film showed Hartman’s knack for character work, and his role as the paternal figure in many SNL sketches made his casting as Gary Young in “Houseguest” a natural fit. 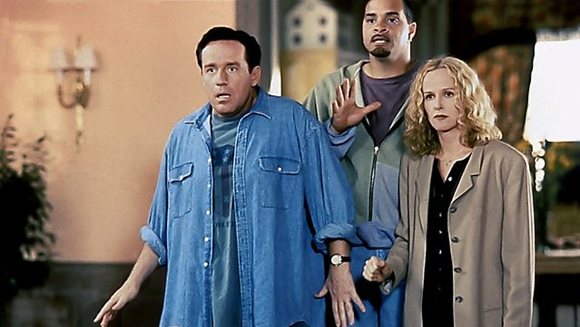 Hartman’s Gary is a good natured fool, an oblivious but well-meaning yuppie. Hartman’s grasp of the character can neatly be boiled down to Gary’s pompous laugh, and Cheshire cat grin, which he uses in many of the film’s reaction shots. After all, he’s playing second banana to Sinbad, who dominates the physical comedy. Watch Hartman’s smug but encouraging looks to his supposed friend are like seeing a live action Troy McClure—much of his work in the film utilizes the patented smarm that made his work on “Newsradio” and especially “The Simpsons” so memorable. “Houseguest” never ventures from even the broadest of cartoon scenarios.

Of course, in a year when both Sandler and Farley crafted modern comedy classics, “Houseguest” finished 68th in domestic box office. It joined other 1995 fare like “Major Payne” as the kind of midday filler you might find on cable when staying home sick from school. Hartman never starred in another film.

Some may say that Hartman never translated well for the movies. That the failure of “Houseguest” proved he lacked the necessary star wattage of, say, Bill Murray or Eddie Murphy. On the contrary, if the likes of Dan Aykroyd and even Martin Short were allowed multiple occasions to headline a movie, Hartman deserved better than co-headlining what was marketed as a “HouseSitter” knock-off.

Moreover, I think Hartman’s impressive range (displayed here in his SNL audition tape) would have made him well-suited for darker character work. His emerging persona – the self-satisfied EveryMan, solidified by his work in “Houseguest” — was a strong foundation better suited for dark comedy. Think Tom Arnold’s work in Don Roos’ “Happy Endings,” or even Robin Williams in films like “World’s Greatest Dad.”

That’s the biggest reason to watch “Houseguest”: it’s the one chance to see a bona fide comedy maestro during his single shot at cinematic stardom. Phil Hartman never got to follow up this now 20-year-old film, let alone try something darker on screen. His time was cut short far too early.

Golden Globe and Emmy nominee Benjamin Wallfisch is the composer responsible for the score of the hit movie IT. I talked to Ben about his approach to scoring the new version of this iconic story and his thoughts on film and music overall. Some very insightful commentary; listen in. END_OF_DOCUMENT_TOKEN_TO_BE_REPLACED

Rupert Gregson-Williams is an award-winning film composer. He just so happened to compose the score for this summer’s big blockbuster Wonder Woman. We talked about his beginnings in film scoring, film scores that move and inspire him and, of course, Wonder Woman. END_OF_DOCUMENT_TOKEN_TO_BE_REPLACED

Jeff Rapsis is a New England-based composer and performer. Lately, he’s been creating live musical scores for silent film screenings. I talked to him about his process and a few of his upcoming performances at The Capitol Theatre in Arlington and the Somerville Theatre. You can keep track of where else Jeff is scoring silent films here. END_OF_DOCUMENT_TOKEN_TO_BE_REPLACED

Comedian Myq Kaplan is a comedian named Myq Kaplan. He joined me in studio this afternoon, and he’s at Laugh Boston this weekend. Click here for tickets. END_OF_DOCUMENT_TOKEN_TO_BE_REPLACED

Planning on seeing Rogue One: A Star Wars Story when it opens this weekend? I joined Adam 12 to give you an idea of what to expect. But don’t worry, I didn’t give anything away. END_OF_DOCUMENT_TOKEN_TO_BE_REPLACED

My goodness, I love Sue Costello. It was great having her back in studio today to talk about her one-woman show, #IAmSueCostello, playing tonight at the Revere Hotel. Click here for tickets. END_OF_DOCUMENT_TOKEN_TO_BE_REPLACED

Trump Takes On…Boston! is running now through election night at Laugh Boston. David Carl was back in studio this afternoon to talk about bringing Donald Trump to the stage, the cathartic element (for both him and the audience) and how audiences have been reacting so far. END_OF_DOCUMENT_TOKEN_TO_BE_REPLACED

Trump Takes On…Boston! has arrived at Laugh Boston. I had comedian David Carl, who is portraying Trump, in studio this morning to talk about the show. END_OF_DOCUMENT_TOKEN_TO_BE_REPLACED