I’d call my relationship with food average. I have never been the type to shop exclusively at Whole Foods, to frequent food blogs or spend much time thinking about locally sourced kale. I don’t abide by any particular diet. I probably eat more GMO’s than I’d care to think about.

But I’m not the type to hit McDonald’s on the regular. In fact, I went roughly a decade avoiding fast food entirely. I love vegetables, fresh fruit and more often than not, tend towards the whole wheat side of life. At 23, my body actually prefers healthier options. You say tomato, I say hell yeah.

But not when I’ve been drinking. I’m no scientist, but I can tell you that even the tiniest drop of alcoholic variable turns my stomach into some kind of insatiable monster. As a freshman in college, it took three shots of vodka before I stole a pint of ice cream from the freezer of some stranger’s apartment. I remember the ice cream having freezer burn, and that I ate it with a fork.

I’ve eaten hot dogs from the Model Cafe in Allston (delicious), raw spaghetti (not so much) and fondant stripped from a wedding cake (pretty OK). Give me a glass of wine with a stale cheese plate. Give me a gin and tonic and a box of cereal, I’ll probably try to eat the toy inside. Just one beer and I start making rash decisions. I’m not the kind to drunkenly flirt with some stranger at the bar, but I’ll certainly be making eyes at a slice of amalfi from Bravo Pizza before 2 a.m on a Saturday.

In my boozy trials and tribulations, I’ve made a lot of food mistakes. And in the spirit of all things drunk and cheesy, I decided to make a few more last week. In a quick sweep of the Allston/Brighton area, I hit up a few local establishments to sample the bulk of their somewhat questionable plenty. My sweep ranged from recognizable franchise, to a smaller New England chain, to the ethnic food store around the corner from my apartment. I bought a bunch of junk to eat, and of course, tell you all about. I did all of this while drinking a 40 oz. You know, to keep the drunk theme alive. 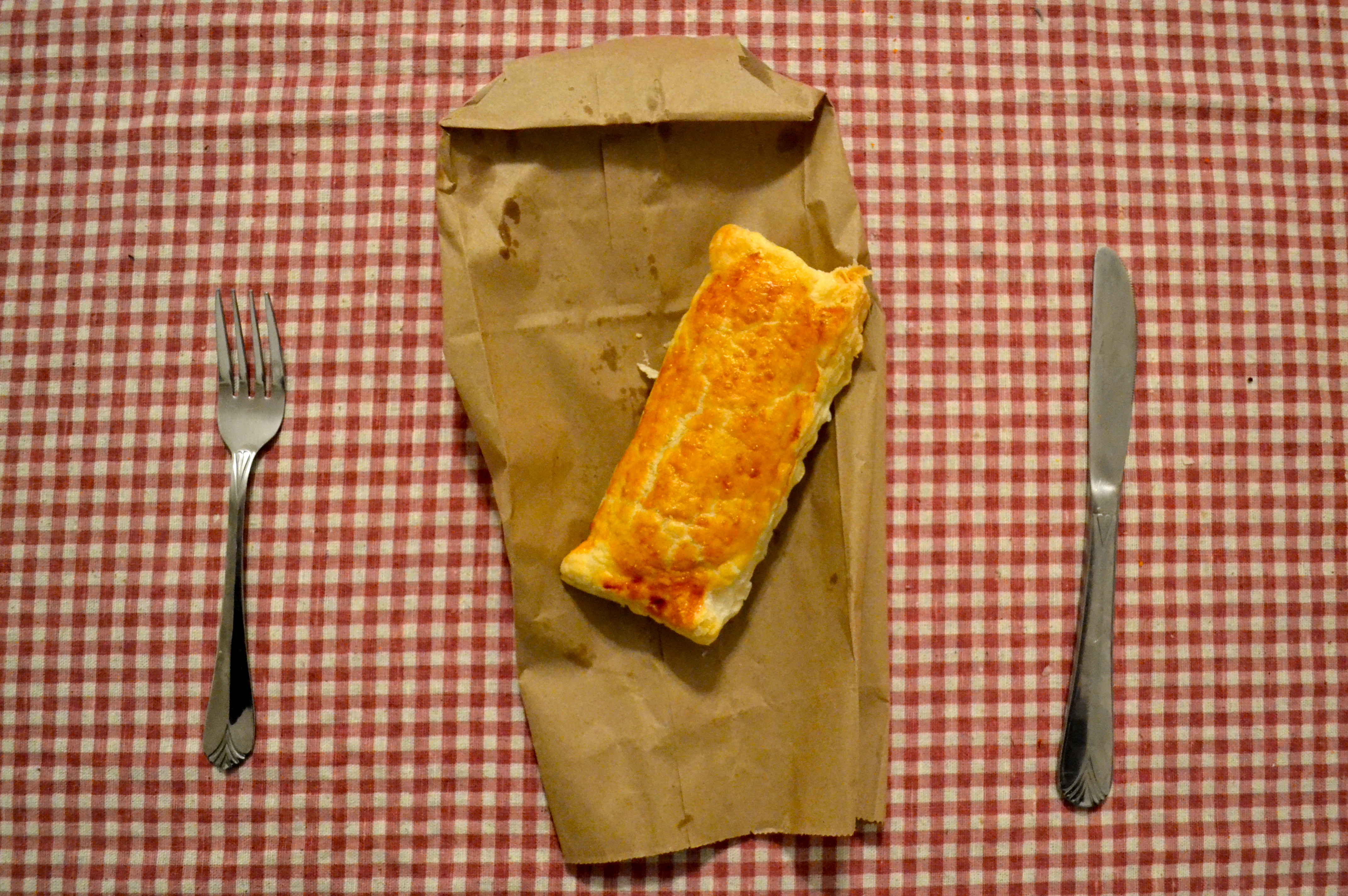 Read Babushka Deli’s Yelp reviews and you probably wouldn’t bother to shop there. But spend even a moment inside the store and you’ll find all sorts of Eastern European goodies. I usually stop at Babushka to scoop up a handful of Russian chocolates before, ahem, making my way to their liquor section. There’s a good half of the store I don’t set foot in, and it’s because I don’t know what anything is.

This time, I marched up to that half, their deli counter, with an “anything goes” mentality. As my eyes landed on a tray cellophane wrapped pastries in front of me, I knew I had found my target. An older woman approached me from behind the counter. Our conversation was as following:

Me: “Could I have one of these, please?” *points to the pastry*

Me: “Oh, the pastry comes with cabbage?”

What do you know? Turns out this was a pastry filled with cabbage. More specifically, a semi-cooked crust surrounding a filling which had a more jam-like texture than a leafy green one. The first bite was pretty OK, but a few more became a bit harder, as I realized the cabbage had an overly salted, rather slimy taste. Still though, it wasn’t that bad. The pastry itself was buttery, which of course is never a bad thing. And though strong, the cabbage’s saltiness went pretty well with my beer. And so I drank some more. 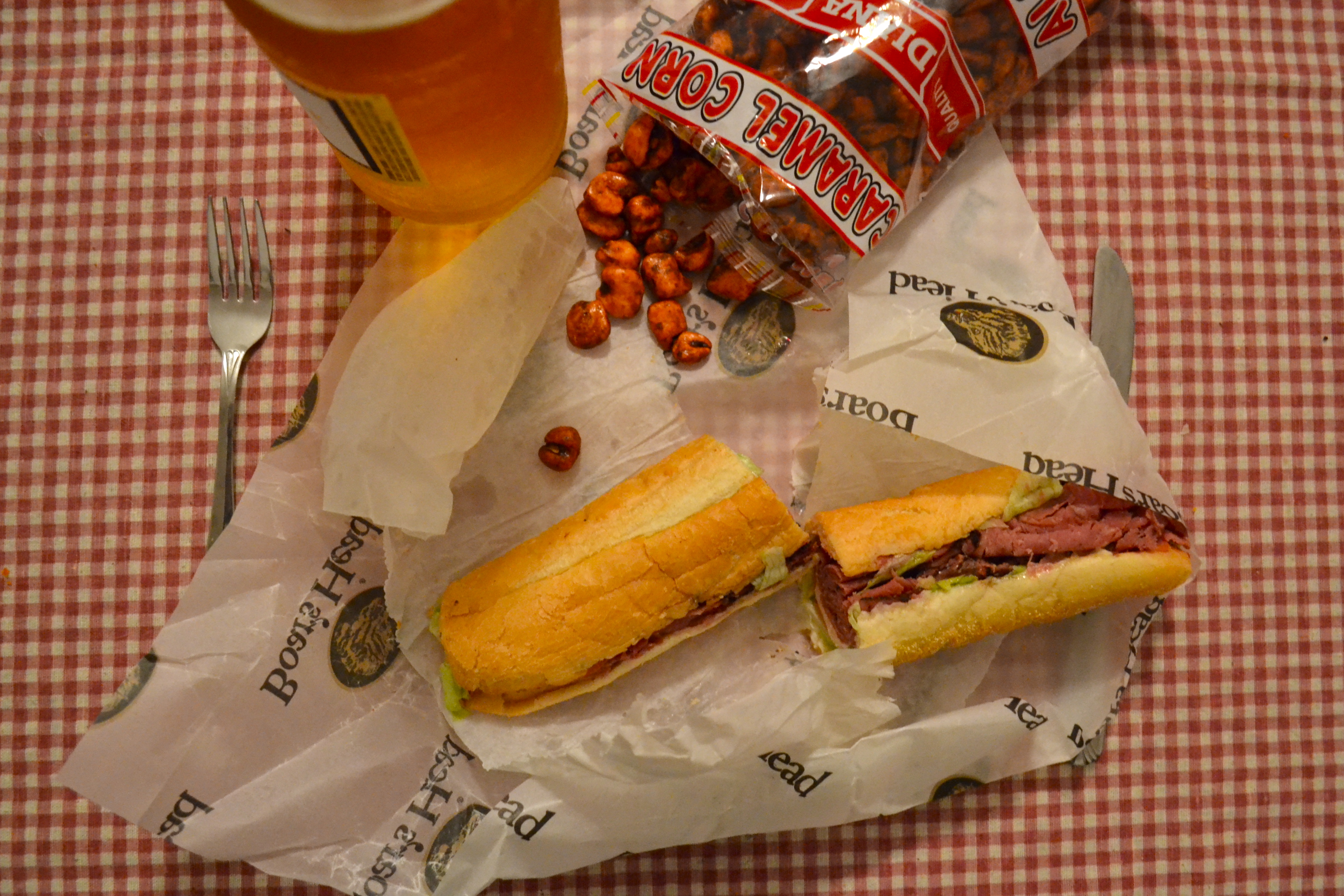 This stop happened on a whim. In the effort to round out the niche of local food stores, I hit Night Star for the sole purpose of its proximity to where I would soon pay $6 for potato salad and a sad joke from the clerk who’d ring me up. In what was my first experience of Night Star, I watched a bald man melt pastrami and cheese in a microwave before taking a lap around the aisles for a snack to complement my sandwich. I opted for a bag of Alboroto caramel corn, which looked nothing like Cracker Jack, and definitely didn’t include a prize. I went with my gut anyways, bought the sugary snack with my sandwich and went on my way to drunk food heaven.

This sub was delicious. I should have known it would be, especially after seeing the pastrami being sliced fresh from a block of deli meat. You can imagine my happiness at first bite into toasted sub roll, the meat still hot, the cheese all gooey, the lettuce wilted in just the right way. Also, this sandwich was just $5, which is roughly the equivalent of two and a half 7-Eleven hot dogs, but more on those later. The caramel corn was more of an afterthought, and honestly, tasted a lot like Corn Pops cereal. Which isn’t a bad thing by any means. Take Alboroto with milk and a spoon, and you, my friend, have breakfast. 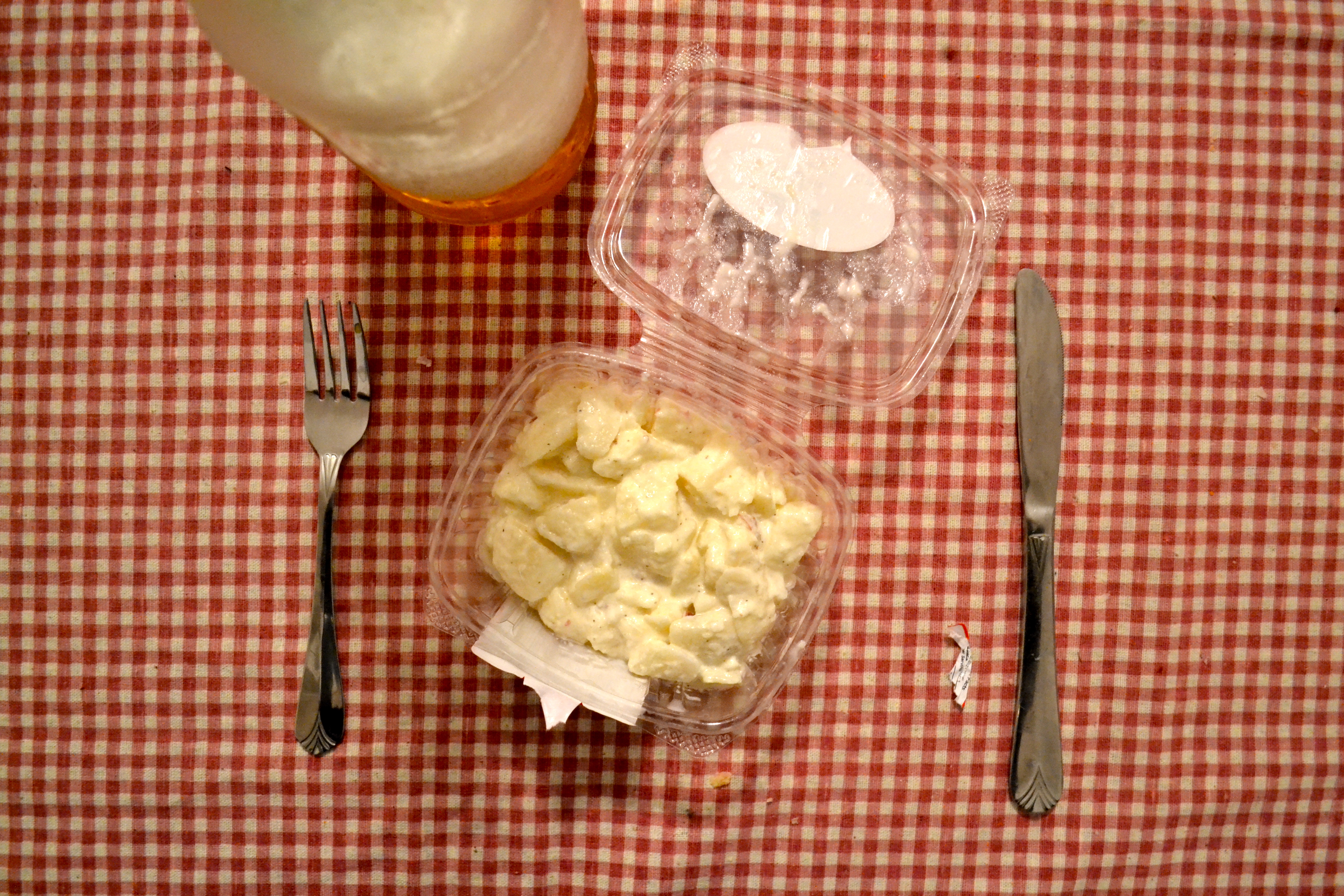 I could’ve done worse at Tedeschi. Have you seen their tuna sandwiches? Like some shitty convenience store Yin and yang, I looked to find a sense of balanced drunk choices at this locally-owned franchise. Here I bought my fruits and vegetables, kind of, to make up for the artery clogging trash I was planning on shoving into my face once I’d settled my goods back home.

To characterize this potato salad would be to label it as goop. With almost equal parts mayo to spud, this plastic tray of starch was a lot like anything you’d eat at a Legion Hall cookout. You know, the kind of potato salad bought in bulk to serve to large crowds on July 4 or at some awkward family reunion. We’ve all gone to these gatherings, and we’ve all eaten this questionable concoction, which frankly looks a whole lot more questionable than it actually tastes. Tedeschi’s take on tradition called for these tots to be severely overcooked. But when thinking of the classic potato salad, it was still pretty close to OK. I just don’t want to focus too much on this dish’s appearance, it makes me too sad. 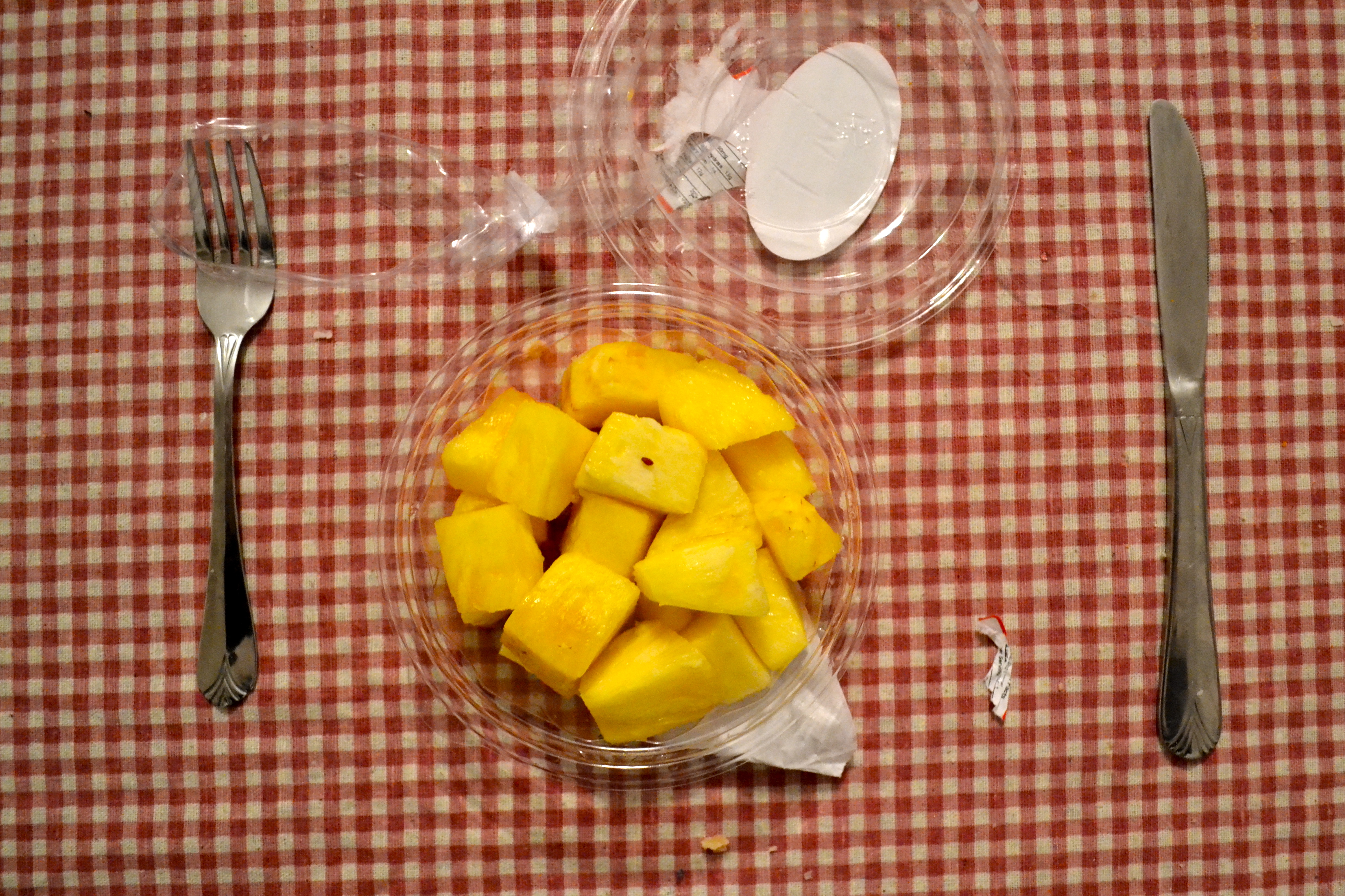 I know, I know, who’d look to a fruit cup as drunk food? For this one, I was thinking of the more health-conscious drunk folk, or hell, maybe a #vegan who’d had a bit too much of the dairy-free hard stuff. This fruit cup was pretty decent, though it still had the slightest chemical aftertaste. 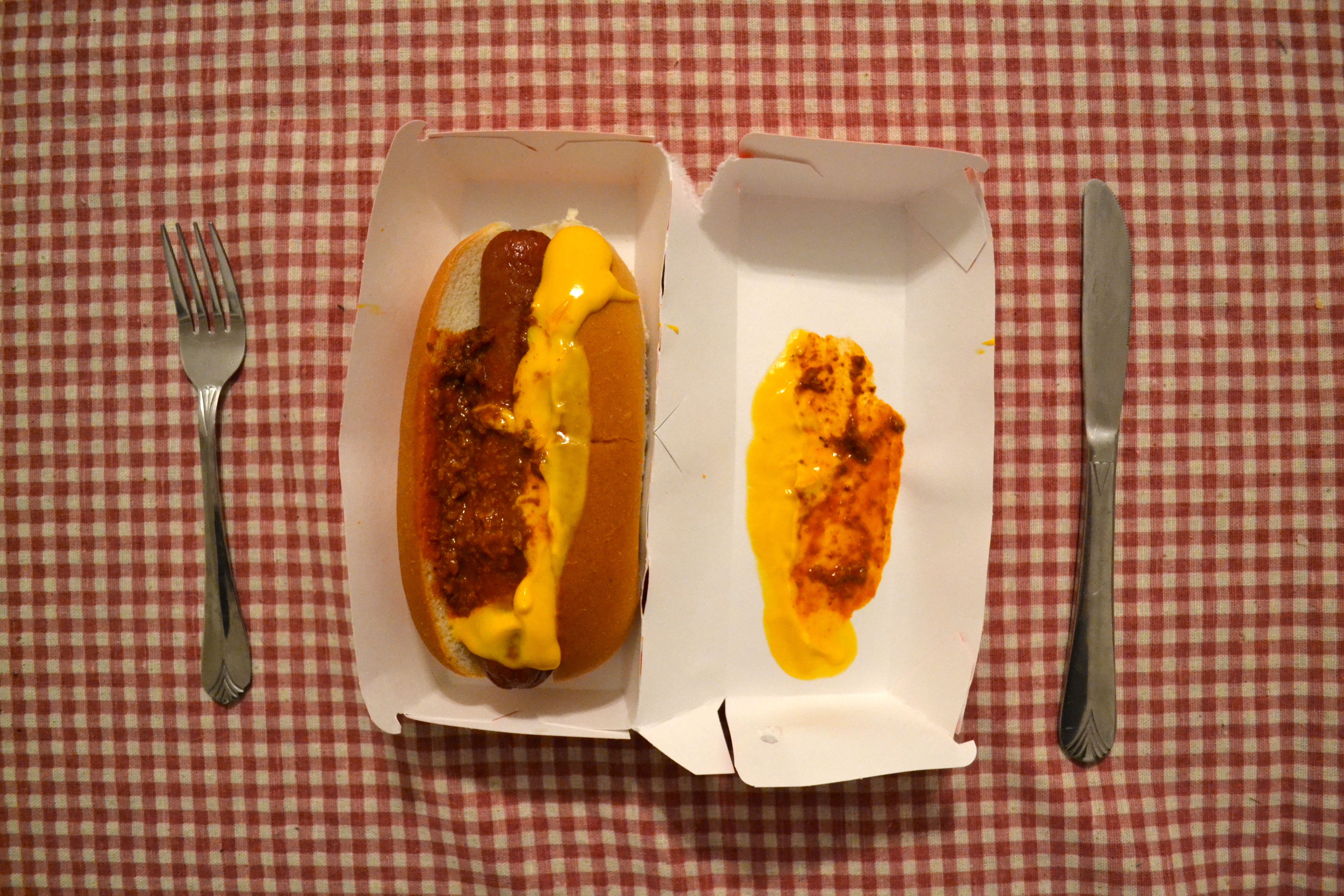 7-Eleven is a great place to go for a bag of chips or soda, but their prepared food is widely known to be hellish. Usually when I spot a stranger ordering nasty snacks from one side of the franchised plexiglass, I mark him or her as someone I want nothing to do with. The kind of person who eats buffalo chicken rollers and questionable burritos regularly is not someone I can identify with. So in my journey to drunkenness and disgusting enlightenment, I ordered the grossest things I could find.

This snack gave me the creeps long before I covered it with chili and self-loathing. This was my first taste of a 7-Eleven hot dog and it lived up to my expectations of being overly processed and overpriced, even considering its $1.99 price tag. And guess what? The chili and cheese were free! According to 7-eleven.com, “every Big Bite is made with 100% beef and specially seasoned to perfection. So good your stomach will high-five itself.” Just two bites of this hot dog and my stomach was ready to call it quits. My tastebuds wanted to punch me in the face, and angels wept in heaven. The real deal breaker for this pup was the cheese I’d drenched it with. Long before I got home to investigate the true identity of a 7-Eleven Big Bite, its already gluey texture congealed in thick globs to the dense sponge of the hot dog roll. Thinking about it now makes my skin crawl.

What kind of sick human created Doritos Loaded? This horrific creation is up there with YOLO-ing and flower crowns, a reflection of our culture taking what’s trendy and absolutely mutilating it until it’s terrible and sold at Kohl’s. It’s like some villain took a classic chip and injected it with hatred. The neon crust, the indigestible cheese, the jaw-dropping barbarity!

It’s important to note that when commissioning this cheerless pile of edible worthlessness, the clerk took his time to make my order “fresh.” Meaning, he heated four orange triangles in a microwave instead of giving me what had likely been sitting under fluorescent lights for hours. Regardless of his kindness, when I finally bit the nacho bullet and actually tasted these tiny bricks of 7-Eleven terror, I wanted to lay down and die. I would not endorse Doritos Loaded to anyone who has the least bit of self-respect. I would not advocate Doritos Loaded to anyone who wants to wake up tomorrow morning and greet the day with a smile. Eating this snack is a true form of suffering. It is immoral, it is wrong, and it is certainly not recommended.