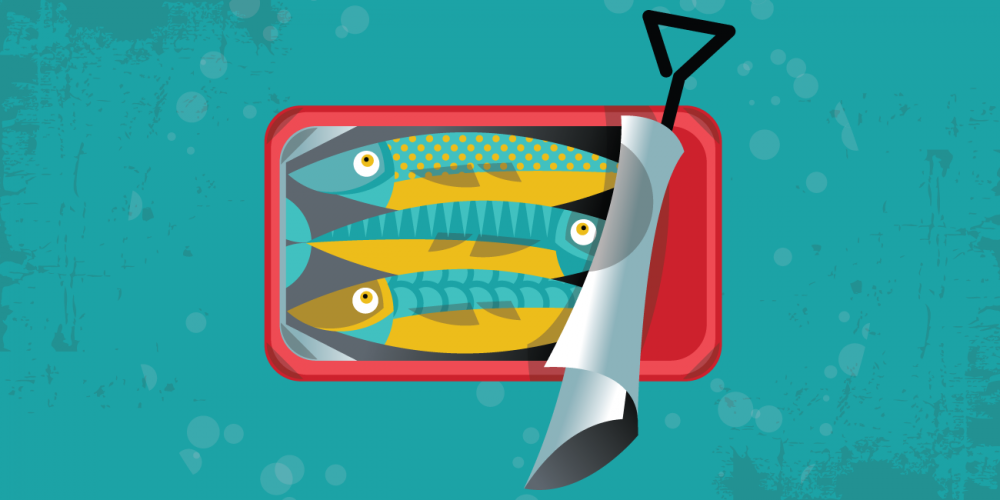 We asked nutritionists to share what they thought were the most underrated superfoods you should be adding to your diet.

“They are high in omega-3 fatty acids, provide protein, in one serving you get 25 percent of your calcium needs, and they are high in vitamin D,” Laura Hartung, RD, said.

Sardines are, also, kind of gross.

Instead of being admired for their health benefits, they’re used in gross-out blender concoctions, like in this YouTube “smoothie challenge.”

Their stronger fishy taste, similar to tuna fish, can be quite a turn off to some.

Kids are taught at a young age to avoid them. We blame you, Cloudy With A Chance of Meatballs.

Sardines are so unpopular that the nation’s last sardine cannery, located in Maine, closed in April 2010.

With all of this bad press, these little fish find themselves on the low end of the superfood totem pole.

According to the USDA database, one 3.2 oz can of sardines has 23 g protein. It also has over 350 mg calcium — more than a glass of cow’s milk. Sardines also are high in Vitamin D. Granted, these fish can also be high in sodium, so it is important to be aware of the liquid the fish are canned or flavored in.

“It’s a superfood in a can,” Lauren Dear, RD at Dear Nutrition, added.

We know they get a bad rap. But here’s why you should be eating them anyway.

They’re Inexpensive. A can of these fish packed in water costs on average $1. If you want to get fancy and pack the sardines in oil or even maple syrup the cans can then cost upwards of $4. Just avoid weird flavors, like mustard or BBQ sauce.

They have a long shelf life. Avocados, kale and your other typical superfoods go bad within a few days. Canned sardines can last as long as five years if stored properly, according to the FDA.  Even when you haven’t gone grocery shopping in weeks, you’ll always have sardines to get you through.

You don’t have to clean any pans. BECAUSE THEY’RE ALREADY COOKED!

They’re the better choice for the planet. This fish is low in mercury, but eating sardines also has the potential to rebalance the marine ecosystem. A study reported by the Guardian suggests that by consuming more of the fish on top of the food chain and less of the forage fish, like sardines, the population of forage fish has increased, throwing off oceanic ecosystems.

They’re versatile. You don’t just have to pop sardines out of the can like candy. Put the in sauces, or have them on top of a salad. If you need a quick snack, the fastest way to eat sardines is to mash them right on top of a cracker. Because…THEY’RE ALREADY COOKED. Seriously, who has time to turn on the oven?

You will probably like them. It just may take a few times. Hartung stressed reintroducing food into your diet does take about 10-12 taste testing opportunities, even for adults, to like a new food.

They’re not really sardines. What? We know. Sardines is a term to describe a small version of the herring family. An actual sardine will come from the pure Mediterranean waters — hence the name sardine after the island Sardinia. So if eating sardines is more of a mental barrier for you, here’s the rationale you needed to convince yourself to give it a try.