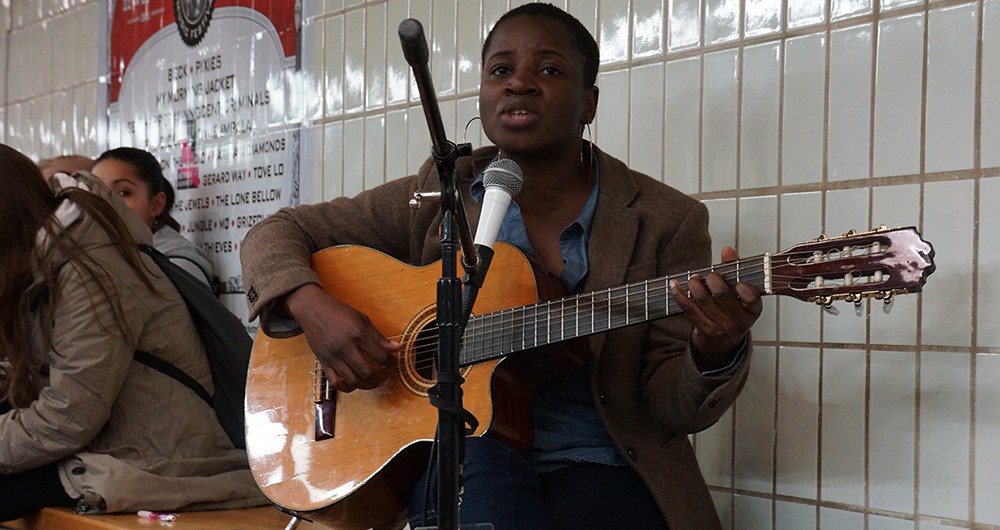 The following busker is of this variety. Her performing personality is quiet. She doesn’t stand out and entertain as much as step into the background and enhance the natural environment a little bit, acting almost like a soundtrack, but in a way that colors a place. You see it differently than you normally would because of what she adds to the atmosphere.

Sweet sounds waft into your consciousness and sharpen all of your senses, but you may not even notice where the sounds are coming from until a day when she isn’t there. 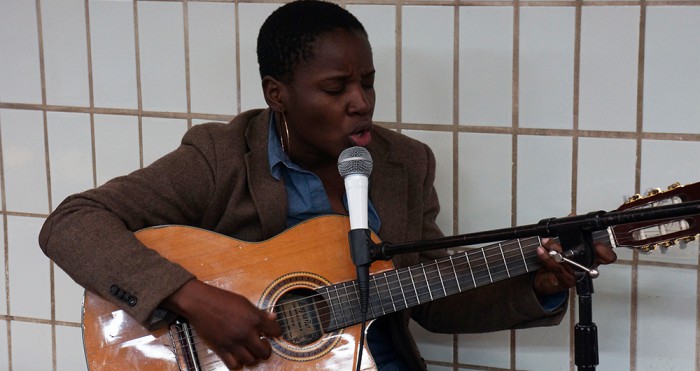 Lost in your thoughts, you only barely notice that they have incorporated spare, lullaby-like guitar plucking. You become more fully conscious of Ruthamar’s presence when her warm, slightly husky voice begins to weave around you, and then…

…You are in a (French?) black & white movie, waiting for a train on a nearly empty platform. Your train comes and goes, but you stay rooted in place. The chanteuse begins a tender rendition of Ne Me Quitte Pas, and the scene fades to black as the credits begin to roll.

“I used to play blues when I first started, but I found that people love the ballads. And they love the French so much, so I have to stick a little bit with it. I do play some blues and R&B, but mostly ballads.”

She’s been gracing Red, Orange and Green line stations with these and her own songs since she moved here from Port-au-Prince three years ago.

“In Haiti, I’d been singing since I was 8. In church, in school—anywhere. I would go out and I would sing. When I came here it was so hard for me to find a church. I was speaking with my dad and saying ‘I wish I could do something like that’ and he said ‘no’ because in Haiti if you’re really busking, people will think that you’re starving you know? It’s really different than here.”

“I wasn’t expecting that much—I was doing it for fun. But it’s like my life’s story now. I’ve quit my job so many times just to sing on the street. I love it so much.”

Still, she worries that many people see busking in the same way that her father did. “Some people think it’s for homeless people, it’s a really dirty job, you know. I don’t want people to think that way. You have to stop and listen before you judge anybody.”

What does she love so much about it?

“I really didn’t think that I could do so much musically—that I could touch somebody. For instance, a lady came up to me at Park Street crying. She was like ‘I was having such a bad day, but you made my day, thank you so much for doing this’ and gave me $50. And another guy said ‘Can you play ‘Loving Arms’ by Etta James?’ He had heard me play it before, so I said ‘yeah, I can play that’ and the whole time I was playing, the guy was crying so much, I had to stop. He couldn’t even talk. And I was like ‘oh my god!’ I never would have thought I could touch people in such a way, you know?”

All of this in the subway?

“I have a lot of friends down there now, pushing me to go on stage, to do different stuff. They inspire me. As an artist, if you don’t get the motivation from yourself, you have to find it somewhere so that you can move on with what you’re doing. People from the subway, they’re not only giving me the time. They talk to me. They’re my friends. [Busking is] so much more than ‘go there and play and go home’.”

You can often catch Ruthamar on the Alewife-bound Red Line platform in South Station, but, as she explains: “I’m not sure if people know about how busking works, but it’s first come first serve, so it’s really tough. Sometimes you have to get there at 5 o’clock in the morning to get a spot, so I can’t guarantee I’m going to be in such and such a place on this day.” If she’s not at South Station or elsewhere, check out her website, Facebook page or YouTube channel.

Or, she suggests, go listen to “Peter” in Harvard Square. “I don’t know his last name, but he plays classical guitar. He’s been playing 30 years in the subway. He is amazing.”

Enter to win a pair of tickets to attend The Hess Collection Seminar and Dinner as part of Boston Wine Festival 2018 at the Boston Harbor Hotel on Wednesday, March 14th. END_OF_DOCUMENT_TOKEN_TO_BE_REPLACED

Abe Rybeck, founder and Executive Artistic Director of The Theater Offensive was in studio this morning to talk about ClimACTS! Bounce, which celebrates art loud and proud at Royale on Wednesday, May 3. END_OF_DOCUMENT_TOKEN_TO_BE_REPLACED

Melanie Gillespie is an author and the founder of Mel O’Drama School of Acting in Milton. She was in studio this morning to talk about her latest book Darlene and the Drama Queen and how acting can help kids to develop confidence. END_OF_DOCUMENT_TOKEN_TO_BE_REPLACED

We’re not suggesting coconuts migrate, but we are suggesting that you see Spamalot at North Shore Music Theatre, two weeks only, September 27 through October 9. Click here to grab your tickets, and click “more” to hear my interview with Brad Bradley, who plays Patsy. END_OF_DOCUMENT_TOKEN_TO_BE_REPLACED

You know Dracut, MA native Scott Grimes from television’s American Dad and ER. You know Bob Guiney from The Bachelor and The Bachelorette. But did you know the two are teaming up to raise funds for the Dracut Performing Arts Program? END_OF_DOCUMENT_TOKEN_TO_BE_REPLACED

Boston band Funeral Advantage is Tyler Kershaw. And Tyler Kershaw had a fun childhood, so it seems. END_OF_DOCUMENT_TOKEN_TO_BE_REPLACED

Perry put me on to daephne and the album blew my mind. END_OF_DOCUMENT_TOKEN_TO_BE_REPLACED