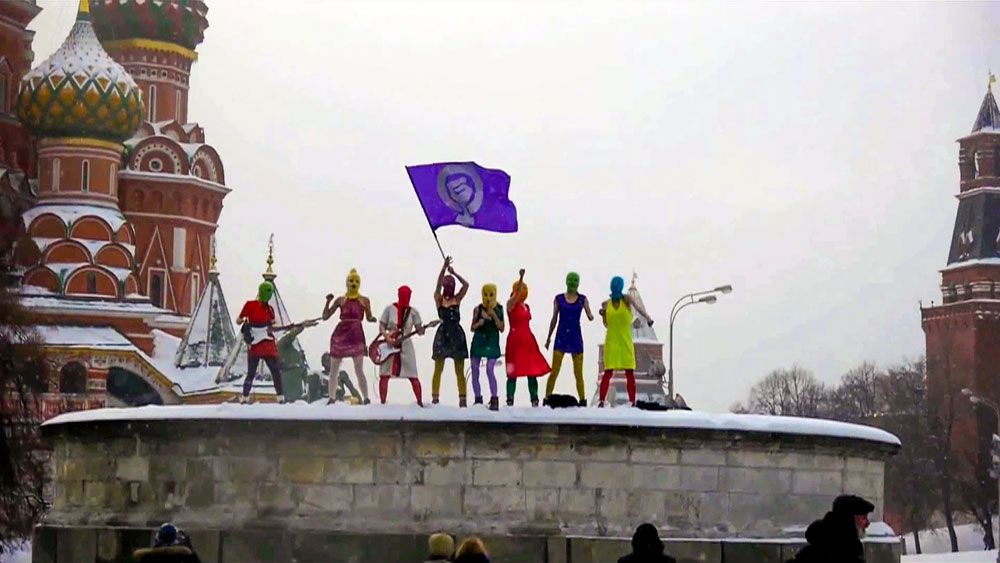 From Christian Marclay’s video loops to Laurie Anderson’s violin-record player, the Institute of Contemporary Art isn’t necessarily the first place to go if you want to hear music that you can hum. That’s because within the contemporary art world, music seeks to be more than just melodies and words. It seeks to be transcendent. That can be said for Jimi Hendrix burning his guitar or nearly everything about the way Michael Jackson danced. It certainly can be said for feminist Russian punk collective Pussy Riot, which is the subject of the new documentary “Pussy Riot: A Punk Prayer,” screening tonight at 7 p.m. at the ICA (the last film in its series “Art Over Politics,” which has centered on the crucial relationship between contemporary art and politics).

Director Maxim Pozdorovkin will attend the screening, sharing his portrayal of the three women arrested early last year at the “Punk Prayer” incident at Moscow’s Cathedral of Christ the Savior as peaceful intellectuals led through a farcical trial to be made an example of by the hardline Vladimir Putin/Orthodox Russian establishment. Nearly absent in the film are the typical conceits that anyone might expect in a film about a band. There is no conversation about how Pussy Riot found a drummer, or how the members shrieked the first time they heard their single being played on the radio. Instead, the film uses footage of performances to show how Pussy Riot utilizes snarling, easy-to-play punk rock (DIY!) as an irritant in spontaneous protest-performances organized in public places. They don colorful balaclavas both to protect their identities and to spread the idea that ego is not important to the band. Members themselves are interchangeable, so long as the message comes first.

Consequently, the fact that you won’t find legitimate Pussy Riot music on iTunes or Amazon is a point of pride for jailed members Nadezhda Tolokonnikova and Maria Alyokhina (the third convicted member, Yekaterina Samutsevich, was freed on probation). A commercial career was never the point. Bringing attention to the many social and political injustices explored in the film (like the political cronyism and institutional sexism within the Orthodox Church) was the point.

Director of Film and Media at the ICA Branka Bogdanov says that the music of Pussy Riot is only a metaphor for something far bigger. The constantly-changing legion of masked women are only wielding guitars as rebellious symbols to embolden themselves and to “stand up for their beliefs, and to articulate their beliefs.” The idea of music as a metaphor is something that Bogdanov says she sees as an essential component to contemporary art, where literal interpretations are usually not to be easily trusted.

“Even in the animation I am now preparing a new edition of our independent experimental filmmakers edition, the use of music is so different in that it is not used only to put you in a certain emotional state, but rather to help get the idea across,” she says. “In this way, the approach to music is much more creative.”

Bogdonov is also quick to remind that in the US, where rock ‘n’ roll originated, the Guerrilla Girl art movement of the mid-1980s was an obvious antecedent to Pussy Riot. As a Pussy Riot member in the film urges the viewer, “Anyone can take on this image. Masks, dresses, musical instruments, lyrics. Write a song, record some music, think of a good place to perform.”

That said, this is not just a film about activism. Pussy Riot’s music might be a lot better than some think. Keeping in mind the idea that these recordings were never intended for commercial release, the songs that exist in the film (and on YouTube and the blogosphere) are about as close to real punk rock as anyone supposedly “not doing it right” could get. Sighing at the contradiction?

The best place to start is not in the chaotic mess of “Mother of God, Put Putin Away” (the one that won the members a conviction for “hooliganism motivated by religious hatred”) or in the much more confrontational and hardcore sounding “Putin Pissed Himself” (although that’s a must-see video which really drives home the fear of speaking out in Russia). Rather, the musically curious should really start with the band’s minimalist, almost twee early works “Kill the Sexist” and “Kropotkin Vodka” — which almost sound like they were recorded in the bathroom while trying not to wake the upstairs neighbors. Sloppiness is not the issue in this pair of early recordings, but rather simply the amount of sonic artillery that they were able to pack in.

By “Putin Pissed Himself,” the group is already fully utilizing the physicality of punk music: jerking stops, sharp accelerations, and loud desperate vocals (really the only things that matter sometimes) shouted in group unison. It gets a little less interesting from there. Newer songs “Putin Lights Up the Fires” (incredible video) and “Like a Red Prison” are a less heartfelt in their urgency, but do raise the competency level to a grimy, post-Stooges headspace which shows that Pussy Riot, whoever the members are, is capable of playing contemporary punk rock as well as anyone. That’s not saying much, yet it says everything.

If anyone is unsure, take the Pussy Riot blind listening test. Try sneaking one of these newer songs into a playlist that includes similar strands of straight-forward, working-class, contemporary punk and see if anyone notices. Someone might, and maybe in a good way.

Musically, Pussy Riot is not a great band. But it’s not entirely forgettable — even if you don’t understand a damned word of Russian.

Enter to win tickets to see Trio Da Kali at The Villa Victoria Center of the Arts (Newton, MA) on April 10th. END_OF_DOCUMENT_TOKEN_TO_BE_REPLACED

END_OF_DOCUMENT_TOKEN_TO_BE_REPLACED

Enter to win tickets to Rhye at The Paradise on February 28th. END_OF_DOCUMENT_TOKEN_TO_BE_REPLACED

Her new album has been pushed back, but we have Kimbra’s new single for you. END_OF_DOCUMENT_TOKEN_TO_BE_REPLACED

The folk duo returns with a new record this week. END_OF_DOCUMENT_TOKEN_TO_BE_REPLACED

Now that we’re done looking back at 2017, let’s look ahead at 2018. END_OF_DOCUMENT_TOKEN_TO_BE_REPLACED

Our first Song of the Week for 2018. END_OF_DOCUMENT_TOKEN_TO_BE_REPLACED

In a year when so many things were off, the music was right on. END_OF_DOCUMENT_TOKEN_TO_BE_REPLACED