Rollin’ In the Dough: The Best Doughnuts In Boston 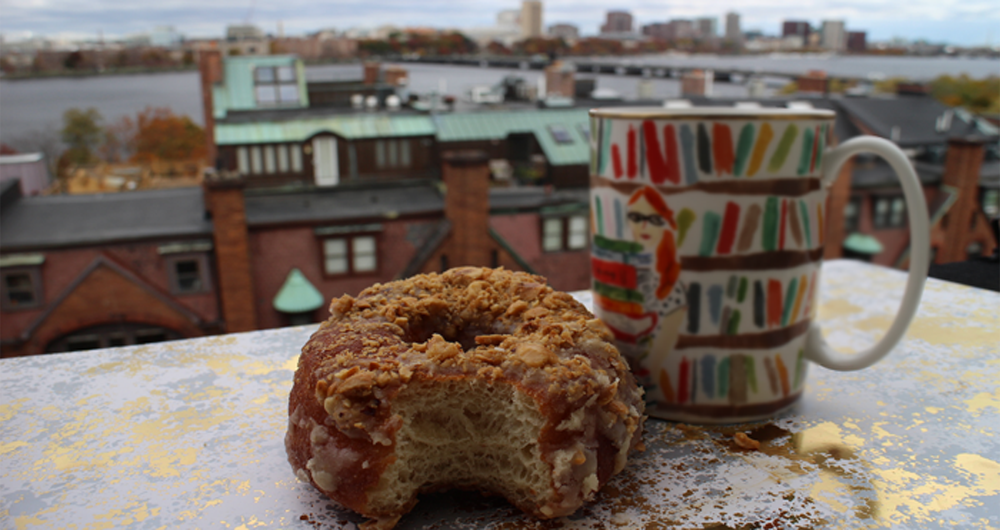 Today is National Doughnut Day so it only makes sense for you to know the best kind in town. It’s no secret that doughnuts have become the new “thing” here in Boston. Granted, the city already runs on Dunkin’, but if you look just a bit further past the pink and orange signs you’ll find some more innovative doughnuts Beantown has to offer.

From Kane’s to Union Square to Doughboy Deli, countless bakeries and little mom-and-pop storefronts are serving up mouthwatering, Instagram-worthy spins on your good old all-American fried dough. Now I’m not by any means a doughnut connoisseur, but after scouring the city for the best of the best, I can tell you that there are some bakeries and some flavors that you are not going to want to miss. Red velvet, Boston cream, apple cider — it can be a bit overwhelming deciding what flavor to get, let alone where to go to satisfy your doughnut craving. But have no fear, I’ve compiled a list (in no particular order) of some of the most delicious classic and creative doughnuts you can find in the Boston area 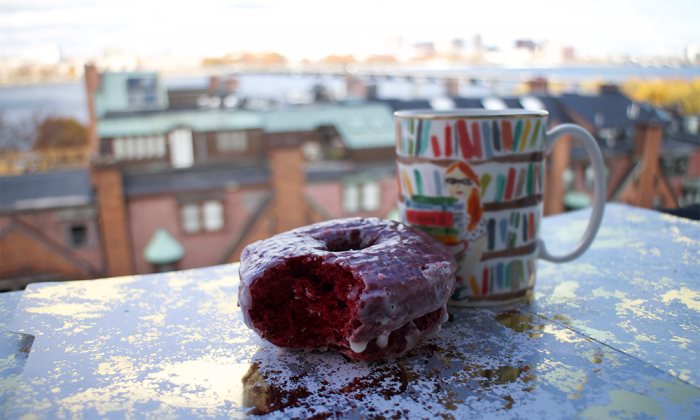 If you happen to be one of the many Bostonians without a car, I must warn you that it’s a hike and half to Saugus. But the hike is so worth it. Walking into Kane’s, I was a bit overwhelmed by the incredible selection — even in the late afternoon, the bakery still had at least 20 options left to choose from. While, of course, their old-fashioned glazed flavor was absolutely heavenly, I highly suggest trying their red velvet doughnut. I’ve heard of red velvet cupcakes, heck, even red velvet cookies, but I had never before come across a red velvet doughnut. The pastry itself was pretty thick, so I was expecting it to be delicious but a little dry and crumbly. But nope — every bite was perfectly moist and not too sweet, despite its sugary (but fantastic) cream cheese icing variation. 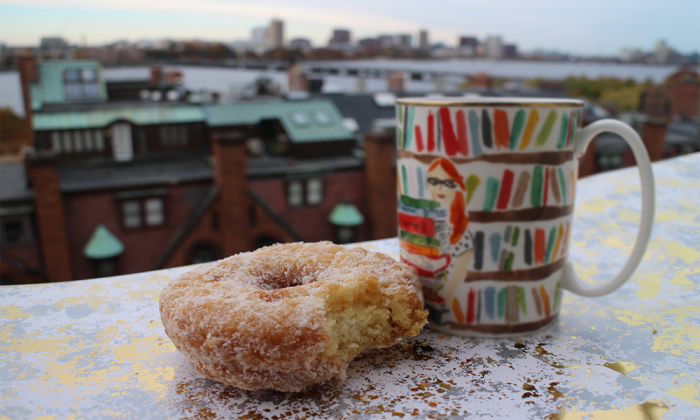 The first time I arrived at the ’50s diner-esque storefront, most of the doughnuts were sold out — with the exception of the coconut doughnut. I thought I was settling for this one, but even after going back and trying the other flavors, this stayed up there as my favorite. The nice thing about Twin’s take on the coconut doughnut is that it definitely had a crunch to it, but wasn’t overwhelmed by coconut flakes. Oh, and I should probably mention that they’re only about $0.85 each. So next time you’re in Allston late at night (which I know isn’t very far fetched), definitely swing by Twin Donuts — they’re open at 4 a.m. 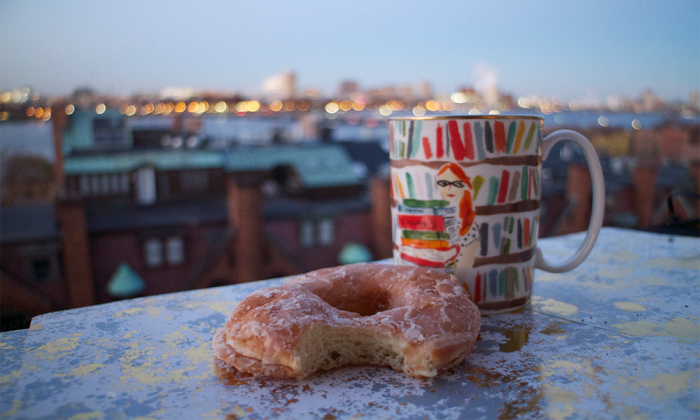 It pains me to include this picture because it truly does no justice for the godliness that is this pastry. As one of the first stops on my doughnut expedition, this pastry was inevitably flattened by the end of the day. And even though I didn’t get to sink my teeth into it until hours later, it still ended up being one of the freshest and tastiest doughnuts of the entire lot. Glazed to absolute perfection with a sweet, almost buttery honey-flavored icing, this pastry literally melted in my mouth. Of all the doughnuts I tried, this one was gone the quickest. 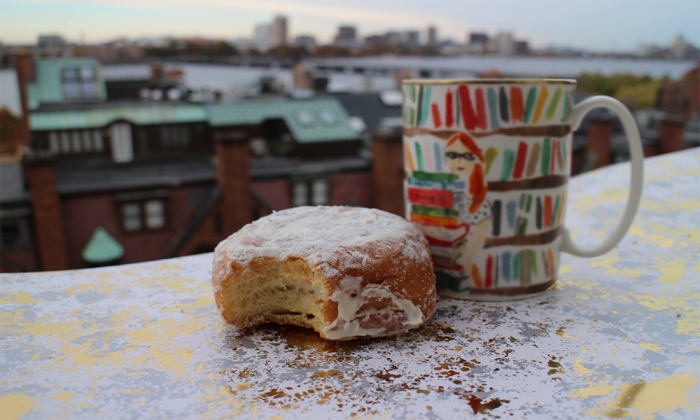 “I want to meet Verna.”
That is exactly what I scribbled down in my notepad after visiting this quaint little bakery on Mass. Ave. The funny thing about that note is that I wrote it after trying Verna’s take on the Boston cream doughnut, and I usually hate — no, abhor — Boston cream doughnuts. But oddly enough, this one was love at first bite. A lot of bakeries seemed to overdo it with the filling and the powdered sugar to hide the staleness of the dough, but not Verna’s. The vanilla filling, while still pretty sweet, complemented the fresh dough so nicely, and I will for sure be heading back there for another one of these iconic doughnuts. 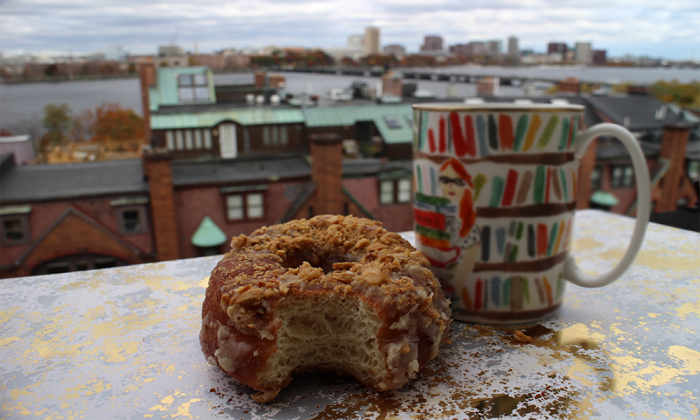 Ah, Union Square Donuts. Now I’m sure you’ve heard (or at least seen pictures) of the Instagram-worthy goodness that is Union Square Donuts. While I will warn you that these gorgeous (yes, I just called doughnuts gorgeous) pastries are on the pricier side at $3.50 each, they are well-justified by their weight, size and utter deliciousness. I highly suggest you try all 15 or so of their innovative flavors, but if that’s not feasible, I would definitely opt for the brown butter hazelnut crunch doughnut. In terms of food in general, this doughnut happens to be one of the best salty-and-sweet combinations that I have ever tasted. There’s a nice salty crunch in the hazelnuts that pairs perfectly with the sweet (and also a tad salty) brown butter icing, and it works so well. Be sure to check out Union Square’s Somerville location, or keep an eye out for its pop-up shops and farmer’s market appearances around Boston. 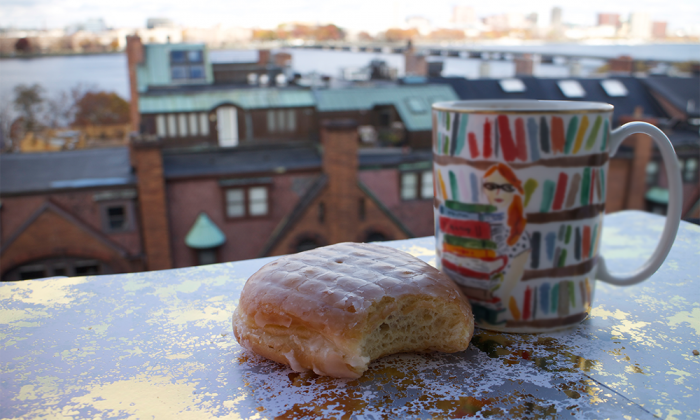 To be perfectly honest, this was another one of those doughnuts (like the Boston cream flavor) that I was a bit reluctant to try, as I’m not a big fan of jelly. And once again, I was proven wrong. The charming Medford storefront’s signature honey-dipped doughnut was great, but its jelly-filled flavor was even better. The dough itself was sweet and fluffy, coated with a perfectly-flaky and mouthwatering icing that is consistent in each of Donuts with a Difference’s pastries. And the jelly, much to my surprise, was neither too sweet nor too overpowering — put simply, it was perfect. If you’re looking for a good classic doughnut, this is the place to go. 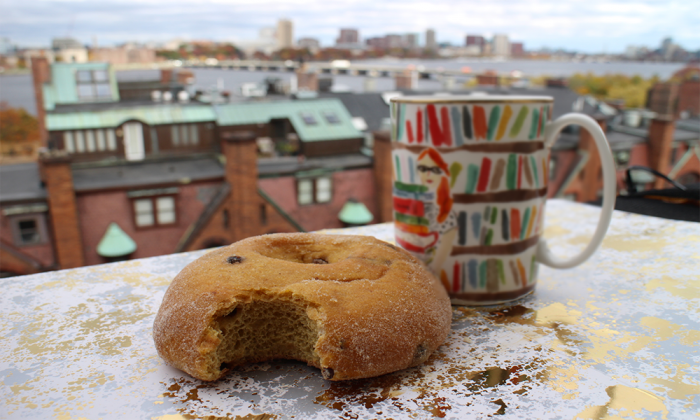 Clear Flour Bread was one of those places I happened to stumble into while walking around the Brookline area one morning. Even just glancing into the windows, you’ll see that Clear Flour has this awesome transparent, open layout where the bakers are literally standing right behind the cashier, hand-making the pastries. Given the atmosphere and incredible scent of the bakery, I had high expectations for their pastries — and my expectations were met, exceeded even. If you’re ever in the pursuit of a fresh, unique take on the pumpkin flavor, I highly recommend trying their pumpkin currant doughnut. While the fluffy and absolutely incredible dough was the highlight of this pastry, the dried berries and light sugar coating tied the entire doughnut together. 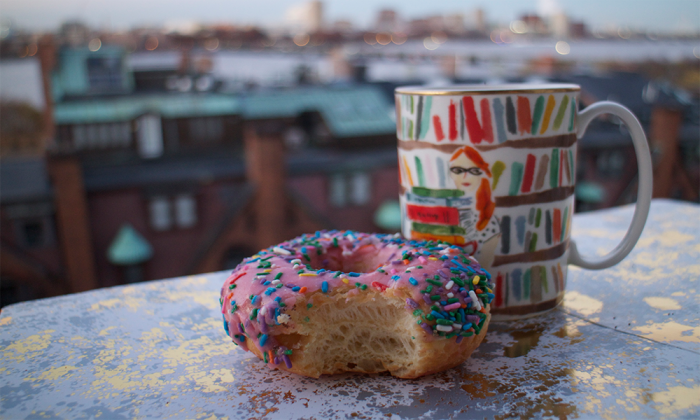 “Mmm…donuts.”
Homer Simpson would be in heaven if he ever made it from Springfield to South Boston to try this doughnut. Located just a few stops away from South Station, Doughboy Donuts & Deli houses what I’ve found to be the most delicious strawberry-iced doughnut I’ve ever had the pleasure of trying. At first glance, this doughnut is about as typical as it gets — pink icing, colorful sprinkles. Even the pastry section of Doughboy’s bared a rather striking resemblance to Dunkin’ Donuts. But at first bite, this doughnut was a different story. The icing itself had the most perfect strawberry scent, but the dough took the cake (or doughnut?) with its fluffy texture and fresh taste. As tempting as it is to just waltz into any one of the thousand Dunkin’s we have in Boston, I definitely suggest taking the train a stop or two extra to try out Doughboy’s. 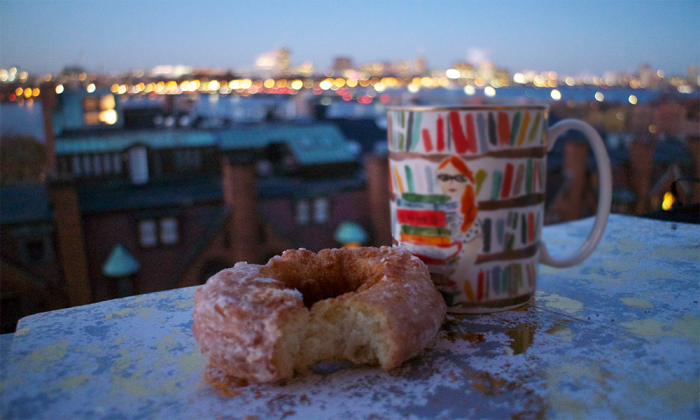 Of the entire lot of doughnuts that I’ve tried, this one takes the prize as the perfect fall and winter treat. I found that a lot of other bakeries worked an overpowering apple jelly or compote into their pastries, but Mike’s kept it simple — exactly why I enjoyed it so much. The delicious thing about this take on the apple cider doughnut is that it was delightfully crunchy on the outside, but still a bit moist on the inside. And despite not having an apple-filling, you could definitely taste the apple flavor, which even had a little spice to it.