Do you think you could be a pro fighter? Take a look at these violent photos, then get back to us.

Maybe it’s Sunday morning, and you’re a bit hungover. You’re still running on adrenaline from the night before, and the residual alcohol has you feeling brave. As you scroll through Facebook, you notice a video from Saturday night’s UFC title fight. You watch the fighters walk out, marvel at how alive they must feel — to be free from the shackles of civilized society’s natural currents of passive aggression, to compete — and say to yourself, in your primitive state: “I want to do that.”

Before you follow that train of thought, take a look at this photo.

Robbie Lawler defended his UFC title with his face split in two. Seriously…look at that lip. This man defines MMA. pic.twitter.com/1q5My3iC0J

It’s of Robbie Lawler, the UFC welterweight champion. On Saturday night, he defended his title against Rory MacDonald. The title defense was successful.

He won the fight. 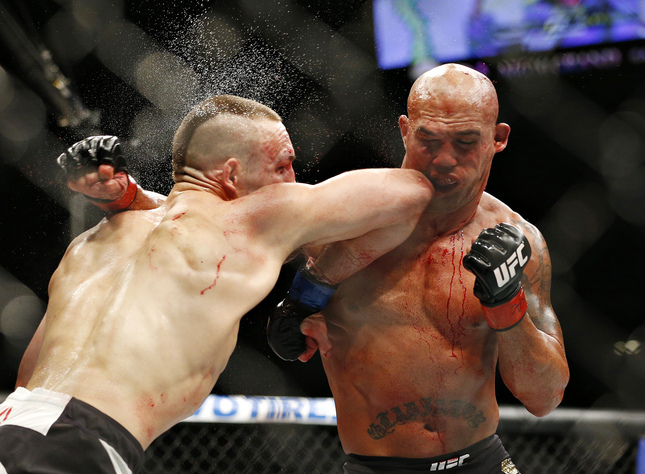 What the hell! He won the fight.

Half of his lip is hanging off!

“Robbie Lawler’s lip, if you could’ve been in the Octagon and saw this lip, he would talk and this part of the lip would move and the other part wouldn’t,” said UFC president Dana White, about the guy who won the fight.

The man he beat was worse off: MacDonald suffered a broken nose and foot, and, in the fight’s immediate aftermath, reportedly didn’t know what year it was. 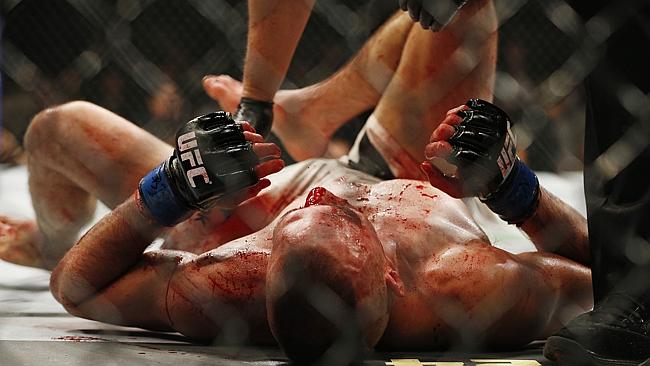 He later posted this photo, and confirmed his injuries.

broken nose broken foot but ill be back pic.twitter.com/KAakEC0qTh

After their fight — which was one of the best in recent memory — they posed together in the hospital as a sign of mutual respect.

thank you @Ruthless_RL @ufc @Firas_Zahabi this was the best time of my life, ill never forget this fight pic.twitter.com/vKgWD6mp6e

[h/t MMAjunkie, the best MMA site there is]