Recipe: Getting Buzzed Off of Homemade Phrosties 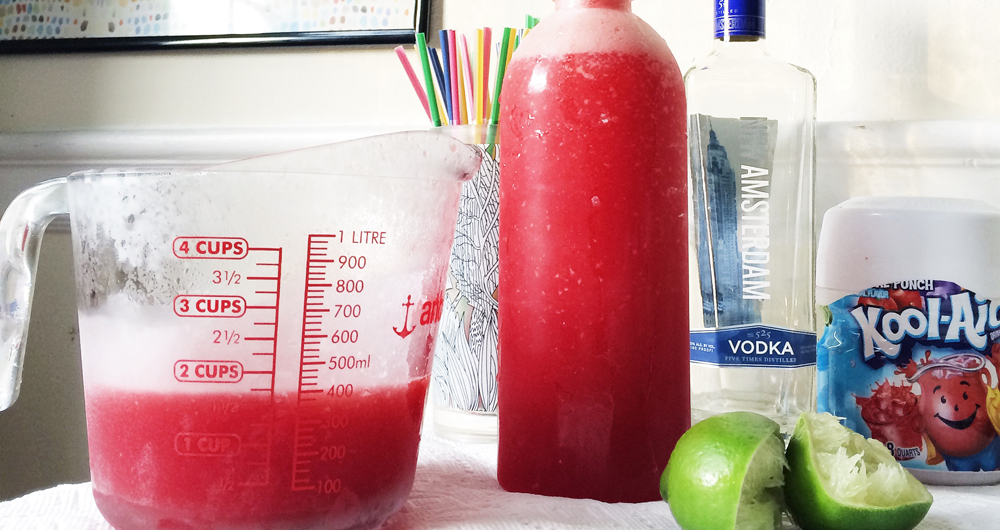 Phrosties were a sort of (totally) illegal, pseudo-underground (in the way that everyone knew) operation that sold mysterious plastic bottles full of sugary sweet alcoholic slush in various bright shades — like a rocket pop-inspired red, white, and blue, with the sugary sweet kick from a rumored addition of cough syrup.

The private Instagram-based @Phrosties business quickly generated multiple copycats, and when the original recipe was as elusive to begin with, it’s relatively alarming to imagine what came in the knock off. Equally alarming was the original account’s overwhelming success. By mid-May, at the height of its popularity, Swagger New York reported @Phrosties had more than 11,000 followers.

In May, GrubStreet bought a batch and the ordering process they described as follows:

“To get some, you just request to follow the semi-official Instagram account, which gives you access to the necessary phone numbers. Text the right one for your borough, then wait for the delivery person to show up. They arrive with Igloo coolers full of Phrosties, priced $10 each (plus tip). The flavors have names like Blue Hawaiian, Dragonberry Colada, La Phiesta, and Hero. Good luck figuring out any of the actual ingredients. All told, the entire process took me like two hours.”

Two hours! And then a stranger — or as Bedford + Bowery recalled from their own experience, “a rather youngish looking kid” — shows up with a delicious, possibly dangerous treat for you and all of your friends, for a mere $10 a pop!

Sounds too good to be true? Ehhh… But like most borderline great/terrible ideas, this one came with the potential for extreme hangovers, minor brushes with the law, and the general sense that you’re doing something that you really shouldn’t be, that just doesn’t come with a regular trip to the liquor store anymore.

When you’ve got Phrosties, you’re really living. They were sort of like if 7-Eleven had suddenly started making Four Loko-flavored Slurpees with the full alcohol and sugar content of the original drink. Plus, you ordered them from a random anonymous account on Instagram. So of course people went nuts for them.

Phrosties gained rapid media attention, food, city, and culture blogs were hammering down to discover the secret story behind the account, many of which ordered the drink for their friends and colleagues for “research purposes.” (This is totally something I would do if this had happened in Boston.)

“Amazingly, virtually zero hangover symptoms were reported. A good (if slightly disconcerting) time was had by all,” wrote Molly Fitzpatrick of Swimmingly.

“The sugar high resulted in childlike behavior and destructive tendencies, and was hard to stomach for some. Thankfully the large straws aided in faster consumption,” reported Bedford + Bowery’s Nicole Disser.

Honest Cooking outlined the dubious process of buying a Phrostie, heavy emphasis on the dubious, but then failed to describe what they actually did with the “Hero and Tropical Tsunami” drinks they picked from the back of “ a stocked cooler in the back of an idling black van.”

As lawmakers zoned in on banning the business, Daily Intelligencer finally had enough sense (and willpower against consumption) to send a Phrostie to a lab for testing. They concluded, “EuTech found the sample was 12.3 percent alcohol, or 25 proof, approximately the same as wine, plus 5.9 percent sugar. The lab did not detect any Codeine.” The ingredients were no shadier than your average glass of Moscato, and the lab techs mused that it may be no more than a concoction “Kool-Aid, or something like that, some standard alcohol, Bacardi, and then mix the two together, with ice.”

The “Psycho Juice” effect was a placebo. High alcohol content fueled by the social media over-sharing generation, and vice versa. Rumors of codeine (or as I had always assumed, crack) were proven false. But selling alcohol without a license (to probably lots of minors) is still illegal and Phrosties were put out of business by mid-summer.

But there are recipes. Oh, there are all kinds of recipes. None of them contain cough syrup (or crack!) but like a Pinterest board to keep this small facet of hipster culture alive, Phrostie recipes remain a tried and true memorial to this now defunct summer sensation.

And while Phrosities never made it to Boston, we decided make our own. Just in time for Labor Day weekend. They’re not authentic at all. Unless you count the fact that they’re syrupy-sweet enough to get you scrape your tongue with your teeth after every sip and boozy enough to convince you that you should rekindle your short-lived college love affair with grain.

But they will definitely get you drunk. And they’re delicious. And you don’t have to shop out of the back of a black unmarked van to get them.

I figure this is about a three-two-one ratio, as in three parts triple concentrate Kool-Aid to two vodka to one part creme de coconut. Ice liberally. This recipe is pretty loose, and I’m sure there’s some actual scientific reason why specific sugar to alcohol to water contents to maintain composition and turn to slush not liquid when blended. But I’m not a mixologist, and I’m going to assume neither were the founders of Phrosties.

I asked a few bartender friends to help me and they attempted to high-brow it up until I insisted on using Kool-Aid. There was a general (OK, indisputable) consensus that that would be gross and no one seemed to want their name tied to it. So I set off on my own and came up with the below. It’s tasty. I had a few sips and knew I was just minutes away from blowing up my own Instagram with #PHROSTIEPHEVER.

I attempted to get some friends to indulge with me and was told that they are/I am too old. So I pass my wisdom to you. It seemed like the right thing to do.

Make a batch of triple concentrate Kool-Aid — use three times as much powder as you would normally use for the amount of water — and pour into two trays. This will need several hours to overnight to freeze properly so plan ahead. Use your other three trays to make a fresh batch of regular cubes. Throw your vodka in the freezer, too. You want to keep it cool.

In a blender, add frozen Kool-Aid and ice cubes, 1/3 cup creme de coconut, and blend. Once frothy, slowly add in your vodka, 1/2 cup at a time, until three cups total have been blended.

Taste. Add more coconut, vodka, lime juice, or ice until an appropriate balance is reached. Pour into cups. Post it on instagram. Consume with caution.

Enter to win a pair of tickets to attend The Hess Collection Seminar and Dinner as part of Boston Wine Festival 2018 at the Boston Harbor Hotel on Wednesday, March 14th. END_OF_DOCUMENT_TOKEN_TO_BE_REPLACED

This year, the festival is welcoming more female wine producers than ever before, making up 20% of all winemakers that will be at the festival. END_OF_DOCUMENT_TOKEN_TO_BE_REPLACED

The holidays are here, so raise a glass. END_OF_DOCUMENT_TOKEN_TO_BE_REPLACED

‘Tis the season to mix a nice, stiff drink. END_OF_DOCUMENT_TOKEN_TO_BE_REPLACED

Warm up with Tito’s on your sweater and Tito’s in your glass. END_OF_DOCUMENT_TOKEN_TO_BE_REPLACED

There’s a ton going on at Idle Hands in Malden this spring. Dan McDonnell and Josh Deering joined me in studio to talk about Maifest, what’s new in the Taproom, and their collaboration with The Black Ale Project. Oh, and don’t miss Idle Hands at BeerAdvocate’s Microbrew Invitational next month! END_OF_DOCUMENT_TOKEN_TO_BE_REPLACED

Giovanna Guzman is the marketing coordinator at Kings Bowl, who you can visit in the Back Bay, Burlington, Lynnfield, Dedham, and soon in the Seaport. We talked beverages, naturally, seeing as it’s Thirsty Thursday. And we sampled sangria. And it was soooo good. END_OF_DOCUMENT_TOKEN_TO_BE_REPLACED

These five words might change your life: Farmer Willie’s Alcoholic Ginger Beer. Co-founders Nico Enriquez and Max Easton were in studio with me this morning. Nine-packs and kegs of Ginger Session coming next week! END_OF_DOCUMENT_TOKEN_TO_BE_REPLACED

Chef Avi Shemtov–he of the Chubby Chickpea and Single Guy Cookbook–was back in for a visit this morning to talk about his latest venture. TAPPED is a mobile beer catering company that specializes in on-site draft pours of both craft beers and mainstream brands. Thirsty yet? END_OF_DOCUMENT_TOKEN_TO_BE_REPLACED